The Northeast Canyons and Seamounts Marine National Monument was designated by President Barack Obama in September of 2016. It was the first such marine monument designated in the Atlantic Ocean, lying roughly 130 miles southeast of Cape Cod. The designation protects 4,913 square miles from energy exploration, undersea mining, and most commercial fishing (with exceptions) in order to protect fish populations and a variety of endangered species, especially Sperm, Fin, and Sei Whales.

Of particular interest and consequence to birders, it has recently been discovered that Atlantic Puffins winter in the area, perhaps even a goodly portion of “our” birds. What would happen if a Deepwater Horizon-like disaster happened out here? Would decades of puffin restoration on Maine’s islands be for nothing? What about the tourism, jobs, and pure enjoyment that puffin tours along the Maine coast create? What about the future of an iconic species that already has to face to challenges of drastic Climate Change and severe overfishing? 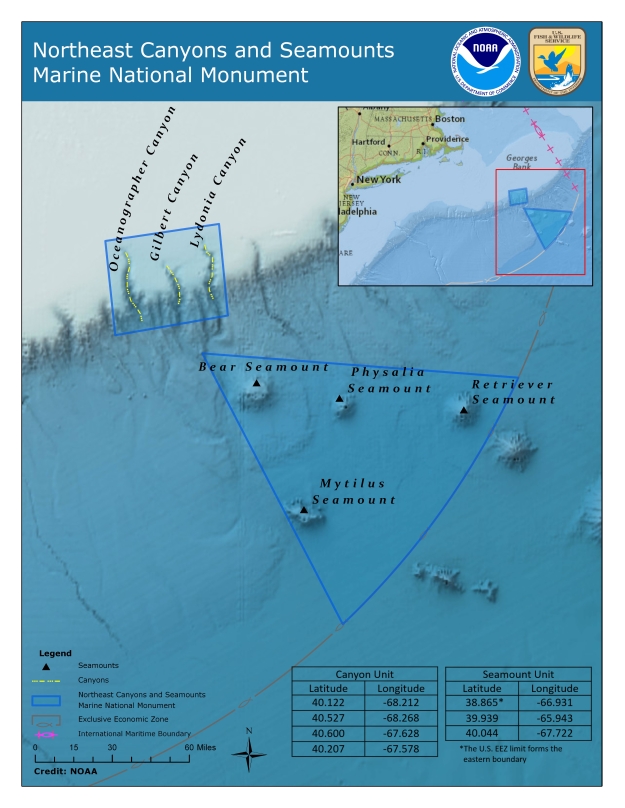 In April, “President Donald Trump signed two executive orders – the first calls for a ‘review’ of 27 large-scale monuments on land and in the ocean, and the second takes direct aim at marine monuments and National Marine Sanctuarues. The Northeast Canyons and Seamounts Marine National Monument is a target of both orders.” That link, to the Center for American Progress, has a good overview of what’s at stake, and the likely beneficiary of an overturning of this designation (Big Oil).  Be sure to also check out the maps in that report, including the perceived distribution of wintering Atlantic Puffins and the overall offshore seabird abundance estimates (and then compare those maps to the fishing effort map!) Basically, the claims of impacts on fishing grounds is mostly a red herring (sorry, I couldn’t resist).

Here in Maine, it has been the review by Secretary of the Interior, Ryan Zinke, of the designation of the Katahdin Woods and Waters National Monument that has (rightly) received a lot of attention. His visit to Maine was thoroughly covered as he met with local communities, politicians, and business organizations. Press coverage has been widespread and thorough of the debate, such as this recent article in The Boston Globe.

I certainly support that monument designation, and I look forward to visiting it for the first time later this fall, but I will save that blog for another day.

But the review of Northeast Canyons and Seamounts Marine National Monument has received much less attention, especially here in Maine, despite its importance to our puffins. I believe birders therefore need to lead the charge in speaking out in support of the monument, which I believe is at greater risk in the Zinke era than Katahdin Woods and Waters. In no small part because not enough people are paying attention.

Personally, I think this whole “review” process is a dog and pony show – another weapon of mass distraction – from an administration hell-bent on gutting environmental laws. While we argue over the validity and value of each monument, Zinke and company are paving the way for more resource extraction at cut-rate prices on our PUBLIC land, even in National Parks. And attacking Endangered Species protections. Say good-bye to the Greater Sage-Grouse, for example, if this corruption continues.

But that doesn’t mean we shouldn’t keep fighting for each of them, and I believe Northeast Canyons and Seamounts is worth fighting for. For whales, puffins, and the future of fisheries in the Gulf of Maine.

Therefore, to start, please take a moment – if you have not done so already – to submit a comment in support of the monument’s designation. We only have until August 15th to do so. Simply click the “Comment Now” button on the upper right of the federal website linked above, and be sure to specifically mention Northeast Canyons and Seamounts Marine National Monument (and all of the other monuments that are important to you).Secretary Zinke is expected to issue his report on the review of all of the monuments on August 24th. We’ll learn more then about exactly what this process has been all about, and how far this administration is going to attempt to go to overturn anything accomplished during the Obama presidency. There will be plenty of lawsuits from all directions, so none of these fights are over yet.

So please, don’t be distracted by tweets, rhetoric, or grandstanding. The real damage is being done right in front of our eyes, through little directives, department policy initiatives, and countless other ways to undermine the economy, environment, and citizens of this country in order to line the pockets of the fortunate few.

I for one am not going go down without a fight. A fight that includes a fight for puffins!

A couple of additional references: