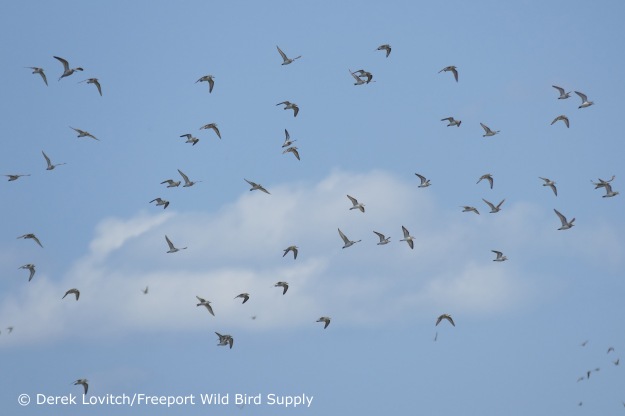 I spent the morning today on the incoming to high tide along the Eastern Road Trail in Scarborough Marsh (Site C1 in my Birdwatching in Maine: A Site Guide). It was a rather incredible morning; one of the best I have had here in several years. Therefore, since I know I have been a bit negligent on updating my blog of late, I figured I would share with you a little about the morning.

Twelve species of shorebirds – including a couple of rarer highlights, 6 ½ species of wading birds, Nelson’s and Saltmarsh Sparrows, and much, much more, made for a stellar outing. And with two Peregrine Falcons and a Northern Harrier hunting the masses, the pot was regularly stirred, giving me new flocks to sort through and study. But the constant shuffling did make it hard to make counts or come up with even remotely accurate estimates!

First, the shorebirds:
1000-1250 Semipalmated Sandpipers (including a few juveniles).
200+ Least Sandpipers (many juveniles)
150+ Semipalmated Plovers
63 Short-billed Dowitchers (including a few juveniles).
44++ Lesser Yellowlegs (including some juveniles)
40+ White-rumped Sandpipers (all adults)
16+ Greater Yellowlegs
5 adult STILT SANDPIPERS (first of year for me)
3 “Eastern” Willets (including one still-downy, late juvenile).
1 Spotted Sandpiper
1 WILSON’S PHALAROPE (first of year; no photos as the harrier flushed it before I could set up my phone-scoping adapter unfortunately. And I never saw it again).
1 BAIRD’S SANDPIPER (a fairly early juvenile, with a fair amount of wear already). 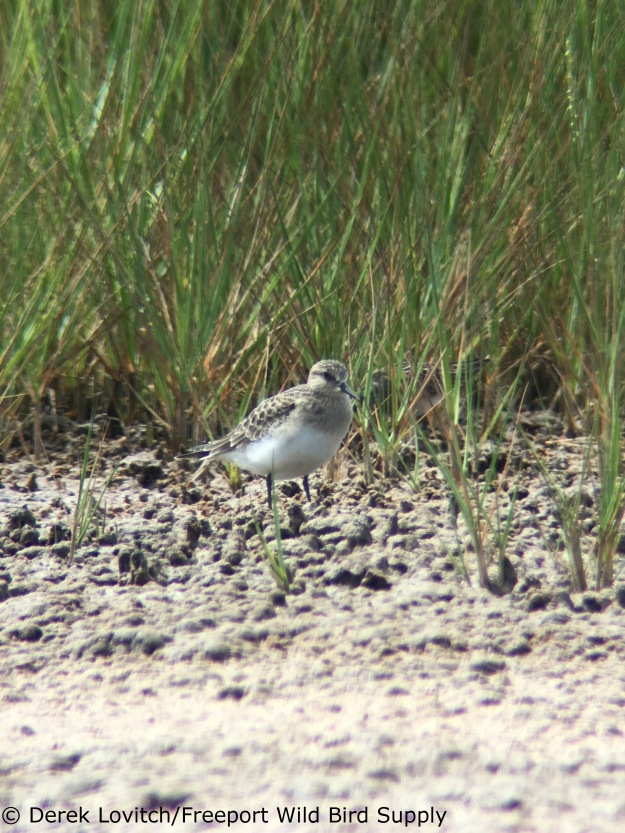 Finally! This individual – presumably – has been a nemesis for me this year, as it spent most of its time at Spurwink Marsh (where I did look for it a few times), and was never consistent anywhere early in the season. Now, it’s well on its way to molting into basic plumage, which would make its detection even harder at a distance, so I got lucky. In fact, it was about the last bird I looked at before I returned to my car! You can see the ghostly cast of the wide, white border around the face is fading with the growth of the new winter plumage, but the bright red eye and pinkish facial skin (less bright than it once was) remains. It was shocking how tiny it looked though – almost certainly a female – next to a larger male Glossy.

I also took some time to study some worn and/or molting “sharp-tailed sparrows,” most of which of course, were fleeting glimpses. However, of those that I saw well, most were Saltmarsh, and quite a few of the Salties were still singing. I also encountered one Saltmarsh with a bright orange juvenile in tow. Few were as cooperative as this one, however.

Other observations included three Bobolinks, a few Green-winged Teal, a small kettle of 3 Broad-winged Hawks and 1 Osprey overhead that were likely migrants, and a constant stream of Tree, Barn, and Bank Swallows. One Least Tern and several family groups of Common Terns also put in an appearance.

In other words…it’s August, and it’s a lot of fun in the marshes, mudflats, and beaches of Maine!

2 thoughts on “Tremendous Morning on Eastern Road in Scarborough Marsh, 8/7/17”