The reports trickling out of Monhegan all week were not particularly tantalizing. Other than a few rare but regular vagrants and semi-vagrants, the birding was often dreadfully slow. This fall’s lack of strong, airmass-changing and northwest wind-producing, cold fronts have been sorely lacking, and the season on Monhegan to date had clearly reflected that. But we heard the butterflies were extraordinary!

The first half of our group arrived via the 9:00 Hardy Boat from New Harbor. Even the boat trip was unusually quiet: a handful of Northern Gannets were the only seabirds we saw; even gulls were relatively few and far between.

But it was simply gorgeous, and with clear skies, light winds, and unseasonably warm temperatures, we were not complaining upon our arrival. And we were immediately greeted with a plethora of butterflies, led by Painted and American Ladies, and Monarchs – lots and lots of Monarchs.

Our slow walk up Dock Road would yield our one measly warbler wave of the day, but the Island Farm gardens on Pumphouse Road immediately produced the “best” bird that was being seen on the island: a juvenile Blue Grosbeak. But now, there were 2. And two Dickcissels! And 3 Indigo Buntings! And then two Blue Grosbeaks sitting side-by-side with an Indigo Bunting on the wire for comparison, followed by a lovely look at a Lincoln’s Sparrow.  Yeah, that’s a “slow” day on Monhegan in the fall!

After fueling up on Novelty Pizza as usual, we hit Burnt Head for a gannet and Peregrine Falcon show, but the afternoon was beyond quiet for birds overall. Not for butterflies, however!  So. Many. Question Marks (as in the butterfly, not unanswered questions of course!)

As we awoke on Saturday, light south winds had minimized nocturnal bird migration, and the Morning Flight over the Yew consisted of exactly one Great Egret (not a bad bird out here though). It was quiet, very quiet, as dawn rose…but we weren’t cold! And all of those Monarchs! 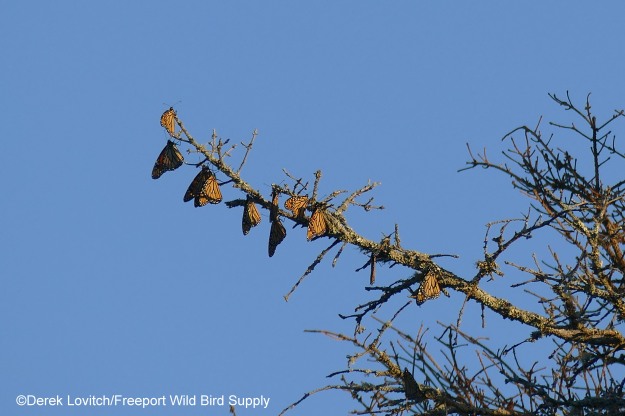 After breakfast, we decided to try and relocate a female King Eider that was reported yesterday and posted late at night. Since the seas were building on southwesterly winds, I decided to skip trying Lobster Cove and check the mouth of the harbor. And sure enough, there she was! The “Queen” Eider was an “Island Bird” for me, and an island bird for almost every birder on the island, if not a life bird for many in my group. 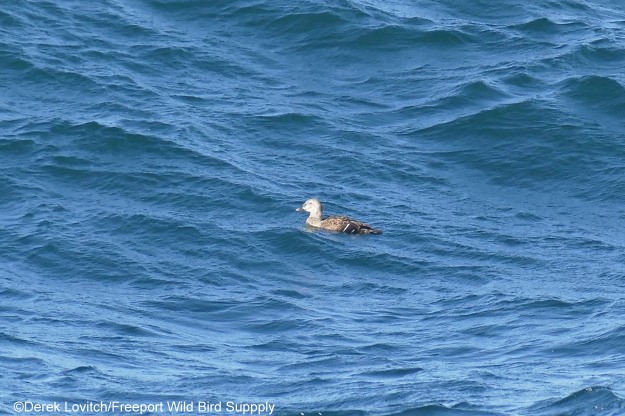 With the rest of the group arriving at 10:00am, we raced over to the dock, picked up the eider from the lawn of the Island Inn, and welcomed our new arrivals with a Queen Eider in the scope!  How’s that for a greeting?  I also realized I had a “lifer:” looking at a King Eider with shorts on!

There were now 3 Blue Grosbeaks in the garden, and a couple of us glimpsed a flash of a Yellow-billed Cuckoo near the Ice Pond.  But it was irrationally slow all day. However, almost every bird we did encounter, we saw well, and there were very few instances of “better views desired.”  And it was warm, and I don’t think I have ever spent a whole day out here in just shorts and a t-shirt.  Again. 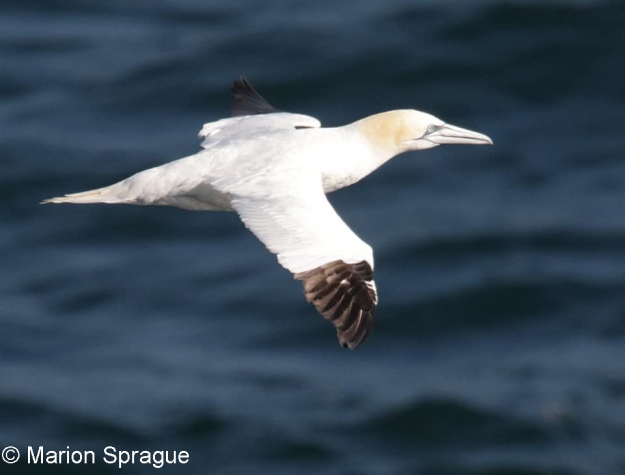 Northern Gannet off of White Head.

A slow progression of clouds throughout the day finally arrived overhead by dusk, but rain stayed away. Unfortunately, the cold front that we were so anxiously anticipating did not switch the winds to the west (and then northwest) until about 2:00am, so migration really never got going. There was a little Morning Flight come dawn, mostly Yellow-rumped and Blackpoll Warblers as expected, but also several Cape Mays. The chatter, however, was the fact that no one found themselves in dire need of more blankets overnight! 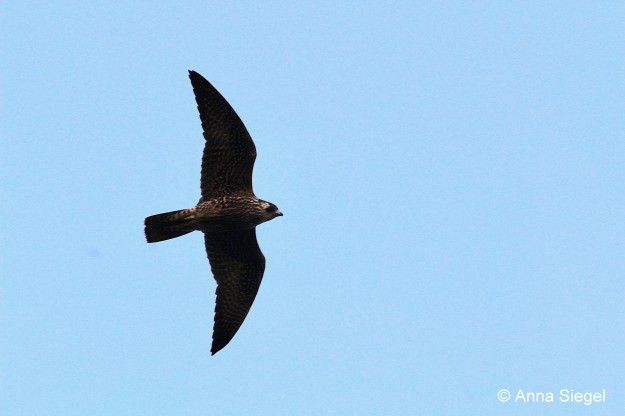 Once again, however, the warmth scattered roosting Monarchs, and the massive roosts of a thousand or more from the middle of the week were instead widely dispersed. They were still abundant, however, covering gardens and almost every patch of wild asters and goldenrods.

This one likely had recently taught a Merlin to never try and eat a Monarch! 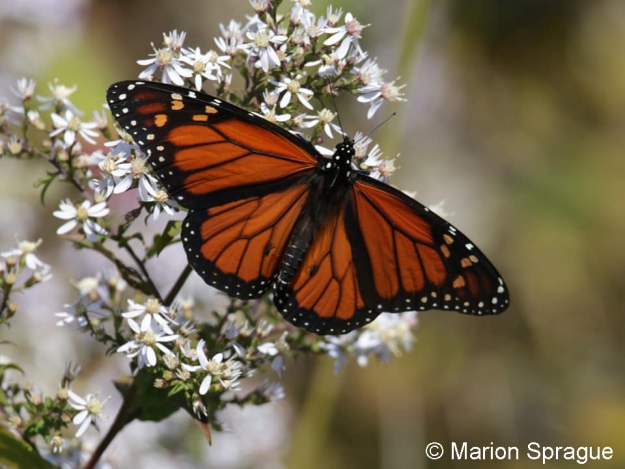 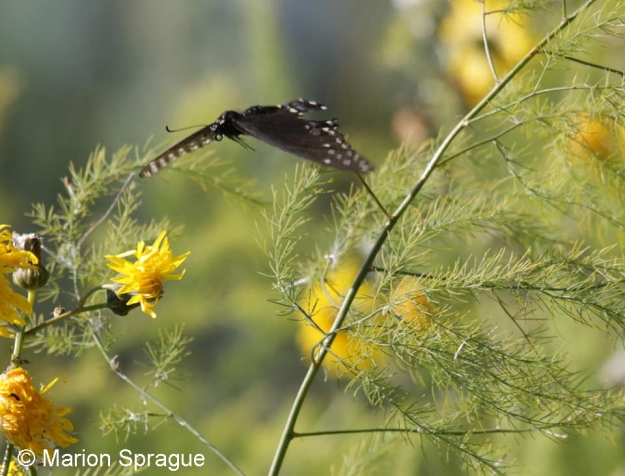 It was a day to look at everything, from flowers to caterpillars. 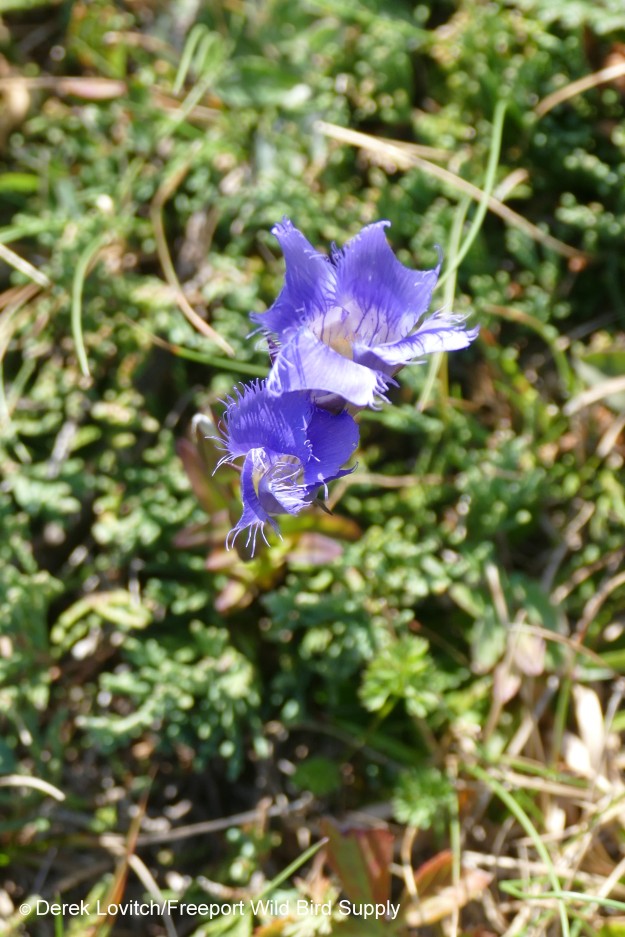 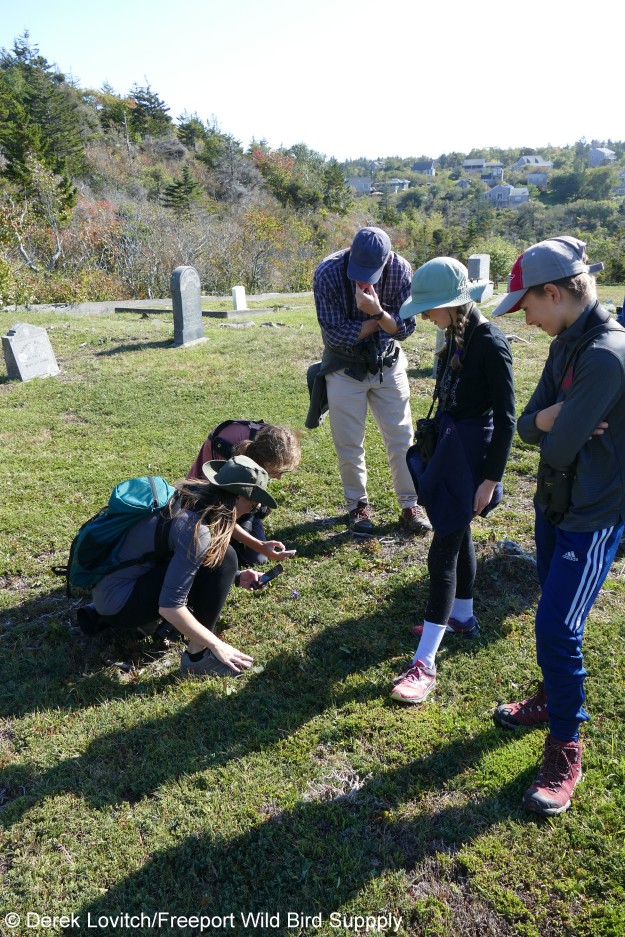 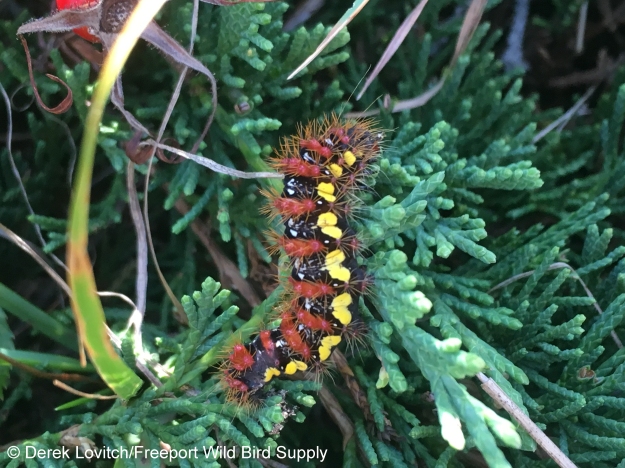 An adult Lesser Black-backed Gull in the harbor helped start our day, and there were definitely some new birds around. 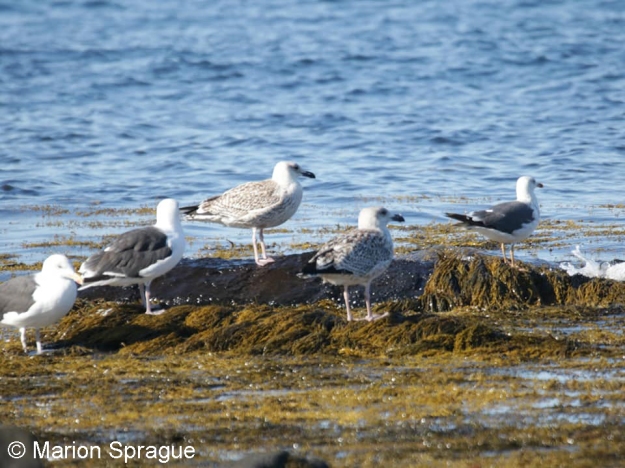 Our checklist slowly built with the likes of a Pine Warbler, a single Red-winged Blackbird, and finally, after almost 3 days: a couple of Red-eyed Vireos.  The northwesterly breeze was also ushering in a good raptor flight, especially Merlins and American Kestrels, with a healthy dose of Peregrine Falcons, so we often found ourselves looking skyward.

Monarchs were also on the go, with many high overhead and taking off towards the mainland. Our butterfly list grew to a goodly 14 species. And we confirmed via photographs that there were a most-impressive 4 Blue Grosbeaks, a bona fide flock, and perhaps a record high for the state.

It was a great few days, and a lot of birds were seen. It was not the thing Monhegan legends were made of, however, but almost everyone on the tour had at least two Life Birds by the time the majority of the group headed home on Sunday afternoon. And it was still beautiful out. Complaints were few. 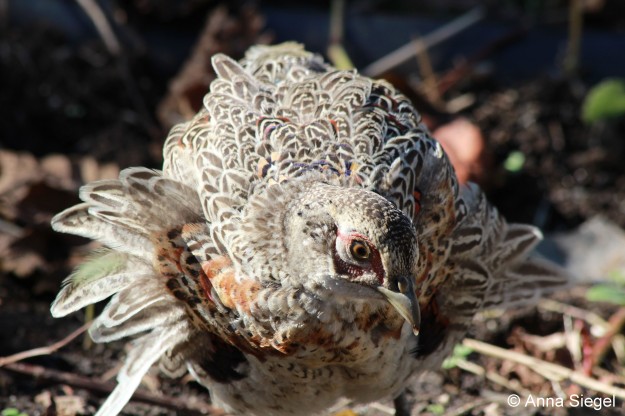 And the family group of “re-introduced” (allegedly) Ring-necked Pheasants were a source of constant entertainment.

Now, no birder is every really ready to leave Monhegan, but those who had to go to work or school the next day were especially upset. But of course, we had high expectations for a big day on Sunday, and that did not materialize.

On Monday morning – I am happy to say for those who remained, but I am very apologetic to those who had to depart! – the birds that did not show on Sunday had arrived. A huge flight overnight on clearing skies and a moderate northerly wind had ushered in a massive wave of birds. By breakfast we had as many species of warblers as we had seen all weekend so far.

Palm Warblers and Savannah Sparrows seemed to be everywhere, at least where there wasn’t a Yellow-rumped Warbler. New arrivals included many of the birds we had somehow been lacking so far, such as Blue-headed Vireos and Brown Creepers, but we also enjoyed a host of “late” migrants, such as Bay-breasted Warbler, Alder Flycatcher, several Magnolia Warblers, and – sorry Anna! – a great look at a Philadelphia Vireo. Although a truant Warbling Vireo late in the day was the “best” vireo of the weekend.

The morning alone had more species, and likely more individuals, than the three previous days combined. While all of the Blue Grosbeaks had departed, the Queen Eider was still present, as was 1-2 Dickcissels, and in a late-day feeding frenzy of Harbor Porpoise at the mouth of the harbor, we picked out a juvenile Lesser Black-backed Gull. Today was a day for both quantity and quality – and we walked about 30% less than any of the previous three days! It was a very good day. 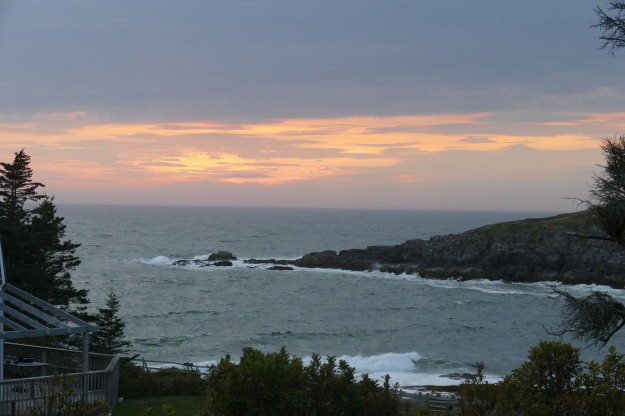 Jeannette had arrived on Monday, and it was just the two of us for a day off on Tuesday. Fears of a wash-out were not realized. Instead, an early morning shower on Trap Day did little more than nicely tamp down the road dust for a good part of the day.  Winds were increasing from the southeast, and there was little to no migration overnight on cloudy skies and light southerly winds.

Therefore, there was once again virtually no morning flight, but there were some new birds around, starting with a Marsh Wren singing at dawn from the meadow, and 3 female/immature Wood Ducks in the Ice Pond before dawn (alas, I never did catch up with the Yellow-crowned Night-Heron that others spotted into the weekend).

The morning was quiet overall, however, with scattered pockets of migrants here and there. It wasn’t quiet as slow as Saturday, but we were once again covering a lot of ground to not see many birds. But it felt like a day with something “really good” around, and as we returned to the Ice Pond, I was shocked by a hen Northern Shoveler!  Migrant dabblers are rare out here due to the lack of habitat, and there are not many shovelers in Maine or Maritime Canada to end up here. I am sure that if there were birders out here in April and October, this species would be detected, but based on the historical record in the Vickery checklist and recent records from eBird, it turns out that this is a First Island Record!  (EDIT: A previous island record has come to light, and sure enough, it was from April!) 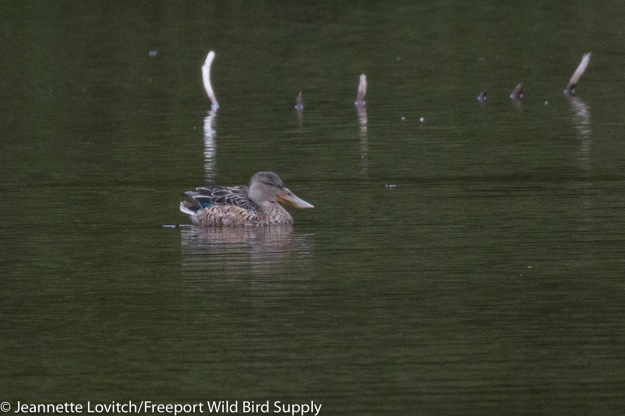 While it wasn’t the Mega I was hoping for, it was a great bird for the island list, and joined by a stunning adult male Wood Duck, it added some excitement to an otherwise dreary day. We took the time to have a leisurely lunch, enjoy the Queen Eider, and grab one last beer. We also ran into the Lark Sparrow that showed up the day before. But it was remarkable how many fewer butterflies were around: the Monarchs had mostly departed on the northerly winds of the previous day, and the cloudy skies kept most everything else under cover. 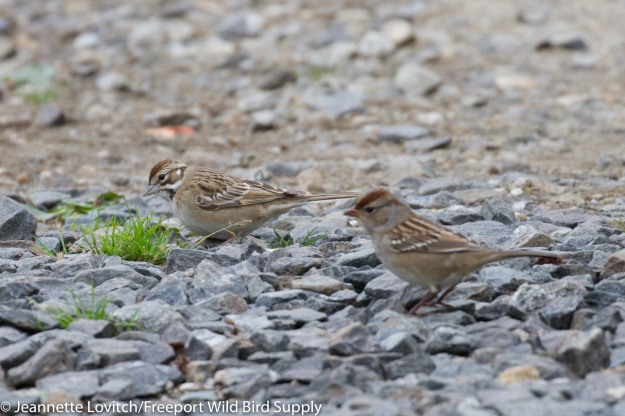 With the first of the morning’s lobster traps already being hauled up, we knew our birding season out here was drawing to a close, unfortunately. Fortunately, however, the seas were much tamer than had been forecast, and we had less concerns about comfort on the ride home.

Another Harbor Porpoise and gull feeding frenzy developed in the mouth of the harbor.

But Monhegan had one more surprise in store for us. As we pulled away on the 4:30 ferry to Port Clyde, I spotted a Black Skimmer circling Nigh Duck. I alerted the other birders on the boat, and those of us topside had views of it seemingly considering sitting down on the island, but we had picked up steam and were cruising away.  This appears to be the second record of Black Skimmer for Monhegan – another incredibly good bird for my island list, and another reason why you never stop looking!

Three “Island Birds” for me, “life birds” for most of my group, beautiful weather for the tour, and lots of good food and conversation made for a heckuva weekend. And perhaps best of all, I had three kids under 15 on my tour! Besides a rare occurrence for a birding tour, their enthusiasm was contagious, and it gave us hope for the future of birds and birding! 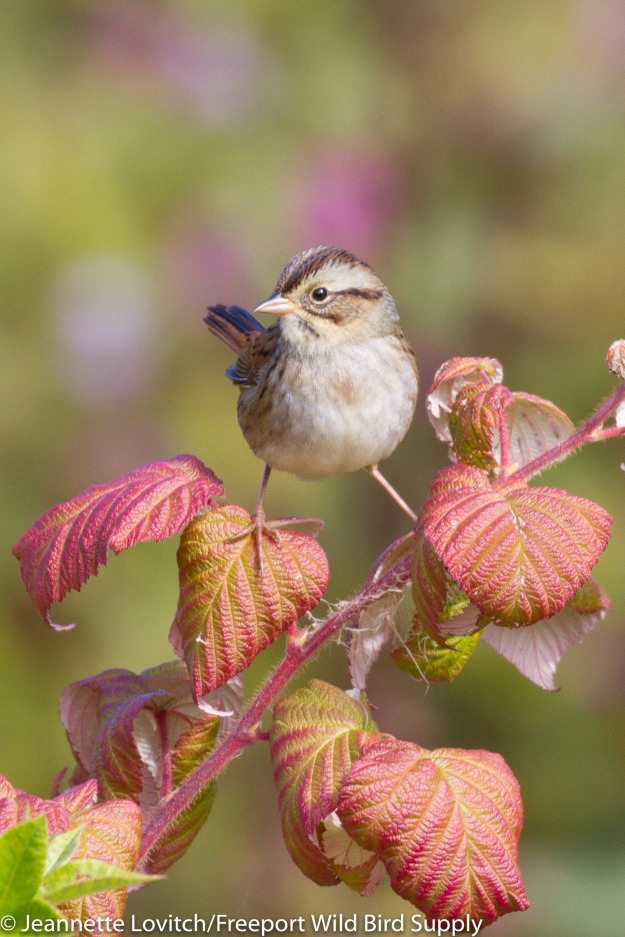 (Rarities seen by others by not the group as a whole: Yellow-crowned Night-Heron, Red-headed Woodpecker, and Yellow-breasted Chat).