END_OF_DOCUMENT_TOKEN_TO_BE_REPLACED

I think it is safe to say that the inaugural “Coastal Quick Hit” van tour was a resounding success! We not only found all of the target species that we were after, but also a few surprises, and we saw all of our target species incredibly well! And we really lucked out with the weather, as the only rain we encountered was a brief downpour while we were driving. I have “no” doubt that all future tours will be this successful.

We receive numerous requests for guiding for several local breeding species that can be hard, if not impossible, to see elsewhere. While Bicknell’s Thrush is my number one request, there are a number of coastal species that are also sought. Folks travel from far and wide for our annual “Bicknell’s Thrushes of the White Mountains” van trip, and often I get requests for private guiding for many of the other species before and after that tour. Therefore, for efficiency and economy, we introduced the “Coastal Quick Hit” tour.

We had four visitors from California on board who were here to take part in the weekend’s thrush tour, plus three local birders out for the day. The eight of us met here at the store on Friday morning, and worked our way south.

Beginning in Scarborough Marsh, we had the opportunity to study Saltmarsh and Nelson’s Sparrows side-by-side, and ponder over some hybrids as well. We compared their songs and subtleties of identification – and learned how to simply leave many, likely hybrids and intergrades, as unidentified. Meanwhile, “Eastern” Willets and many other marsh denizens were numerous, and several sparrows and Willets posed for photos. 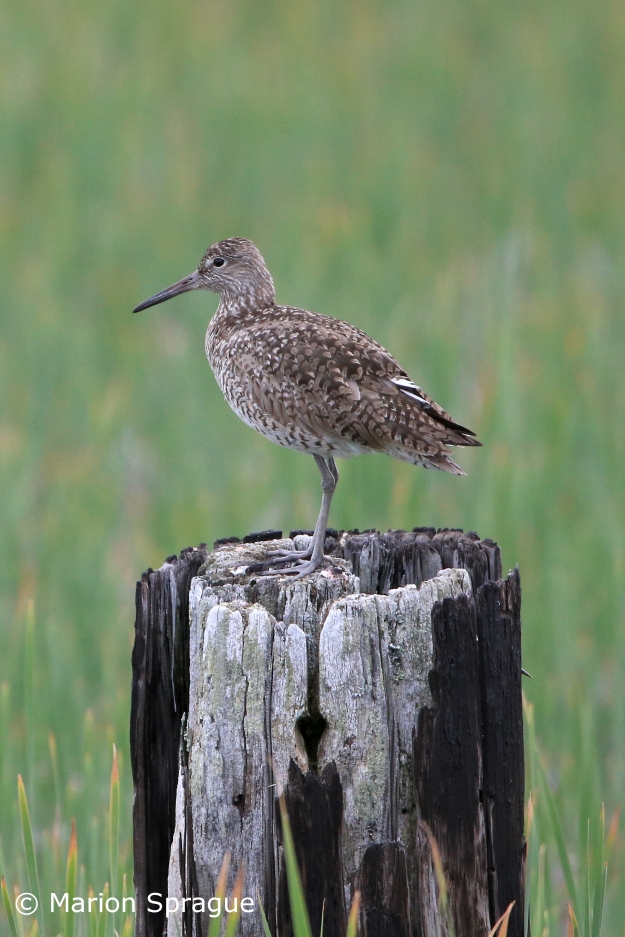 Walking the Eastern Road Trail, a Fish Crow was unexpected, and we enjoyed Little Blue Herons, Great and Snowy Egrets, and more. We then found this wading bird, which immediately brought to mind one of the ultra-rare Tricolored Heron x Snowy Egret (and now, possible a backcross there of) that calls Scarborough Marsh home. 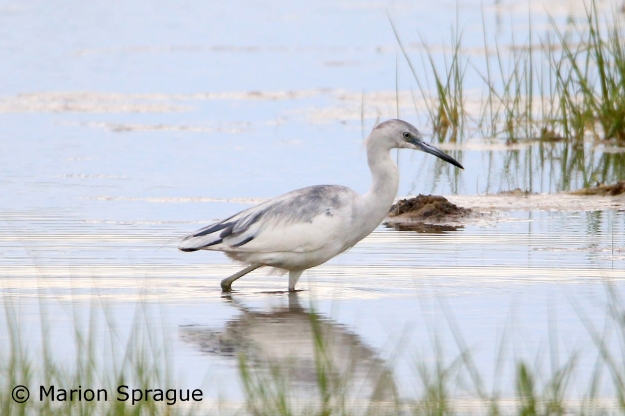 However, it soon became clear that this was a “pure” Little Blue Heron – nothing about its shape, size, structure, or behavior (a regular adult was nearby, and sometimes in the same field of view) was suggestive of anything else (or partly anything else), and so I hypothesized about a leucistic Little Blue Heron. Immature (1st through 2nd summer) little blues are piebald, but this was much, much paler than what I usually see, with more of a uniform “wash” of the purple-blue on the body and wings. What threw me off a bit were the essentially fully-developed head and back plumes (the “aigrettes”) that I did not think were present on a bird who’s plumage was this early in development. A little research showed those plumes were just fine for a 1st-summer bird, even one in which so little adult-like plumage had been obtained. Therefore, unless this bird looks exactly the same come fall, I think it’s just a paler-than-average 1st summer Little Blue Heron. Nevertheless, it was a fun bird to study and ponder – offering a lesson in comparing shape, structure, and behavior in two birds that didn’t look the same.

Also off Eastern Road, we noted Glossy Ibis, American Black Ducks, and a White-rumped Sandpiper in spiffy breeding plumage – a treat for folks from the West Coast, and not a bird we see many of in spring here in the Northeast. It was hanging out with 4 tardy Semipalmated Sandpipers.

A drake Gadwall at the Pelreco marsh was a nice sight as well.

Four unseasonable Brant greeted us at Pine Point, where we soon spotted one of our most sought-after species, Roseate Tern. At least 8, and likely many times that, as birds were coming and going, were quickly picked out from the crowds of Common Terns, with plenty of Least Terns zipping around. 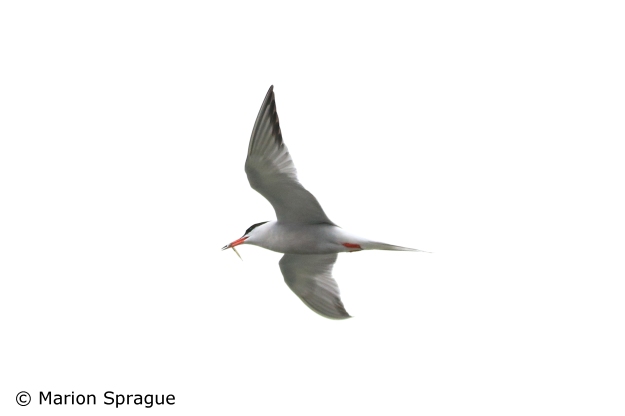 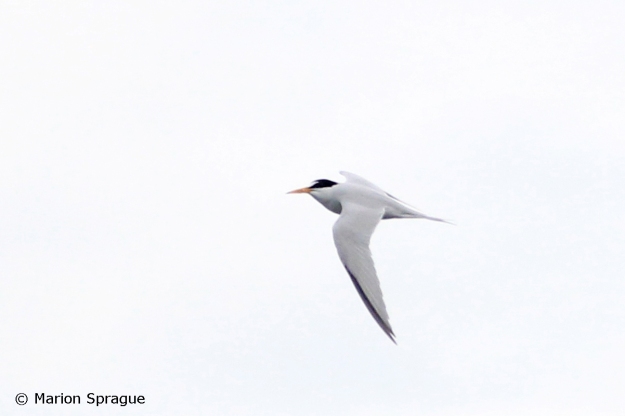 This tour was designed to have at least two chances at all of our target species, but we “cleaned up” in Scarborough, so we elected to brake up our upcoming drive with a stop in Webhannet Marsh near Moody Point for a visit with the King Rail that, for the second summer in a row, has occupied a small corner of the marsh. While waiting for it, we spotted more Willets, and had another great view of a Saltmarsh Sparrow or too.

The rail never called, but about 2/3rds of the group, myself NOT included, were able to spot the rail as it crossed two successive small openings in the marsh grass. The rest of us were just a little too far up the road, and it never made it to the third clearing we were stationed at. But still, a King Rail in the middle of the afternoon! A loafing Surf Scoter with Common Eiders offshore was also unexpected.

A delicious lunch fueled the rest of our drive south and the timing of the rainfall could not have been better. Traffic was relatively minimal as we fought our way through the outskirts of Boston, arriving at Revere Beach just as a thunderstorm passed to our south.

…it was incredibly rewarding, as in short order, we picked up our last two target species, Piping Plover… 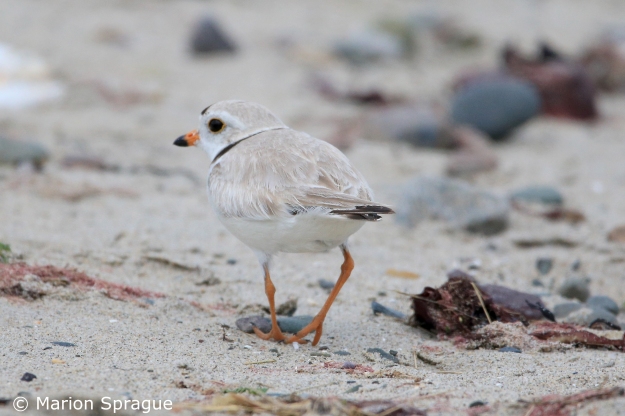 …and, believe it or not, Manx Shearwater… 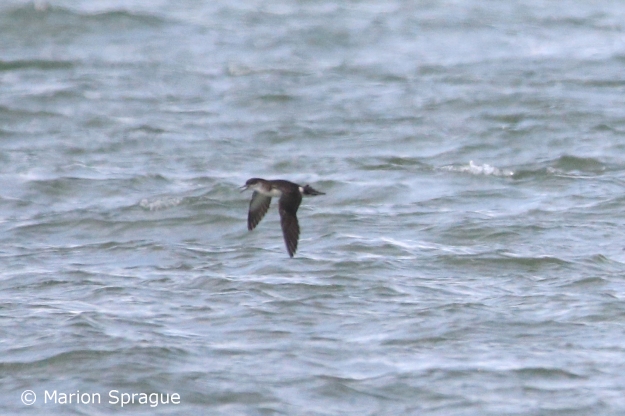 …from land, in a city, and not very far offshore!

This incredible phenomena (they are clearly nesting locally, but where!? One of the Boston Harbor Islands?) was the icing on the cake to a most-successful trip. Based on these results, you can expect to see the “Coastal Quick Hit” van tour again in 2018 and beyond. Stay tuned to the Tours, Events, and Workshops Page of www.freeportwildbirdsupply.com for more information about this and all of our tours.

Yesterday, I had the pleasure of leading our annual “York County Rarity Roundup” Field Trip for York County Audubon today. With no rarities to “round up,” we set out to find our own, birding from Kittery through Wells.  We followed a very similar route to what Jeannette and I always do on our monthly south-coastal run.  The difference today was that with a group, and with so many birds at FortFoster, we never made it out of Kittery by lunchtime.  Too bad that meant we just HAD to have lunch at Loco Coco’s Taco (mmm, chili relleno burrito…)!

It was a very birdy day overall, even in the windy afternoon.  A preliminary total of 63 species of birds included 9 species of sparrows, 5 species of shorebirds, and 4 species of warblers.  Excellent-for-the-season bird diversity was augmented by 5 species of butterflies, 3 species of mammals, 2+ species of dragonfly, 1 reptile (Garter Snake), and 1 amphibian (Spring Peeper).

The bird of the day by far was “Audubon’s” Yellow-rumped Warbler that I found at FortFoster.  This western subspecies of Yellow-rump (it once was, and I believe will likely once again be considered a full species) has only occurred – or should I say, been detected – in Maine a few times.  I can only think of one recent record, an adult that nearly-overwintered at Dyer Point in Cape Elizabeth a few years ago.

If anyone wants to look for it, the bird was flycatching and occasionally eating Red Cedar berries along the west edge of the park. Follow the entrance road into the park, until the large gravel parking lot opens up on the left. The bird was loyal to the right (west) edge here, especially around the big cedars in the mowed lawn.

Noah Gibb and I photographed the bird extensively, and I was also able to borrow a phone to get a voice recording.  All aspects of the bird – from plumage to voice – fit perfectly with a pure “Audubon’s” Warbler.

I first glimpsed the bird sallying for insects in and out of shadows.  The overall extremely cool gray plumage tone – top to bottom – brought to mind a first fall female Pine Warbler. But something wasn’t right.  The bird began to call, and that was definitely not the call of a Pine Warbler…but what was it?  We saw the bird briefly a few times, the pieces began to come together, and then as it flew to another tree the bright yellow rump became evident.  “Audubon’s Warbler!!!!” I exclaimed. 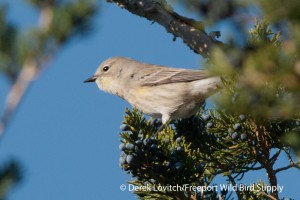 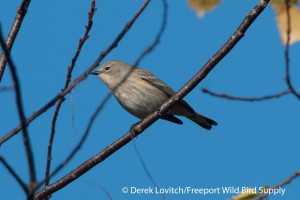 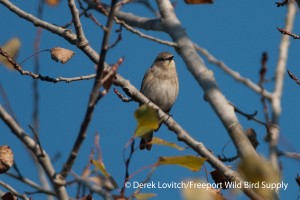 We studied the bird extensively for at least a half hour, occasionally in perfect light for prolonged periods.  I scribbled notes, and encouraged others to do the same before we discussed the bird any further.  Plenty of “Myrtle” Warblers (the Eastern subspecies of Yellow-rumped) were nearby for convenient comparison.

– Obvious “Yellow-rumped” Warbler with bright yellow rump, overall size and shape, bill size and shape, etc.
– Exceptionally cool gray overall plumage tone, not suggesting the brownish tones of even the palest Myrtles.
– Very diffuse streaking below.
– Very restricted and pale yellow “blobs” on sides of chest.
– Very subtle and restricted yellow on throat, not visible in all light conditions, but quite obvious in good sunlight.
– Lacked the extension of pale on the throat that “points” up around the back of the auriculars as on Myrtle.  Therefore, throat patch appeared rounded, or encircled by the cool gray of head.
– Auriculars only marginally darker than rest of head, often looking concolorous.
– Call note very different from surrounding Myrtles, much sharper and not as “blunt.”
– Exceptionally dull plumage highly suggestive of a first fall female, but the lack of a definite molt limit within the greater coverts prevents us from clinching the age. (reference: The Warbler Guide, Stephenson and Whittle, 2013)

Good bird!  And yes, Rarity Season is most definitely in full swing!  Good thing it appears that, after a prolonged drought, I have finally refound my rarity-finding mojo.  Phew.

Now, about that Saltmarsh Sparrow – which I admittedly called an “Interior” Nelson’s Sparrow in the field…  Expecting to see an “Interior” Nelson’s Sparrow based on the timing, micro-habitat, and behavior, I reached for my camera before I fully studied the bird. After firing off some photos, and making sure everyone got on the bird, it took off and we never saw it again. Although I mentioned that the malar looked “quite dark,” I didn’t second-guess the call until I looked at photos on the computer this afternoon.  Yeah, it’s a Saltie.  The malar is not only dark and distinct, but it frames a clear white throat.  The breast streaking is dark and extensive, the bill has a fleshy-pink cast, and it is simply too long-billed for an “Interior” (subspecies alterus or nelsoni; I don’t believe they are identifiable in the field).  As a final clincher, note the fine streaks towards the rear half of the supercilium.  Behavior and timing wise: odd for a Saltmarsh.  Plumage: essentially textbook for a Saltmarsh.  Therefore, “After further review, the call (in) the field is overturned.” 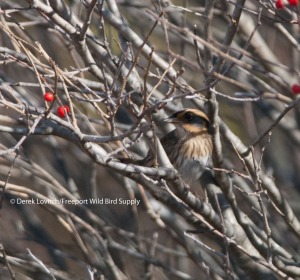