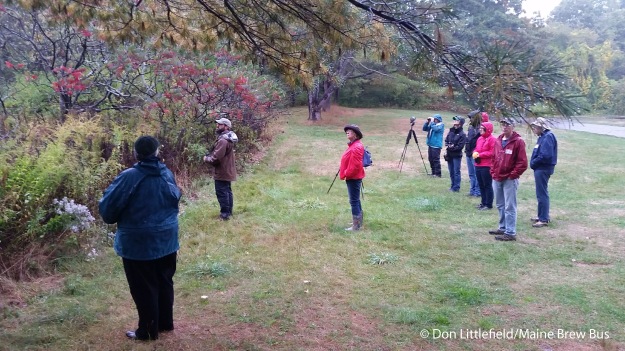 The forecast called for light showers ending in the early morning, and the sun coming out. With rain developing overnight with the passage of a cold front, dreams of a fallout danced in our head as we headed south on the Maine Turnpike on Sunday for our latest installment of the “Birds on Tap (sm)– Roadtrip!” series.

Fort Foster in Kittery was our destination, and there are few other places I’d rather be in Maine if a fallout was going to occur. But had the winds shifted early enough? Did birds take to the air before the rain arrived? Would the rain stop in time for sun to shine on the hottest corners of the park?

With anticipation – and quite a bit of apprehension because most of us were dressed for a few brief light showers – we stepped off the bus at the entrance to Fort Foster in a light, but steady rain. I was watching a plume of moisture offshore; moisture that was being sucked up from Hurricane Matthew.  It was supposed to remain offshore.

It kept raining. And then it rained some more. We got soaked to the bone, and suffice to say, there was no fallout. (And for the record, the “showers ending in the early morning” continued to fall, moderate at times, through about 11pm that night!).

But luckily it was fairly warm, we were mostly in shelter from the wind, and we found a few good pockets of birds.  Our first bird of the day was a low and close Blackpoll Warbler along the entrance road, which stoked the fallout hopes briefly. But other than a couple of pockets of White-throated Sparrows, the woods were rather slow.

We spent some time with plant ecology, and talked about the importance of the shrub-scrub habitat in the park. We played in the wrack line on the beach to observe Springtails and Seaweed Flies.  A large male Gray Seal on offshore rocks dwarfed the Harbor Seals around it.  A Great Cormorant posed for us to compare it to the plethora of Double-crested Cormorants nearby, and Common Eiders and a couple of Common Loons, joined by 8 newly-arrived Surf Scoters, plied the waters.

A couple of cooperative Least Sandpipers were on the beach, while a single mixed-species foraging flock that contained a truant Wilson’s Warbler, a Blue-headed Vireo, and a couple of Yellow-rumped Warblers amongst a band of Black-capped Chickadees hinted at the migrant potential of the place, as did a low and close late American Redstart a little earlier.

These were all new locations for everyone on the tour, so the value of exploring new areas (to return to on a sunny day!) was recognized, even if the birding was on the lackluster side of things. As was the weather.

So with our rather damp birding time coming to a close, Don Littlefield took over and delivered us to Kittery’s Tributary Brewing Company.

After working at several breweries throughout his career, New England brewing legend Tod Mott – the creator of the Harpoon IPA that is often credited with beginning the American IPA revolution – and his wife, Galen, opened their own brewery in September of 2014. With a focus on “traditional, well-balanced, full-bodied beers” and locally-sourced ingredients, Tributary has rapidly become a favorite tasting room destination for many aficionados.

And it just happened to be down the road from Fort Foster – which, when it’s not pouring rain – is one of Maine’s premier birding destinations and therefore was a natural fit for a Birds on Tap (sm) – Roadtrip! destination.  One half of the Ian and Ian tag-team duo of brewers, Ian Goering, came into work early to open the doors to welcome us out of the elements.

We began our tasting with an American Mild brewed with an experimental hops that offered an essence of strawberry. Downplaying malts in order to showcase the hops, it was a little bitter by design, with a less sweet finish.

Next up was the Oktoberfest – which turned out to be the favorite beer of the day for many –a fuller bodied lager, heavier in malts, yet with a crisp finish. 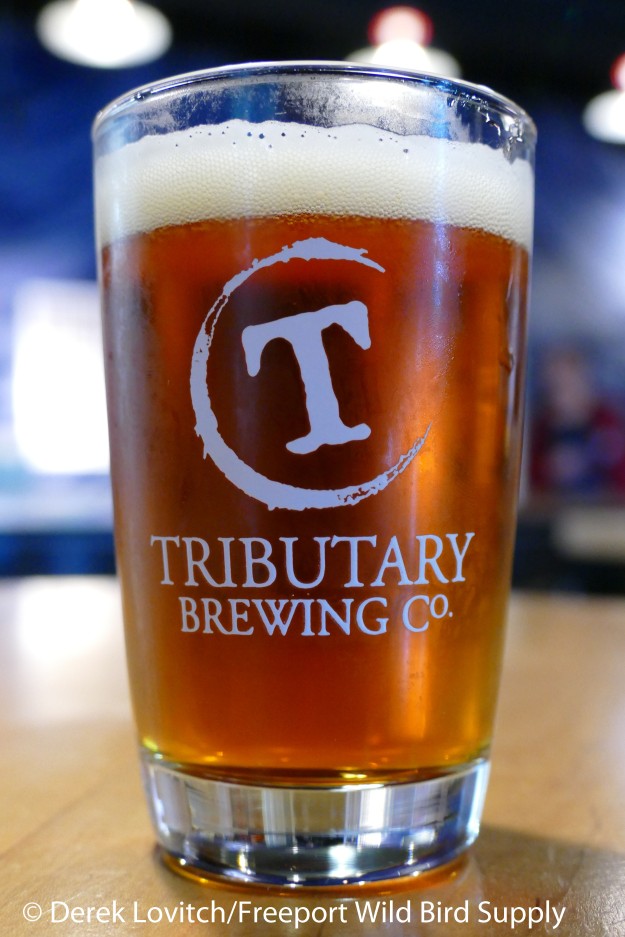 As we sipped it, Ian gave us a tour of their ultra-clean and efficient brew house.

Next up was their Blueberry Ale which – unlike many blueberry beers that add artificial flavors or blueberry syrup – added real blueberries into the kettle to allow the sugars of the fruit to be fermented by the brewing yeasts. The result was a decidedly un-sweet pale ale that had just the essence of blueberries.

Last but not least, we enjoyed a taste of their smoky and very chocolate-y – while still being nice and hoppy – Black IPA.

New fans of Tributary. Well, and/or just cold and needing another layer?

We were able to dry out further as Don filled us in on some of Maine’s brewing facts and history as we headed up the road to Hidden Cove Brewing Company in Wells.

Formerly a restaurant with a small house brewery, the building has been creatively re-purposed into a growing brewing operation.  A “tale of two breweries,” as Don put it, with “traditional offerings alongside more creative barrel-aged” options, Hidden Cove offers a wide array of options in their tasting room. 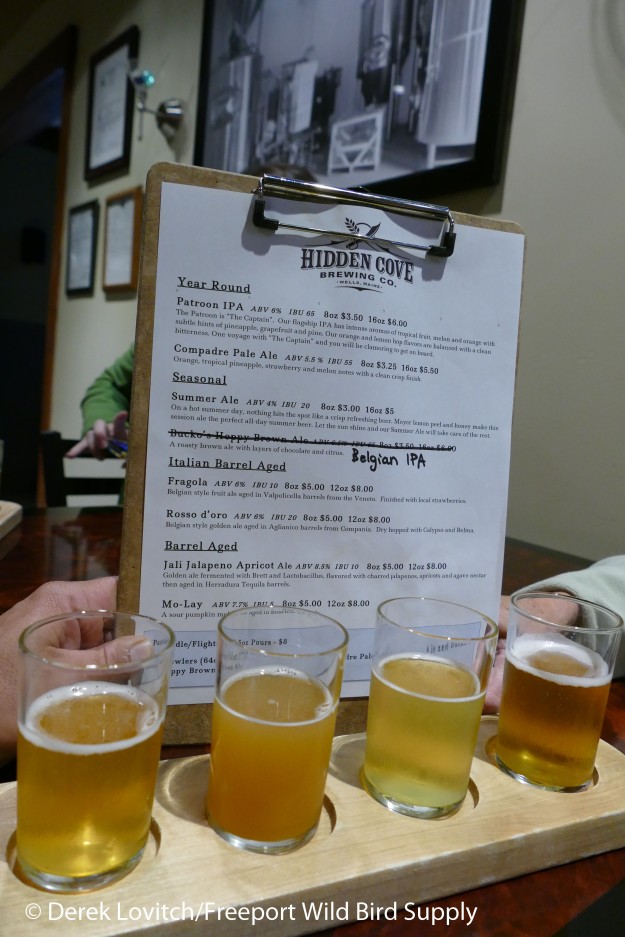 Today, we sampled five diverse offerings, beginning with their Patroon IPA – their best selling, flagship beer which was rich in juicy hops.

Next up was the Compadre Pale Ale, “the sidekick to the flagship IPA and is a classic West Coast IPA that utilizes a single hop, Belma.”  The tropical fruit flavors really came through for me, with a very crisp and clean finish.

Rich with the flavor of Meyer Lemon peel, the refreshing Summer Ale brought us back to warmer days. Bitter (remember, that is not always meant as a negative when tasting beer!) and yet quite bready from the yeast, the hop-forward Belgian IPA was the last planned sample.

However, Don wanted to show off the creative brews that are coming out of their aging barrels, so we were treated to a sample of the very complex Mo-Lay, a sour pumpkin with chili, chocolate (mole), and finished in bourbon barrels with Brettanomyces and Lactobacillus. Like a lot of complicated beers, some people loved it, some didn’t, but everyone enjoyed the opportunity to see what people are doing with beer these days.

Afterall, part of the goal of the Birds on Tap (sm) – Roadtrip! series is to introduce folks to new breweries and new birding sites, new beers and new birds, and broaden horizons and open eyes wider to each!

Speaking of, our next Birds on Tap – Roadtrip! tour is coming up. On November 13th, join us for our second annual “Fall Ducks and Draughts” when we venture north to the waterfowl hotspot of Sabattus Pond, followed by stops at Baxter Brewing and Maine Beer Company!