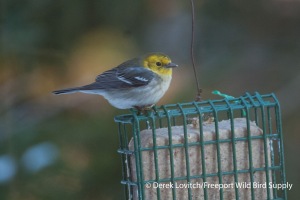 A warbler arrived at a Cundy’s Harbor, Harpswell feeding station on November 18th.  Any non-Yellow-rumped Warbler is exciting in Maine by the end of November, but most turn out to be Pine Warblers – a rare but regular “half-hardy” that often winters outside of its usual winter range, and often takes advantage of feeders to do so.  This particular bird was identified as a Black-throated Green Warbler – an outstanding late-November record but not one without precedence.  Intriguingly, on the first day, it appeared with a second warbler that may have been a Black-throated Blue Warbler, but that bird was not seen again.  However, on December 11th, the homeowner brought in an iPhone snapshot of their visitor to the store to confirm the identification.  Distant and blurry through a window, the bright yellow face and black beady eye immediately stood out. “Um, can I come over?” I inquired.

I arrived at 6:55 the next morning, as the bird was regularly being seen just after 7.  And sure enough, it showed up at 7:02!  It remained for just a few minutes, eating hulled sunflower seeds at the feeders with a small band of Black-capped Chickadees. And as I surmised, this was definitely a Hermit Warbler – only the second-ever to be seen in Maine!

The light was low, and the feeders were still in the long, early-morning shadows, so my photos were pretty poor.  I asked to stay a little longer, and after a brief visit at 7:35, the bird returned and fed extensively between 7:55 and 8:03, in which time I was able to photograph the bird extensively. 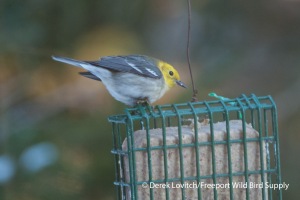 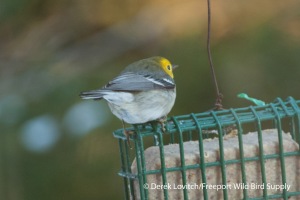 The bright yellow face was readily apparent, which sets off the seemingly-large dark, beady eye.  There’s a very limited amount of dusky green on the auriculars, and the greenish crown tapers to a “widow’s peak” on the forehead.  The back is greenish-gray and the gray wings are set off by two bold whitish wingbars and pale-fringed secondaries.  The throat was almost wholly yellow, except for a small white chin and a couple of dusky smudges.

I aged this bird as an immature female due to the overall relatively drab colors and lack of black almost anywhere in the plumage.  However, I was not familiar with this plumage in the field, and some photos online and in some books concerned me a bit, so I sent a couple of the photos to a friend in California for confirmation.  He forwarded them to Kimball Garrett, the Ornithological Collections Manager for the Natural History Museum of Los Angeles County, and the co-author of Warblers in the Peterson field guide series.

His response was straightforward, it was an immature female, born this past summer: “I certainly wouldn’t have called it anything other than a female Hermit Warbler.  The yellow across the uppermost throat is fine for female Hermits (shown to various degrees in all 3 of our skins of HY [hatch year] females).  I would worry about prominent streaks on the flanks and undertail coverts, but I really see almost nothing there (and what there is could be explained by darker feather shafts that sometimes lend the impression of streaks).”

This is truly a remarkable record.  The first state record, found by Scott Surner on MonheganIsland between September 29th and October 1st was seen by only a handful of birders – not including yours truly despite my presence on the island at the time, and eventually much effort, but that’s a long story for another day.  Breeding in the mountains of the Pacific Coast from the Olympic Peninsula of Washington south through the Sierra Nevada range to about south-central California, Hermit Warblers normally winter in southwestern Mexico through the mountains of Central America down to Nicaragua.

Therefore, for this bird to arrive in Maine it likely had to fly 90-degrees in the wrong direction.  While “180-degree misorientation” in which birds fly north when they “should” be flying south (for example) is a fairly well-established pattern that results in far-flung vagrancy, 90-degree misorientaton appears to be even rarer.  In other words, this bird was not “blown here,” (although it could certainly have been facilitated in its arrival by a strong storm or persistent westerly winds) but was somehow “miswired” to fly in a very wrong direction.  Although it is fun to ponder (at least for me!), how and why vagrants arrive in certain places, we obviously can’t know for sure what mechanism(s) delivered this bird to a feeder along the shore in Harpswell, Maine.

As I enjoyed this bird, and a wealth of other activity at the feeders, the homeowners and I discussed the significance of this sighting.  Of course, I broached the topic of “visitation,” as many birders would love the opportunity to see this bird as well.  I was exceptionally grateful for the chance to see this fantastic bird, and I knew other birders would be grateful as well.

Sometimes, rare birds at feeders are “easy” to share, such as when they are at a feeder visible from a road with ample parking nearby.  For a variety of reasons, some birds simply cannot be made public.  After much discussion, it was decided that this bird would not be publicized.  A small, private dead-end dirt road with virtually no parking, close neighbors, and no visibility from the road made this a challenge.  Simply put, you had to be in the kitchen…and with life schedules and all of the above considerations, it was, unfortunately, in the best interest of the homeowners to keep this bird under wraps even though everyone regretted this conclusion.

The bird was seen regularly through the 13th of December, but after the homeowners were out of town for the weekend, they came back on the 16th and have not seen the bird again.  A heated birdbath and live mealworms were deployed upon their return, but the bird is nowhere to be found.  Seeing that it has now moved on, I post this blog to document this “Mega” rarity for the permanent record, as per my agreement with the lucky homeowners who were graced by this special visitor from the “other” coast.