A whirlwind Christmas trip to my homeland of New Jersey was filled with fun and festivities with friends and family.  Birding time was limited in this visit, but Jeannette and I simply had to spend at least one day birding in the “deep south.”

Arriving on Christmas morning, we took Sasha for a stroll around my Mom’s neighborhood, enjoying Carolina Chickadees and goodly numbers of things like Carolina Wrens and Red-bellied Woodpeckers.  A similar suite of species greeted us the next morning at nearby Turkey Swamp Park.  In the afternoon, a big vulture roost a couple of blocks away from a friend’s house gave us the chance to enjoy Black Vultures, along with bunches of Turkey Vultures.

Friday the 27th was our big birding day however, and we elected for the “North Shore Tour,” one of my favorite NJ winter birding tours.  Covering ponds, inlets, and ocean from Point Pleasant Beach north through Monmouth Beach, we tallied a respectable 22 species of waterfowl, and found a few goodies.

Many of the ponds remain open in the winter nowadays, and concentrate nice numbers of waterfowl.  Since they are surrounded by development and activity, the birds are often fairly confiding and approachable, affording great opportunities for photographs, such as this shoveling Northern Shoveler…

…and these Ruddy Ducks…

…and other waterbirds such as this Great Blue Heron.

The goal of this tour is for 25 species of waterfowl.  (A very long day that begins at Barnegat Lighthouse and ends at Sandy Hook has the potential for 30 species of waterfowl).  I later learned that siltation – augmented by flooding from Hurricane Sandy – has limited the number of diving ducks, and less emergent non-phragmite vegetation has limited lingering dabbling ducks.  Twenty-five seems like a lofty goal, but we were off to a good start.  Two American Wigeons in Lake Louise – our only wigeons of the day – were our tenth species, after only four stops.

Arriving at the Manasquan Jetty at the north end of Point PleasantBeach, we began to add seaducks to the list, but then I spotted a Pacific Loon!  A rarity and “review-list” bird in New Jersey (like most of the East), we set off to document it.  It soon disappeared behind the jetty to the north, and we raced around the inlet to look for it from ManasquanBeach.  It took a while, but we finally found it, and I set about attempting to phone-scope it – a distinct challenge on a distant, actively-feeding loon.  Then we lost it.

A text-blast resulted in a birder being on the seen in a matter of minutes, soon followed by our good friend Scott who joined us for most of the rest of the afternoon.  The bird finally reappeared, and I did manage a series of “documentation” shots.  This was the “best” of the lot:

Purple Sandpipers, Dunlin, and Sanderlings were on the jetties, and a 1st-winter Iceland Gull was at Fisherman’s Cove.  We had stalled at 15 species of waterfowl however (including many hundreds of Brant in the ManasaquanRiver), but we had more important things on the agenda – like lunch, and our first “slices” of the trip.  Even average pizza in NJ is better than 98% of the cardboard and ketchup served in Maine, so this was definitely a priority.

Refueled, we returned to the coast, and worked our way north with Scott.  An adult Lesser Black-backed Gull at SylvanLake and 8 Snow Buntings at the mouth of the SharkRiver were other highlights, but waterfowl were the stars of the show, such as these Hooded Mergansers.

Scanning the ocean again from the end of Roosevelt Avenue in Deal, Scott spotted ANOTHER Pacific Loon – 2 ½ hours after the first bird (although only 10-15 miles or so apart) we believed this to be a bona fide second bird, which is exceptional in NJ.  I’ve certainly never seen two PALO in the same day in the state.  This time, the bird was much closer, so Jeannette took over the documentation.

Including this nice comparison shot with a Red-throated Loon.

A pair of Wood Ducks on Lake Tackanassee put us at 21 species of waterfowl on the day, with the hopes for one more up the road. Scott had to depart, but gave us instructions on how to look for a massive aggregation of scoters that had been building off of MonmouthBeach.

Although this section of the coast was not as badly devastated by Hurricane Sandy, plenty of evidence of her destruction was readily apparent.

We saw plenty of Black Scoters from various locales, but the big group of 3-4000 birds alone (80-90% Black, a few White-wings, and the rest Surf) were across the street from the Monmouth Beach Cultural Center.  The sun was getting low, and many of the birds were quite distant in the outgoing tide, but we still managed to tease our two immature male King Eiders – our 22nd and final waterbirds species of this most productive and enjoyable day of birding the JerseyShore.

Saturday was the Pinstripe Bowl at Yankee Stadium, so Jeannette and I joined a bunch of friends for a train ride to and from the game.  An unseasonably warm and beautifully sunny day made for a very enjoyable bowl experience, at least until the last seven minutes of the game when Notre Dame pulled away from my beloved Rutgers.  During TV timeouts, Jeannette and I kept an eye open overhead, yielded a stadium list of 7 species: Ring-billed and Herring Gulls, Turkey Vulture, Red-tailed Hawk, European Starling, Rock Pigeon, and House Sparrow. No bird lists were kept for the pre- and post-game bars.

We had plans to bird in Connecticut with a friend on our way home on Sunday, but with the next storm rapidly approaching, we hit the road early and somehow stayed just ahead of the storm – nothing more than light rain or sprinkles from southern Connecticut all of the way to Freeport. Although light rain caught up with us as we had lunch in Meriden, CT, it was worth it as we visited the famous Ted’s for the local specialty, steamed cheeseburgers. 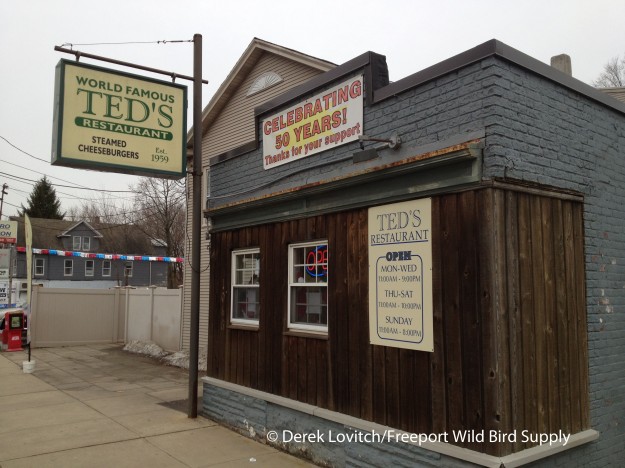 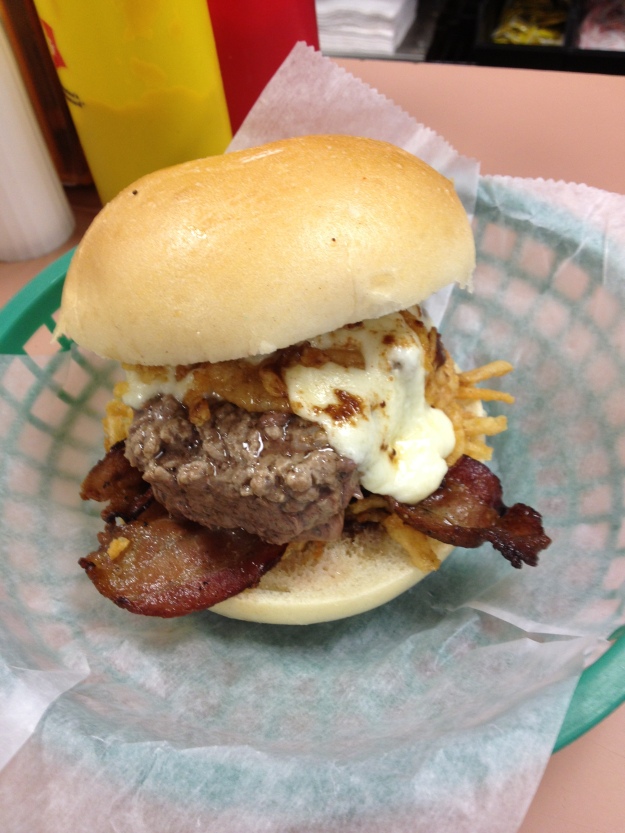 We also tallied raptors on our drive home, including a goodly count of 47 Red-tailed Hawks.  Three Turkey Vultures (NJ), 1 American Kestrel (NJ), and 1 Cooper’s Hawk (NY) were added to the road list.

Rain began to fall in earnest soon after we returned, and a couple of hours later snow began to fall heavily. Another 6 ¼ inches accumulated by morning as Sasha and I broke trail at The Hog.  Yup, we’re back in the north…and quite happy about it.  It was a great trip, but it’s always good to be home.