“I don’t always chase birds, but when I do…”

…And I almost never chase birds away from Maine, and I rarely even chase birds more than an hour away from home.  Therefore, it was exceedingly out of character for me to even consider chasing the Fork-tailed Flycatcher that has been present in Lyme, Connecticut.

A vagrant from South America, most Fork-tailed Flycatchers that show up in late spring or fall are notorious “one day wonders:” found one day, and gone the next.  That is why I have missed several, including a handful in Maine.  In fact, one showed up 15 minutes away in Brunswick the day we left for Russia two years ago.  Figures.  I even chased one with friends on Stratton Island that involved a boat charter, a borrowed dingy, a rope, and a signpost as a paddle.  We missed that one by about an hour.

In other words, this bird was a bona-fide nemesis, so one hanging out for 9 days as of Sunday was tempting my self-restraint.  Then, as my friend Phil and I and were planning a birding day, we decided to go for it.  Why not?  We didn’t have a better idea, it would be a fun drive of listening to music and conversing, and we’d have the Patriots game to pass the time on the trek back.  So off we went.

The drive seemed like it took forever!  We were anxious – seeing reports that the bird had been seen first thing that morning only made us more excited – and it was a long, often-boring drive.  Once the sun got high enough, we counted roadside Red-tailed Hawks to pass the time (17 starting at the 95/495 junction in Massachusetts).

We arrived at the Hadlyme Ferry slip parking lot at 10:40am, with about a half-dozen other birders still present.  We were informed that it was seen as of about 25 minutes ago. 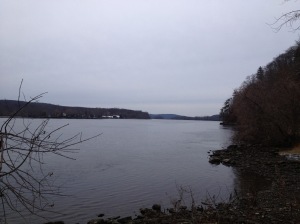 Although it usually only disappears for about 20-30 minutes at a time (to feed behind a nearby inaccessible hillside), it wasn’t until 11:20 that it reappeared – an agonizing, and bone-chilling (30F, light northwest wind off the river) forty minutes!  The bird was well seen by all going about its business through 11:35.

The flycatcher was surprisingly inconspicuous as it fed on Pokeweed berries on the hillside. 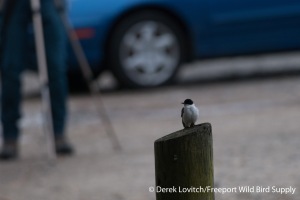 It was far more obvious when it came out to attempt to flycatcher (we did see it go after a couple of small bugs, despite the cold temperatures).

But Phil and I were not yet satisfied – we didn’t come all this way for 15 minutes – so we waited for its return.  This time, the wait was merely 15 minutes, and we then had a most-satisfactory and fulfilling time with the bird for about 40 minutes.  Quality time with a stunning lifer!  And more time for photographs and studying.  The birds’ behavior – so far out of place at such an amazing season certainly piqued my interest to see what it was eating to survive. 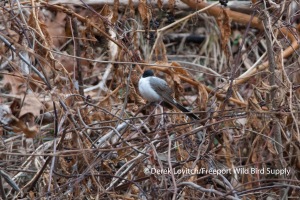 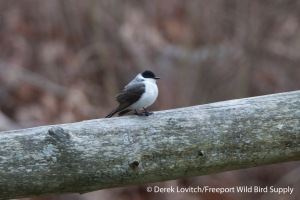 It was already lunchtime, and Phil and I were definitely getting hungry.  Furthermore, I did want to get over to Hammonasset Beach State Park for some fruitful birding to work on my Connecticut state list – a list lacking quite a few common birds, especially winter waterbirds. But it was hard to leave a bird as sexy as a Fork-tailed Flycatcher!  “Let’s walk away from this Fork-tailed Flycatcher so I can look for Common Goldeneyes” said no one, ever.

The ferry slip area was quite birdy, with a little flock of Dark-eyed Juncos and White-throated Sparrows that also included a Hermit Thrush.  A flock of 8 Common Mergansers were heading south down the river, while a migrant Northern Harrier passed overhead just as we were leaving.  But I wanted more than one state bird on the trip, so after spending way too much time trying to find a place to eat: “closed at 1” does not mean “breakfast all day!” were among the examples of our lunch attempts being foiled.

We needed to start to make some progress eastward, and daylight is limited this time of year, so we skipped Hammonasset, and looked for lunch on a way to a park that looked promising on a map that was more or less on our way home.  We finally had lunch – despite rather slow service that resulted in our birding time rapidly ticking away – and then rolled into Bluff Point State Park in Groton.  There were two impounded back-bays, next to an airport, just a mile or two from the coast.  On a map, that looked like a perfect spot to find some ducks…and Snowy Owls.

Unfortunately, we soon learned that we had to walk to the coast, and we didn’t have time to do that.  A scan of the airstrip didn’t yield any owls, but the water – that looked good on the map – was nearly devoid of waterbirds!  8 Mute Swans, 7 Red-breasted Mergansers, and 2 American Black Ducks were it – and none of those were state birds.

I was disappointed, but really, I saw a Fork-tailed Flycatcher!   The disappointment of only seeing one state bird on the day did not last long…and was completely forgotten as Phil and I cheered on the Patriots during their remarkable and exciting comeback that certainly helped make the drive home feel a lot shorter.  As did -of course – the fact that we were successful in our twitch of one of the more charismatic vagrants that shows up in North America.  I’d call the day a success, to say the least!

5 thoughts on “Fork-tailed Flycatcher in Connecticut!”