Sabattus Pond was frozen on Monday morning, as I expected, thanks to this recent bout of unseasonably cold weather.  While 35 Mallards, 3 Hooded Mergansers, 2 American Black Ducks, and 1 Mallard x black duck hybrid were present in the outlet stream, this likely brings my Sabattus birding season to a close.

But it is just after Sabattus’s freeze-up that LakeAuburn is its most productive.  Today, 117 Canada Geese, 58 Greater Scaup, 46 Lesser Scaup, 41 Ruddy Ducks, 22 Common Goldeneyes, 8 Hooded Mergansers, 1 Bufflehead, and 1 continuing hen Black Scoter were tallied in a less-than-exhaustive search of the large lake.  The Black Scoter is a great bird inland, and she’s been present for at least five weeks now.  Meanwhile, among the Canada Geese, there was this funky mutt – apparently a hybrid with some sort of domestic thing.

Between visiting the two lakes, I scoured Upper Street in Turner for Snowy Owls (none) or other raptors (just one Red-tailed Hawk), but I did happen upon a small flock of 35 Horned Larks that contained two Lapland Longspurs.  They were feeding at the edge of Pearl Road, taking advantage of where the plow had scraped the sides of ice and snow.  I got this lucky shot of one of the Lapland Longspurs in flight with the Horned Larks.  Unfortunately, the light mist and heavy cloud cover prevented a really great shot. 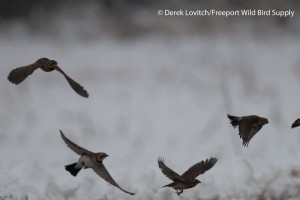 But back to waterfowl…

Sabattus Pond is one of my favorite birding locations from mid-October through freeze-up.  The diversity of ducks is rarely matched in this part of Maine, and the proximity and ability to study birds (such as Lesser vs. Greater Scaup) is unsurpassed.  Each fall I tell myself I needed to visit Sabattus more often, so this fall I committed to visiting once a week, beginning on 10/30 – I would have started a little earlier in the month, but the weather at the time had been so warm that waterfowl were not yet arriving en masse prior to the end of the month.

I tallied all waterbirds (except for Herring and Ring-billed gulls) on each visit.  I was curious to document the ebbs and flows of respective species throughout a full season here.  I also hoped to find some rarities of course.

Other highlights at Sabattus included a Peregrine Falcon and 40 Snow Buntings on 11/7 and 3 White-rumped and 3 Pectoral sandpipers on 11/14 (both late and noteworthy inland).

Overall, it was probably only an average season at Sabattus.  The only week I missed was last week, due to my schedule and Thanksgiving, which is unfortunate, as the pre-ice-up week would have provided some interesting data.  There were no fallouts, and only a few unexpected (or at least, expected to be seen rarely) birds (in caps above).   The Ruddy Duck numbers were well above average, but a lot of other things – especially the scaup – were average or below my high counts of recent years.  And why don’t coots visit here much anymore? And really, not a single Ring-necked Duck!? Nevertheless I find it very rewarding to regularly check one location, so I thoroughly enjoyed my extra effort this year.

On each visit, I also visited LakeAuburn, which is a much different body of water (deeper, sandier, and apparently without the invasive Chinese Mystery Snail that provides the sustenance for most of the birds on Sabattus).  Note, however, that as the numbers of ducks decrease on Sabattus, they begin to increase on LakeAuburn – the last lake to freeze in the region.

I can’t help but wonder if some of the birds on the lake on Monday would return to Sabattus if a warm spell opens the pond back up, and if it does, I am sure birds from points north might drop in as well as they are frozen out of lakes and rivers.  In other words, the duck-watching season on Sabattus may not be over yet, but I think I will be turning my attention elsewhere unless it warms up dramatically.

Meanwhile, on all of my visits to the two lakes, I added at least a few other stops in between in the hopes of finally finding a really “good” bird in Androscoggin County (away from Sabattus, that is).  Uh…nope.  My only real highlights away from the two lakes were the two Lapland Longspurs on Monday.  My rarity drought in AndroscogginCounty might continue, but the waterbird watching is certainly exceptional.

By the way, in a series of spring visits, I have found very, very few ducks on Sabattus Pond, for reasons unknown.  Therefore, other than my annual check on Maine Maple Sunday, I’ll have to anxiously await next October!