My Maine-New Hampshire Tour for WINGS is designed to take a comprehensive look at the wide range of breeding birds of northern New England, from Saltmarsh and Nelson’s Sparrows at sea-level to Bicknell’s Thrushes on the 6200ft Mount Washington.  From Grasshopper Sparrows and Upland Sandpipers in the blueberry barrens of the Kennebunk Plains to Boreal Chickadees and Gray Jays in the boreal forests, and from Spruce Grouse and Bay-breasted Warblers “Downeast” to Atlantic Puffins and Razorbills on MachiasSealIsland, this tour enjoys them all.

Over the course of 7 full days of birding and just about 1200 miles traveled (by van, not including what we did by foot and boat!) amassed 163 species, including 20 species of warblers, 4 species of alcids, 9 species of flycatchers, and 14 species of sparrows.  An outstanding whale/bird watch trip that produced 9 Fin Whales, over 150 Great Shearwaters, 6 Sooty Shearwaters, and an impressive 18 Leach’s Storm-Petrels among over 500 Wilson’s Storm-Petrels.  Breathtaking scenery.  Great food, especially lots of fresh lobster.  Moose and a Wood Turtle, too.  What’s not to like about this all-inclusive experience in the state where our motto is “The Way Life Should Be?”  I think our tour left in full agreement with the accuracy of this.

We began on Day One in the saltmarshes of Scarborough Marsh, comparing Saltmarsh and Nelson’s Sparrows.  “Eastern” Willets voiced their complaints, while Least Terns foraged nearby.  The nearby sandy beaches afforded an opportunity to study Roseate Terns and Piping Plovers, with lingering White-winged Scoters and a Red-throated Loon offshore.  Our first surprise of the trip was a Brant standing on a sandbar off of Pine Point – not a typical summer bird here in Maine.  As we scanned the sandflats for lingering shorebirds (just four Black-bellied Plovers), we spotted two distant American Oystercatchers.  Just as we started to strain to see them, one flies by right off the end of the pier!

By mid-morning, we had arrived in the Kennebunk Plains, surrounded by the state’s largest population – by far – of Grasshopper Sparrows and Upland Sandpipers with goodly amounts of Vesper Sparrows, Prairie Warblers, and the continuing Clay-colored Sparrow.  After a picnic lunch at a particularly birdy spot, we began our climb into the White Mountains.  Our first stop was at an active Black-backed Woodpecker nest, where patience produced visits by both adults, and views of two hungry youngsters bursting out of the hole.  As this was a major target bird of the trip, I added quite a few miles and minutes to today’s marathon to assure us a look at this often secretive (at least away from the nest) boreal specialty.

And as if this wasn’t enough, we had yet another major target yet to bag.  An after-hours private charter up Mount Washington into the realm of Bicknell’s Thrush was rewarded with exceptionally good views, and a chance to experience the winds and weather of the summit. 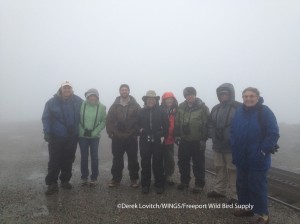 Day two began on the Caps Ridge Trailhead, with Gray Jays, Yellow-bellied Flycatchers, and Blackpoll Warblers, before we headed up another mountain for a second helping of Bicknell’s Thrush.  After telling folks that “there’s no way we’ll see a Bicknell’s better than we did last night,” I was made out to be a liar by crippling views of this thrush. 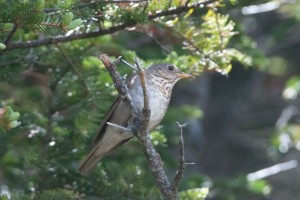 We also picked up a Philadelphia Vireo at one of my “secret spots,” and enjoyed some “bugs.”

Heading back into Maine, we spent the night in Rangeley, and come morning, Gray Jays dropped in to clean up after our picnic breakfast.  Kirk Betts joined us for a few hours of birding the Boy Scout Road, where Boreal Chickadees and an Olive-sided Flycatcher were well seen, and as we began our trek eastward, Purple Martins, Black Terns, and two (admittedly ridiculously distant) Sandhill Cranes at Messalonskee Lake nicely broke up the drive.

By the beginning of the fourth day, we were far Downeast in Machias.  We dipped on our first attempt at Spruce Grouse, but all was forgiven when we boarded our boat for MachiasSealIsland on a beautifully warm and sunny day.  Thousands of Atlantic Puffins, Razorbills, and many hundreds of Common Murres – many within just a few feet of the observation blinds.  How do you describe this magical place?  I simply cannot; it must be experienced.  I will let these pictures do the talking. 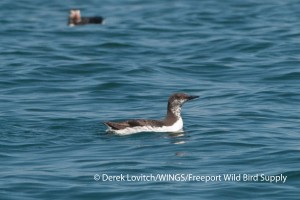 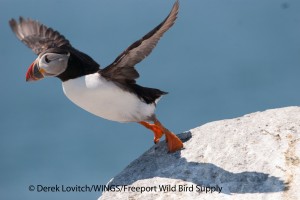 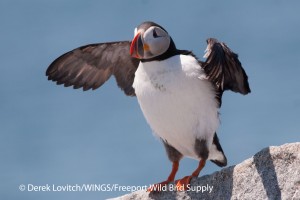 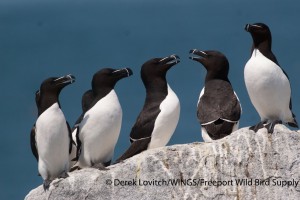 After lunch, we were joined by Chris Bartlett as we worked our way along the BoldCoast to West Quoddy Head and back to Machias.  On the hot summer afternoon, we didn’t see many of our targets, but we were adding birds to our list.  Unfortunately, we had yet to add Spruce Grouse.

Therefore, on the 5th morning of the trip, Operation Fool Hen (the colloquial name for Spruce Grouse) went into full effect.  The formerly most-reliable place in the state was no longer reliable (0-3 here), and I had pretty much resigned myself to failure by the time we entered the woods at one last place.  We were cleaning up some “dirty birds,” (birds not seen by the whole group), and while I was trying to get some people a look at a Swainson’s Thrush, a hen Spruce Grouse walks out behind me, about 10 feet away and starts preening. The grouse walks even closer to the growing group, including a family that enjoyed the show, patiently waiting to pass.  We watched for well over 15 minutes before she sauntered off.

Relieved and ecstatic, we continued down the trail.  On our way back, that family, now ahead of us, points to where we saw the hen grouse.  We acknowledged it, they moved on, and instead we see a spiffy male standing just off the trail.  He started walking towards us, we all froze, and he actually walks around a few people in order to take a dust bath within a few feet of us – in the very same spot that we saw the hen.  This guy was not going to be deterred!

Time flies when you’re having fun with Spruce Grouse, so our time was limited in Moosehorn NWR.  Luckily, we did see Bay-breasted Warbler, but before we knew it, it was time to move on and head towards Bar Harbor, where we enjoyed a lobster dinner the way lobster should be (abundant; and on paper plates with bibs and lots of napkins).

(Dawn on the Summer Solstice from the Back Porch).

Our second boat trip of the tour departed Bar Harbor on the morning of Day 6, and we headed towards Petit Manan to enjoy yet more puffins, Razorbills, and Common Murres.  And unlike Machias Seal, the tern colony here is present and active, with thousands of Common and Arctic Terns wheeling through the air, and at least a few more Roseates.  Heading further offshore, pelagic birds began to increase.  A conservatively-estimated 500 Wilson’s Storm-Petrels were joined by at least 18 Leach’s – probably my best-ever tally from a non-dedicated (no-chumming) pelagic. 150+ Great Shearwaters and 6 Sooty Shearwaters joined the party…oh yeah, and 9 Fin Whales!  It was one of my best pelagic bird shows on this 4-hour trip, and the Fin Whale show was dramatic as well.

The view from the summit of Cadillac.

Day seven was our last day of birding, and a lot was on the agenda once again.  A picnic and walk at Sieur de Monts Spring was highlighted by a great look at a day-hunting Barred Owl, and the scenic Auto Loop Road filled some holes in our list, and surprised us with a lingering immature Great Cormorant!

Heading towards Portland, we stopped for lobster rolls at the world famous Red’s Eats before birding around Brunswick, still adding some birds to our list, such as some rare-for-the-season Long-tailed Ducks.

LL Bean, Freeport Wild Bird Supply (of course to add a few more species to the list at the feeders), the world’s Largest Rotating Globe at Delorme, a colony of Fish Crows, and last but not least, a scrumptious dinner in Portland brought this remarkable trip to a grand finale.

I hope you’ll consider joining me on this tour when we run it again in 2015.  As with all of our trips and tours, stay tuned to www.freeportwildbirdsupply.com/birdingtoursinMaine.asp for more information.