It was a busy – and exceptionally productive – birding week for me! The extensive list of highlights – including two full days of private guiding which cleaned up on most of our regular wintering species in southern Maine – were as follows:

A handful of observations of note over the past seven days included both signs of spring and winter specialties.

The Blizzard of 2022 provided some great opportunities for cross-country skiing and snowshoeing locally for the first time this winter, so I took full advantage of that, even if it did further limit my dedicated birding during this busy week plus.  Interestingly, my most “serious” birding was a half day (post-snowblowing and shoveling) on Sunday searching Portland through Cape Elizabeth for storm-related birds, but that effort turned up nothing at all of note! Here are my observations of note over the past 9 days:

Unfortunately, at this time, the journal is only available online to members of the ABA. However, digital e-memberships (with access to all of the ABA publications) are only $30 a year, and you can purchase issues of the magazine directly from the ABA by emailing info@aba.org. Also, if you wanted to take a peek at the article, I do have a couple of extra copies here at the store for you to peruse.

Believe it or not, a hybrid heron is much rarer than a Steller’s Sea-Eagle, at least from a world perspective…in fact, it’s possible these birds are one of a kind!

It was another great week of winter birding for me! Unfortunately, we had friends visiting for three days and the Steller’s Sea-Eagle was not seen on any of them. In fact, it has not been seen since Monday morning, 1/24 in the Boothbay area. I joined them for two days of searching, and we did have several birds of note as we scoured the area thoroughly. Meanwhile, with the deep freeze continuing, river ice is building up and so it was a great week to see Barrow’s Goldeneyes – one of my favorite winter birds in Maine.

NOTES: Due to the posting of a blizzard warning for tomorrow, we are canceling the Saturday Morning Birdwalk and we expect to be closed for the day. Stay tuned to our store’s Facebook page for any updates.

It was a very good week of birding for me! My observations of note over the past seven days included the following:

This Week in Finches:

My observations of note over the past seven chilly days including the following:

This Week in Finches:

I like Barrow’s Goldeneyes! And I like getting to see them every winter, and sometimes in numbers…and only a few miles away from home. But I wish I could see more of them. 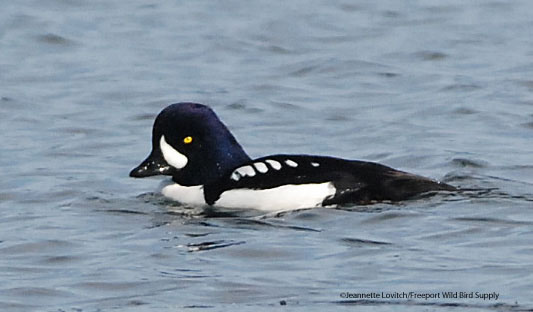 Unfortunately, with each passing year, I am seeing fewer and fewer. My local Barrow’s Goldeneye (BAGO) “patch” is the Lower Harraseeket River here in South Freeport. A couple of miles of river between Winslow Park and Bartol Island hosts the southernmost wintering flock on the East Coast…or at least what nowadays passes for a flock.

One of just a handful of locales in the state that regularly hosts more than one or two birds, this once-impressive flock has declined dramatically in the past ten years that I have been watching them. Scanning the river once a week, from early December through the middle of April from a variety of locations (Sand Beach, the Town Wharf, the Harraseeket Yacht Club, Winslow Park, and/or Wolfe’s Neck Woods State Park) I have kept track of arrival and departure dates, and perhaps most importantly, overall numbers.

“High counts” are the maximum number of birds seen at one time in a given time period. While some individuals come and go over the course of the winter, it seems to me that the seasonal high count is a reasonable way of estimating the local population (as keeping track of individual birds is impossible). And my high counts for each of the last nine winters show an alarming pattern:

It has become readily obvious that the less ice there is, the fewer Barrow’s concentrate in the Lower Harraseeket. A deep channel and strong tide combine to keep at least a stretch of the gut at the mouth of the river (between Winslow and tiny Pound of Tea Island) open in the coldest winters. Back in 2004-2005, the river was almost completely frozen, and the narrow strip of open water was so thick with ducks, especially Common Eiders, that it looked as if you could almost walk across the river on their backs!

We also know that the climate, and the temperature of Casco Bay, is getting warmer (yes, that is fact, and yes, this year’s cold winter/spring weather does nothing to disprove this – note that “climate” and “weather” are actually different words that describe different things!). Therefore, I optimistically wondered if the apparent decline in the population of BAGO was nothing more than a lack of ice-caused concentration. The less ice, the fewer BAGO I see.

Therefore, when about 90-95% of the Harraseeket froze this winter (the most extensive coverage since 2004-2005) and ducks concentrated in numbers not seen since then, I was cautiously optimistic that BAGO number would spike:

Not the spike I was hoping for. I searched long and hard to find BAGO elsewhere in the vicinity, but I did not see any (the closest was an overwintering bird in South Portland that has returned to the Fore River for the last two or three years now). That’s a 78% decline from the 2004-2005 high.

Unfortunately, Christmas Bird Counts occur too early in the winter to adequately gauge seasonal high counts of BAGO, although the graph does reflect a decrease in the past ten years (the long-term data set is clouded by low birds-per-party-hour totals as a whole, along with misconceptions about identification in the past).

But this decline is not just apparent in the Harraseeket. Birders have detected a decline in all other known wintering concentrations, especially in Belfast Bay. They are now longer seen on most visits in mid-winter there and it’s been a long time since I have seen a report from Bucksport. However, according to the 1996 A Birder’s Guide to Maine, *1 aggregations of 15+ birds are “regular features in most winters” at these two sites.

In other words, at least in Maine, the decline is real. And it’s time for the Department of Inland Fish and Wildlife to do something about it. No more half-assed, non-action policies that bow to the hunting lobby. No more “please tell us if you shoot one and then say you’re sorry and it will be OK” (with only a disincentive to do so) state policy. *2

In 2009 IF&W listed the Barrow’s Goldeneye as “Threatened.” …And has done almost nothing since, other than set up surveys that are conducted every four years. Oh, and they hung up some posters at boat launches asking people to not shoot them (might as well put a target on them, in my mind).

Let me be clear, there is no evidence to suggest that hunting is causing a decline in BAGO. I think much larger factors are at play. There’s acidification and warming of the ponds and lakes in their limited and narrow eastern Quebec breeding range to changes in winter food sources. Forestry practices could be reducing the availability of suitable nesting cavities as well. There’s lead ingestion and heavy metal bioaccumulation. Then there’s reduced ice in most winters in their primary wintering areas of the St. Lawrence estuary (thereby reducing how many birds come further south) to competition with other native and non-native species (BAGO eat small mollusks, especially mussels – could invasive Green Crabs be impacting the food supply for ducks here, too?). In other words, there are a lot of possible proximate and ultimate causes to the species’ decline. But if hunters shoot one or two (by accident, of course) of the remaining 5, well then the decline becomes even quicker. Even repeated disturbance from concentrated hunting pressure on other species could be impacting where the birds tarry, where they feed, and how much energy they waste fleeing boats and shots.

I am not opposed to waterfowl hunting. But I am opposed to hunting that impacts an endangered species (see, for example: Conservation and Management/Effects of Human Activity in the Birds of North America entry referenced below). The closure of a handful of tiny areas will affect very few hunters, and with more than 99% of the state still available to them, this rates as a minor inconvenience at most. However, this fraction of a percent of water closed to hunting could protect a significant majority of the wintering population – or at least what’s left of it. At the very least, this could buy us some time to find out what the root of the problem is.

I like Barrow’s Goldeneye, and if you do too, it’s time to pressure IF&W and politicians to act. Otherwise, there is a very legitimate chance that this bird will no longer be a part of Maine’s winter avifauna.

For more information on the status of BAGO in Maine, see:
https://www.maine.gov/ifw/pdfs/species_planning/birds/barrowsgoldeneye/speciesassessment.pdf