After spending a long weekend in Vermont – including quite a few birding highlights – it’s been mostly catching up here at the store. Nonetheless, I did have a great morning at Sabattus Pond on Friday.

Jeannette and I made a run for the border in our annual pre-hawkwatch roadtrip getaway.  We’ll be covering Katrina’s days off at the Bradbury Mountain Hawkwatch through the end of the season.  Then, my guiding season kicks off in full force through early July.  In other words, it’s a good time for us to get a little break.

This year’s destination was a visit with family in Vermont, followed by a few days in Montreal.  I had not been to Montreal before – no excuse for that, really – so this was a good incentive to head (mostly) west.  Sure, the weather could have been a little more seasonable, but we enjoyed a really great trip nonetheless.

While this trip wasn’t necessarily a “birding trip,” we obviously were going to do some birding.  And there were a few “goodies” around that, if nothing else helped guide us in fruitful directions.  First up was the Northern Hawk Owl that has been spending the winter in Waterbury, Vermont.  Since we had to pass through the intersection that the bird has been frequenting on the way to see the fam, I don’t think this counts as a chase, does it?

Although most hawk owls are notoriously tolerant of people, this bird was ridiculous!   People were walking back and forth on a trail right below it, and it didn’t care.

Then, spotting something of interest, it dove through the line of admirers, and landed in the snow.  It scuffled around for a bit, and then came up with a White-footed/Deer Mouse, which is proceeded to devour on a nearby snag…in clear view of everyone.  Returning to its original perch, it flew between two photographers, right at head-level! 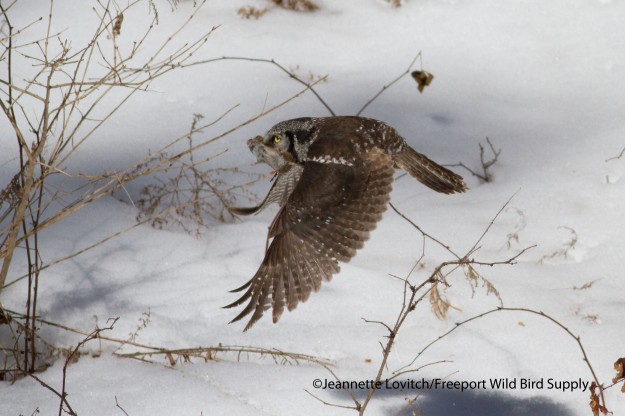 The lighting and the proximity were so good that I believe these are the best phone-scoped photos that I have ever taken!

After visiting friends and family, we departed the next day.  Of course, we couldn’t help but stop at the hawk-owl once again.  “Let’s just drive past this Northern Hawk Owl,” said no one, ever. 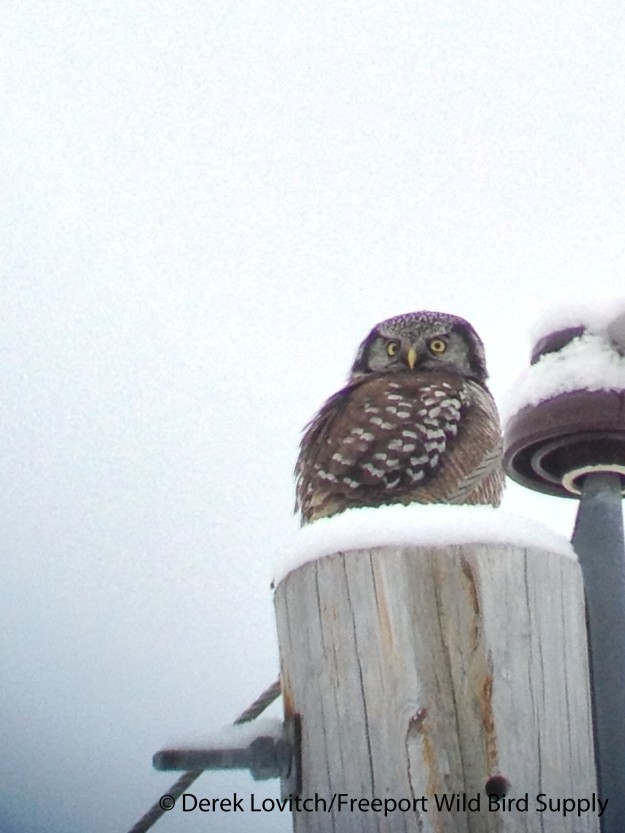 After lunch in Burlington…

…we dipped down to Charlotte to board the ferry over to Essex, NY.  With such extensive ice on the lake, the only open water is limited to the ferry channels.  Ducks have concentrated in this narrow band of open water, including some very good birds.  The Tufted Duck being seen here was nothing more than an excuse to take the ferry, and we are very glad we did. 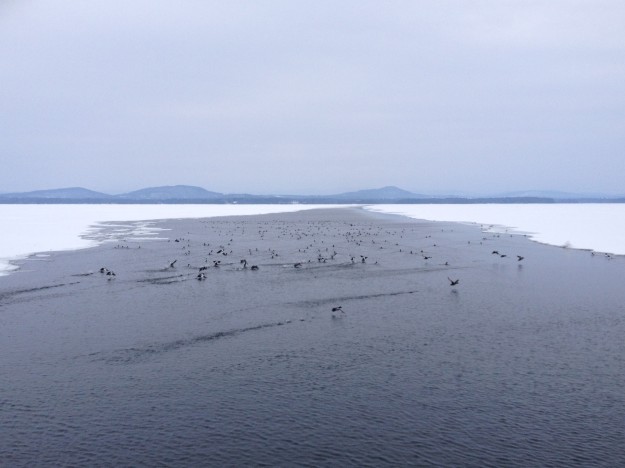 This was a great little “mini-pelagic!”  In fact, after we took the car across to NY, we hopped back on as round-trip passengers to have another look.  Good thing we did, because as we began the half-hour journey back to Vermont, the Tufted Duck was right in front of the bow!  And Jeannette “nailed” it, I think it’s safe to say.

In addition to the Tufted, impressive numbers of Common Goldeneyes and both Greater and Lesser scaup were enjoyed and extensively photographed.  Mallards, American Black Ducks, a small number of Common Mergansers and Buffleheads, 3 Ring-necked Ducks, 2 female Long-tailed Ducks, and 1 White-winged Scoter (the latter three only in New York, and the final two being good birds for the season here) were also present, and early in the third leg, we spotted a female Barrow’s Goldeneye among the masses for a nice addition to my paltry Vermont state list. Jeannette very nicely augmented here library of waterfowl –especially flight – photos, and this fun little ride turned out to be a real highlight of the entire trip. 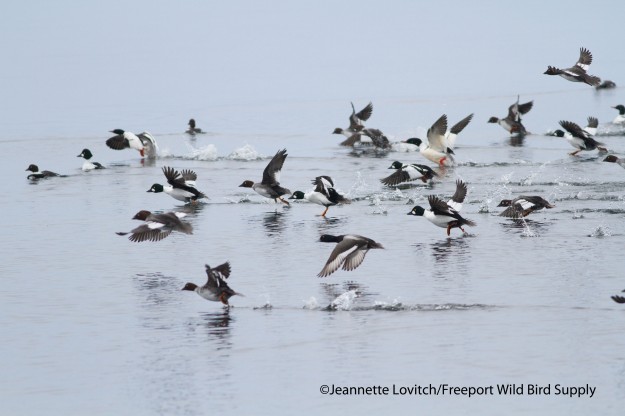 How many species can you identify in this photo?

A quick stop to look for coffee in Plattsburgh, NY resulted in what was perhaps the best cupcake we have ever had (a butter cream-iced tres leches cupcake at Delish), and eventually we made our way across the border and arrived in Montreal in the evening.

The next morning, we walked from our downtown hotel to Parc du Mont Royal, the expansive park in the heart of the city.  There’s been a Black-backed Woodpecker here all winter, but we did not know exactly where.  We did find a grove of Scotch Pine that had the classic sign of foraging Black-backs, but we didn’t see it…or much else, really.  Just like at home, deciduous-dominated forests are awfully quiet right now.

After lunch, we visited the Botanical Gardens, including their impressive Insectarium and extensive greenhouse biomes.  Stealing the show, however, was the free-flying butterfly (and some moths) exhibit.

A stroll around Olympic Park… 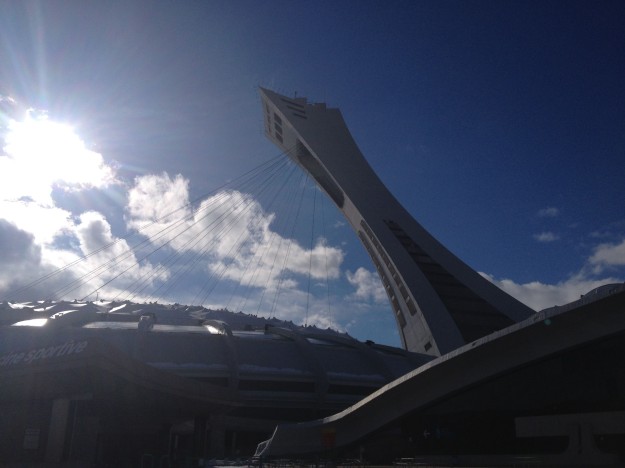 …Was followed by dinner, at a place with 30 kinds of poutine on the menu: Poutine la Banquisse! 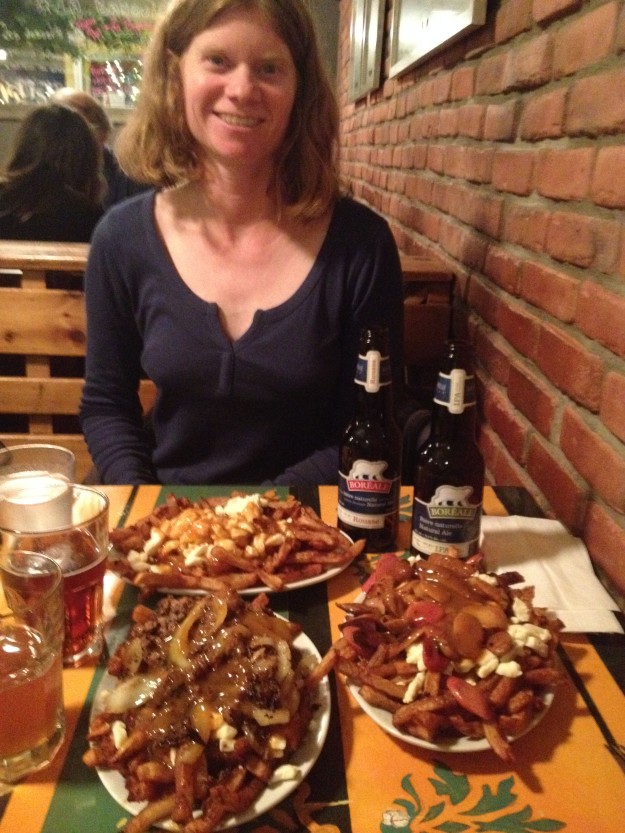 The next day, another walk at Parc du Mont Royal (which was actually less birdy than our first visit) …

…was followed by exploration of Old Montreal and the OldPort.  Unfortunately, the weather had taken a turn for the worse.

The storm was fully upon us…

…as we ventured out for our “splurge” dinner of the trip at the famous Au Pied de Cochon.  Because we didn’t have enough poutine the night before, we shared the intriguing and tasty fusion of a poutine temaki, and the duck carpaccio.  Entrees were outstanding as well, with Jeannette getting primal with a Bison rib as I went all in with what may have been the best sandwich I have ever eaten – and by far the most expensive!  With 10 grams of truffles and an apparent three pounds of butter, this was not your everyday grilled cheese! 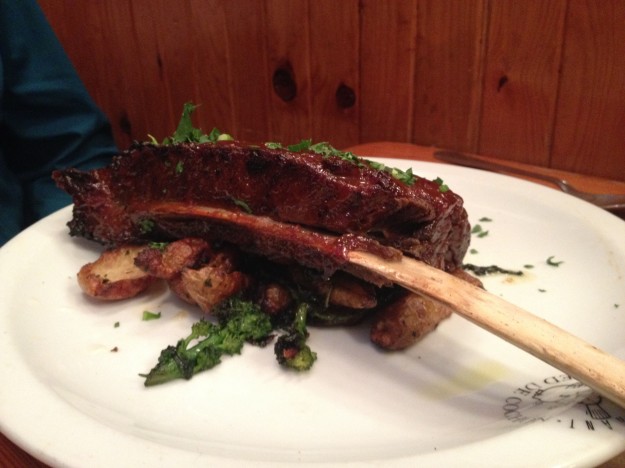 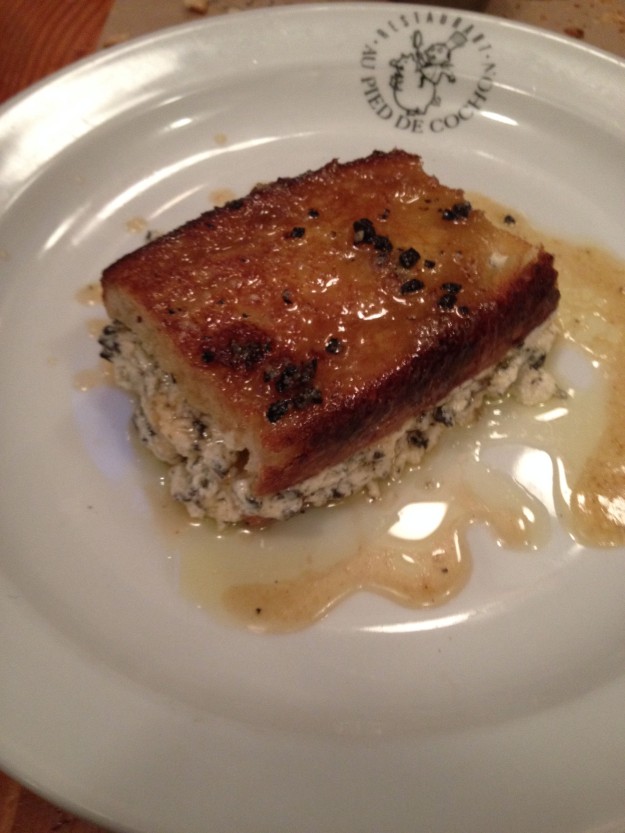 The snow was piling up as we departed the restaurant…

…and about 8 inches had accumulated by morning.  Now that we actually knew where to look for the Black-backed Woodpecker at Mont Royal, it turned out it was rather east to find after all! 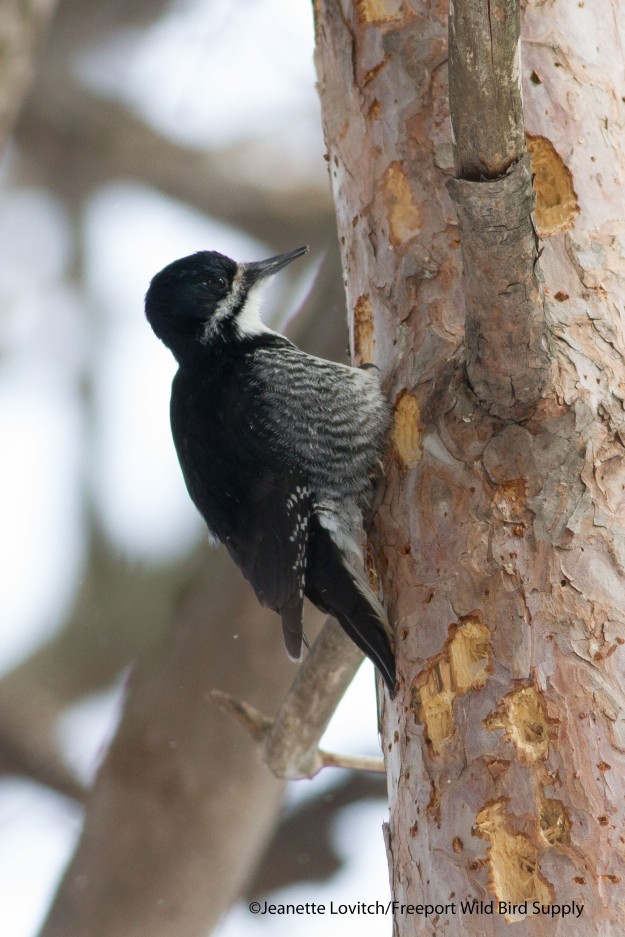 Before hitting the road, we took a walk around Ile Sainte-Helene, which was actually quite birdy; the birdiest place in the city during this short visit.  In addition to the usual woodland residents, goodly numbers of Cedar Waxwings and American Robins were present.  Waterbirds in the fast-moving river were limited to four Common Mergansers and a single Common Loon, however. 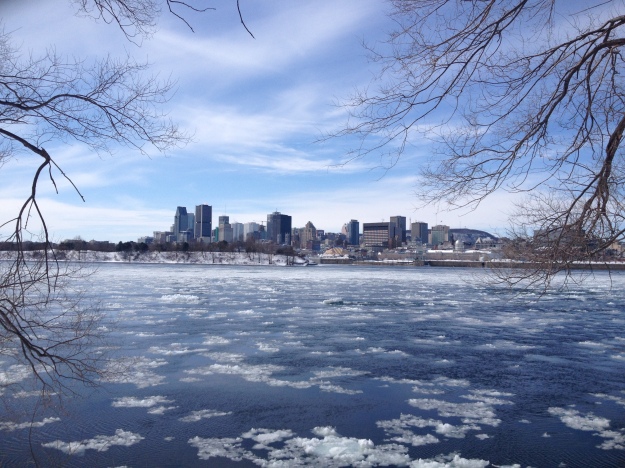 It was a long and slow drive home, in large part due to the heavy snow in the mountains.  With about two feet in some places, a few of the passes in northern New Hampshire and Maine were a little interesting.  I think it’s safe to say it was a good idea to have taken our Subaru on this road trip!

Back to work early in the morning on Friday, we were very pleased to be greeted at the store by some Red-winged Blackbirds.  The hawkwatch is underway, with a goodly 38 birds on the first day (6 Red-shouldered Hawk!), spring is definitely here…even if, once again, it doesn’t feel like it!