Luke Seitz and I embarked on a semi-serious “Shorebird Big Day” on Wednesday.  I say “semi-serious” because we didn’t exactly try too hard to build our list…at least not after our first stop.  Instead, we spent more time watching shorebirds, studying, and photographing them.  We still, however, tallied 14 species of shorebirds, but instead of heading inland to pick up Killdeer, Spotted Sandpiper, Solitary Sandpiper, and Upland Sandpiper, we just splashed in the water and studied dowitchers at Hill’s Beach.  It wasn’t a bad way to spend a gorgeous summer day.

We began in the morning at high tide by scouring Scarborough Marsh from the Eastern Road Trail.  If we were to have a chance at 20 species of shorebirds on the day, we would need to add a rarity or two from the pannes.  Unfortunately, high water levels from all of the recent rain minimized habitat, and shorebirds were not as plentiful as we would have preferred.  We did, however, see 2 or 3 Stilt Sandpipers, a decent bird in the summer.  Other than Greater Yellowlegs, with about 55 individuals, numbers were relatively low: 75 Semipalmated Sandpipers, 40 Short-billed Dowitchers, 25+ Least Sandpipers, 8 Lesser Yellowlegs, 3 Black-bellied Plovers, 2 Semipalmated Plovers, and 1 Willet.

Making up for the low shorebird totals, however, were the high wading bird totals: 85 Snowy Egrets, 60 Great Egrets, 40 Glossy Ibis, 39 Little Blue Herons, and 9 Great Blue Herons.  In addition to teasing out one of the continuing White-faced Ibises and spotting the continuing full Tricolored Heron, we also saw BOTH of the presumed Tricolored Heron x Snowy Egret hybrids.  Yup, there are two of these beasties out there!

The first is the bird that has been present all summer, with a ghostly cast to an otherwise Tricolored-like pattern.  Pure white is confined to the belly, the throat, and a thin line in the foreneck.

However, recently, a second bird has appeared, which is very reminiscent of the first, but has some splotchy areas of white, including mostly white wingtips.  I believe I saw this bird on July 18th when I was out with a client and sans camera; I remember commenting (and my field notes confirm) that I didn’t remember so much white in the wing

Meanwhile, it was nice to see that at least one of the White-faced Ibises continue, although at this stage of molt, it was impossible to age.  It was also not very close.  Here’s Luke’s best shot (mine were not passable at all).

After spending more time with waders and a little time of sparrows, such as this Nelson’s Sparrow… 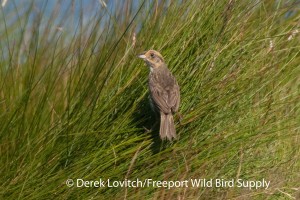 …we attempted to regain our shorebird focus over at Pine Point, as the tide was rolling out.  The mudflats had plenty of birds, including a few birds that would be important for a Shorebird Big Day, such as the pair – now, featuring two fledglings! – of American Oystercatchers (the only breeding pair in the state!).  We also had four Whimbrel, along with 296 Semipalmated Sandpipers, 124 Semipalmated Plovers, 25 Willets, 25 Short-billed Dowitchers, 19 Black-bellied Plovers, 3 Ruddy Turnstones, and 2 each of Lesser and Greater Yellowlegs.

But with a morning total of a mere 11 species of shorebirds, we elected for a leisurely lunch at Saco Island Deli instead of heading inland to work on our shorebird list – it is really too early in the season for a true Shorebird Big Day, but I am not sure if I have ever hit 20 in July, and since this was a day we both had a chance to get out all day together, we figured it was at least worth considering.  Anyway, on the incoming tide, we visited Hill’s Beach, where once again, we elected to forego shorebird listing for shorebird “quality” time, and therefore just spent close to three hours playing in the sand.

While the two Red Knots…

…4 Piping Plovers (a pair fledged two young here for the first time in recent memory), and 8 Sanderlings brought our count to 14 species on the day, we became distracted by photographing terns and studying dowitchers.  While our goodly count of 155 Semipalmated Plovers were augmented by about 65 Semipalmated Sandpipers, 8 Black-bellied Plovers, 4 Ruddy Turnstones, and 1 Least Sandpiper, it was the 120 or so Short-billed Dowitchers that kept our attention.

We were looking for individuals of the interior subspecies hendersonii, as I did on Sunday with Phil. (See blog and photos here:

https://mebirdingfieldnotes.wordpress.com/2013/07/28/biddeford-in-shorebird-season/).  We had what was possibly the same bright bird as Sunday (see above) fly-by, it was the paler birds that had us intrigued.

We thought the combination of a bright orange chest, and a fair amount of orange between the legs and on the undertail coverts, compared with the paler face and lightly, but distinctly spotted flanks and side (especially the side of the breast) of this bird made it look “good.” 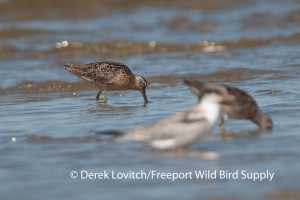 But we were pondering how extensive of color a hendersonii “needs” to have, as most of the individuals of the expected Eastern subspecies griseus, also were showing at least a touch of peachy-orange color in the undertail, etc.

Here are some typical, and typically variable, griseus for comparison.

In the end, we simply said, “who knows!?”  and went back to photographing other fun stuff, such as this Bonaparte’s Gull…

And this juvenile Roseate Tern…which was actually one of my targets to photograph today.

Ok, so we really quit on the Big Day attempt by about 10:33 in the morning, but 14 species of shorebirds included Stilt Sandpiper, American Oystercatcher, and two hendersonii Short-billed Dowitcher, along with two Tricolored Heron x Snowy Egret hybrids, White-faced Ibis, Tricolored Heron, a mid-summer marsh Merlin (these birds have simply got to be breeding in coastal Cumberland County!), it was hardly a bad day of birding.  In fact, it was actually a spectacular day!

“Shorebird Season” is in full swing, and the greater Biddeford Pool area is one of the best places in the state to observe and study shorebirds.  Although numbers usually pale in comparison to the Lubec Flats and Scarborough Marsh, and diversity usually lags well behind the latter as well, the area often provides some of the best opportunities to study shorebirds, between Ocean Avenue and Biddeford Pool beach on the high tide, and Hill’s Beach at low tide.

Today, Phil McCormack and I birded the area thoroughly, beginning with viewing of the extensive mudflats of The Pool itself.  Birds were already well dispersed by the time we arrived this morning, so it was a challenge to really study and sort through the masses, but our tally was as follows:
196 Short-billed Dowitchers
~75 Semipalmated Sandpipers
57 “Eastern” Willets (plus one distant bird that may have been a “Western”)
~ 20 Black-bellied Plovers
~10 Semipalmated Plovers
4 Whimbrels (first of fall for me)
4 Least Sandpipers
2 Greater Yellowlegs
1 Lesser Yellowlegs
1 Ruddy Turnstone

At dead low, Biddeford Pool Beach was shorebird-free (which is often the case, as birds take advantage of the ephemeral mud and sand flats of The Pool and Hill’s Beach), but as we birded the neighborhood and Ocean Avenue, we picked up a few birds of note, led by 2 breeding-plumaged Red-necked Grebes.  Three Black-crowned Night-Herons and a few migrant passerines such as two Eastern Kingbirds and an Indigo Bunting were also noted.

As the tide began to turn, we headed over to Hill’s Beach, and hit it perfectly!  Here, the rapidly approaching water pushed birds towards us, and concentrated them in the highest spots for last-minute feeding.  We were able to carefully and critically sort through each individual, checking for rarities and studying variation.  Our effort turned up a few “good” birds, led by a trio of “Hendersonii” Short-billed Dowitchers (the prairie subspecies), a fairly-rare-but-regular stray to Maine.

The third bird we found, was the brightest of the lot, and was very obvious with its rufous coloration throughout its underparts.

The other two were quite a bit paler, so were a little tougher to tease out.   I managed a crummy photo of one of them.

So if the shorebird show was quite good, the tern show was simply great.  At least a hundred Common Terns, including many begging juveniles were present, along with at least 30 Roseate Terns.  A few Least Terns also joined the fray, including this adult standing watch on its fledgling. 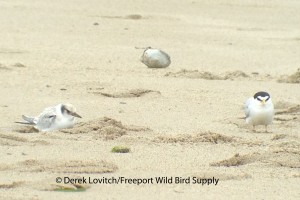