On another damp and dreary morning at Florida Lake Park in Freeport on Thursday, I encountered 25-30 Yellow-rumped Warblers and 15 or so Palm Warblers. That was my best total of the season there so far, but in the last week of April through first week of May, I often see tallies of each into the triple digits.

On Friday it was drier, but still cool and raw at Morgan Meadow WMA. I finally hit 5 species of warblers on a morning with my first-of-year (finally) Black-and-white Warbler.  About 20-25 Yellow-rumped and about 15 Palm Warblers were present. For perspective, on 5/3 last year, I hit 10 species of warblers at Florida Lake.

These are two of my favorite mid-spring migration patches, and in most years, I am at Florida Lake Park nearly every day. But this “spring”, it has been lackluster at best; worthless at worst. There just aren’t many birds around.

But it is definitely the spring for warblers at feeders!  After our Facebook post on Wednesday garnered lots of attention and feedback, I thought I would expand a little, as clearly this is a very unusual – perhaps even unprecedented – event. 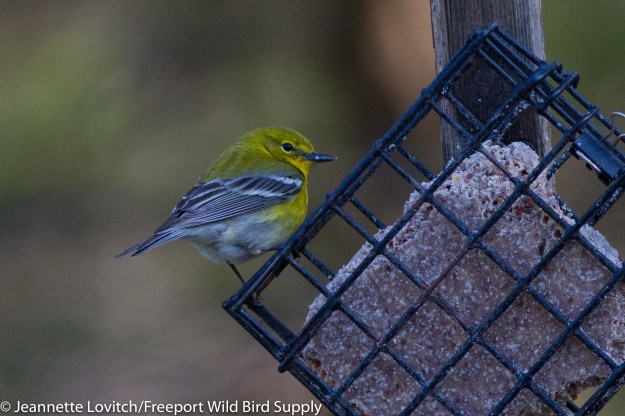 Pine Warbler is our only regular, wide-spread “feeder warbler” in most seasons

At home in Pownal, we’re up to 20 Yellow-rumped (and our usual pair of Pines), with as many as 8 Yellow-rumps frequenting the feeders at the store this week. We see them annually on our feeders at home, especially on damp and cold mornings, but this year the flock has been slowly but steadily building and has been consistently present for almost 3 weeks. In both locales, a diversity of food is being consumed by this normally-insectivorous (at least in spring and summer) species. In rough order of popularity, they are eating: live mealworms, dried mealworms, insect suet, Nutsie and Mr. Bird nut blocks (especially the Bugs, Nuts,&Fruit block), peanut splits, Birdberry jelly, and even some seed. While a little hulled sunflower isn’t surprising, at home, we even have them gobbling up white proso millet from our tray feeder! 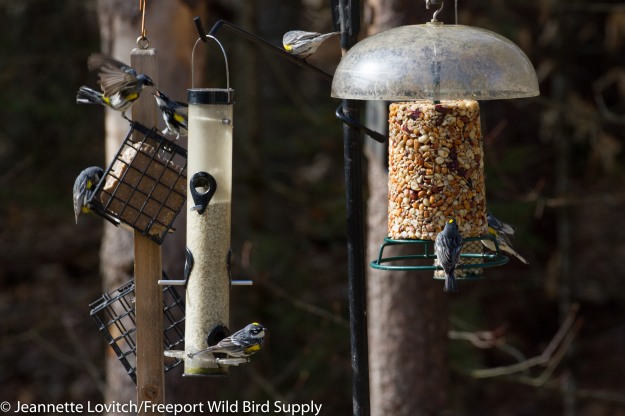 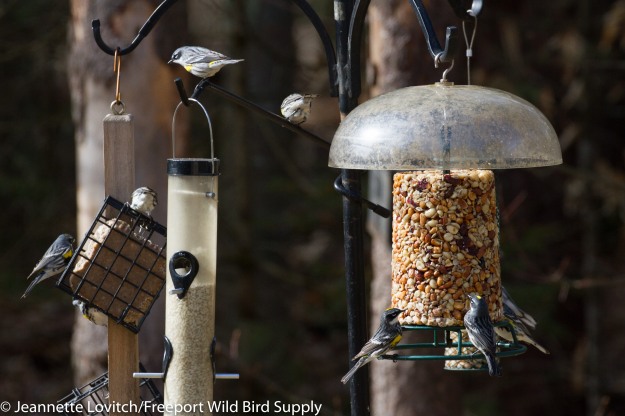 In fact, until Thursday, I’ve had more Yellow-rumps at our feeders than on any morning at Florida Lake Park! And this is instructive.

Midges are not yet emerging from the pond there, and even through some Red Maples are finally blooming, insect activity has been minimal or even non-existent at this important early-flowering tree. The phenology (to put it simply, the timing of things in nature over the course of the year) is off –way off – this spring. Food resources are not keeping up with the calendar.

The jet stream is stuck to our south, resulting in unseasonable cool and very unsettled weather, with a steady progression of storm systems and disturbances crossing our area. This pattern is impeding the progress of our spring, and of migrants arriving from the south (I have yet to even see a Black-and-white Warbler this year, for example!). But the cool and wet weather is resulting in natural food sources being well behind schedule, so the birds that are here – on time in many cases – are searching for alternative food sources. And therefore: warblers at feeders.

This diagram of the jet stream from 4/30 shows the tight gradient and zonal flow that has been dominating our weather pattern and is preventing the arrival of warm temperatures and “spring.”

Or, as better explained by the National Weather Service office in Gray:

Meanwhile, cherries, apples, crabapples, Serviceberry, and other important early-season flowering trees aren’t even close to blooming. Nectar, pollen, and even the petals and new buds are consumed, but more importantly for most of our migrants, those flowers attract insects that are then eaten by birds. The forecast is for some better conditions for migration in the coming days, and that will start to deliver us newly returning migrants, but those birds will also have fewer food sources than normal.

In seasons like this, the supplemental food from well-stocked feeding stations becomes more important than usual. Ruby-throated Hummingbirds are already being reported; what would those birds do without a nectar feeder (no red dye!!!!) right now? And of course, who knows what kind of condition all of these hungry Yellow-rumped Warblers would be in right now without feeders.

Soon, other migrants such as orioles, tanagers, catbirds, and a wide array of warblers (or Neotropical migrants) will be arriving, and they need food after their long journeys. Especially until spring catches up (those long-distance migrants have no idea how delayed our season is up here), feeders will continue to be important for migrants – and unexpectedly productive birding hotspots.

There are a lot of hungry birds out there right now, and without a doubt, many of us will get to enjoy species we don’t usually get to see, or at least no so closely. So put your jacket on, come by the store for some high-quality foodstuffs (our insect suet is flying off the shelves right now!) and keep that feeding station well-stocked.  Our migrants thank you.