Great friggin’ Black Hawk. In Maine. Nope, not on my predictions list. And not in a city. And not eating squirrels. And not in the snow…

Yup, it’s that time of year again. Hey, remember when we couldn’t wait for 2017 to end? And then 2018 happened? Yeah, well…come on 2019 – we need you! But 2018 did feature some incredible birding in Maine, with some “Mega” rarities that at least provided temporary distraction from everything else.

And as 2018 comes to a close, it’s once again time for my annual Predictions Blog, where I view into my crystal binoculars and attempt to forecast some of the “new” birds to grace the State of Maine, and my own personal state list, in the coming year.

But first, let us check in with my 2018 Predictions post, and see how I did.

For the second year in a row, an impressive five birds were new to Maine in 2018. The first new bird of the year was a Violet-green Swallow in Bar Harbor on April 14th. I had that on my long Honorable Mention list, but I did not have it ranked in the top 25.

But I did have Roseate Spoonbill at #4, and one arrived in a farm pond Sebec on August 27th (NOT where I would have predicted the first record to be!). I, and many others, were lucky enough to see this bird during its stay of several weeks.

A Western Wood-pewee in June in Jonesport on June 12th provided the state’s first confirmed record, but it wasn’t chaseable. This was #17 on my Predictions List, but it would have been much higher if it was easier to identify, and especially confirm!

Monhegan got on the scoreboard once again when it hosted the state’s first Gray Flycatcher on October 4th – #20 on my list. I feel western Empids are under-detected in Maine, so this was probably more overdue than unexpected.

And the fifth, and certainly not least, was the incredible and mind-blowing Great Black Hawk that first showed up in Biddeford on August 6th and remained for a few exciting days. After a tantalizing sighting on October 30th on Portland’s Eastern Promenade, the bird has called Deering Oaks Park – and nearby neighborhoods – home since November 29th! Thousands of birders from across the continent have been treated to this insane occurrence. Not only is it a first for Maine, but it has been conclusively identified as the SAME BIRD that provided North America’s (US and Canada in birder-speak) first record on South Padre Island in Texas in April of this year. And no, I have no explanation for this…or how it’s still alive. 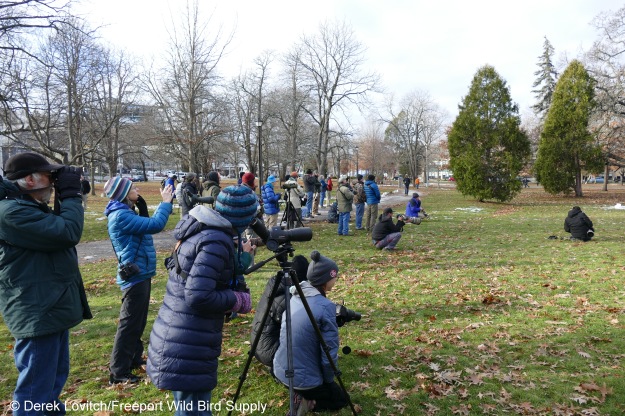 So I went 3 for 5 on predictions for 2018. Not too bad! The Violet-green Swallow was on my Honorable Mentions list as well, but no, I – nor not another person on this planet – predicted a Great Black Hawk in Maine! And I was so very close on my #1: Neotropic Cormorant. Literally close, as in just a few miles, as New Hampshire’s first was discovered in Gorham in August, just up the Androscoggin River from the Maine border.

Therefore, my updated predictions for the next 25 species to occur in Maine for 2019 is now:

Personally, I added 3 species to my own Maine list this year as well. There was the aforementioned Roseate Spoonbill that we caught up with “on the way” back from a weekend of birding fun with friends in Washington County on August 29th. This was #22 on my predictions list for myself. 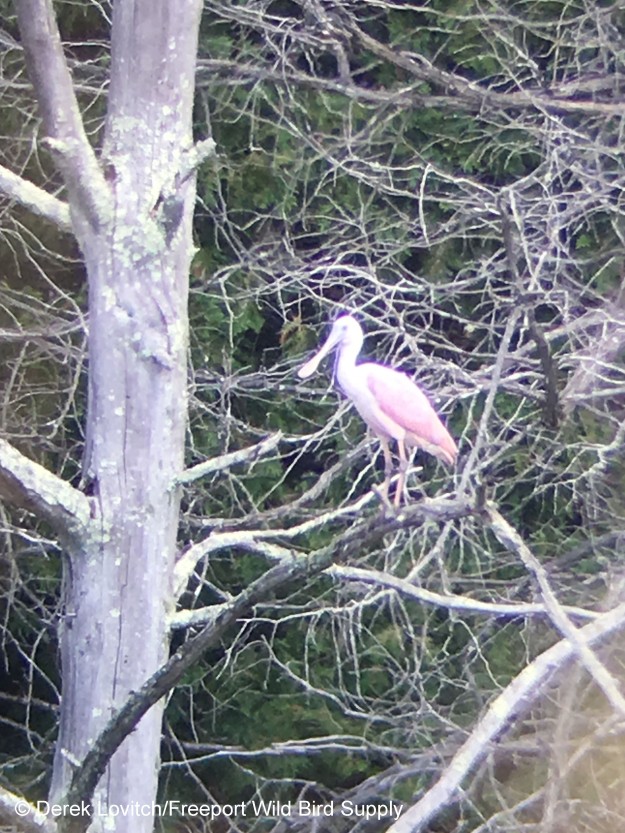 A territorial Chuck-will’s-widow that was found in Orland on June 9th luckily stayed around, singing its heart out, long enough for me, and a carload of friends, to enjoy it on the evening of June 26th. It was on my honorable mention list, but no credit is given for that.

Then there was the Great Black Hawk that I definitely dropped everything to chase back in August, and I have visited several times since in Portland. Just because it’s a Great Black Hawk in Portland! And no, it wasn’t on my personal predictions list either, obviously.

Then, as always, there were the misses. My Great Skua (#1) nemesis continues, with several weathered-out boat trips out of Bar Harbor late in the fall once again. But, I do have a Bonxie on my state list now!

Rapidly rising up the list of nemesises, however, is American White Pelican (#5)! One was in Wells while I was leading a tour on on Monhegan in May, and then Jeanette and I dipped on one in December, also in the Webhannet Marsh in Wells. We got a chance to look for it the day after it left (and arrived in New Hampshire) after about 24 hours in the Maine. On Christmas Eve, it was spotted briefly about a half hour after we drove through Portland on our way south, and was seen by a lucky few on Christmas Morning. Jeannette and I go away on Thursday – I have no doubt it will show up and remain visible for several days while I am gone.

I missed another Slaty-backed Gull (#12) as well, one that showed up in February while Jeannette and I were on vacation. A Brown Booby (Honorable Mention) off Bar Harbor in June wasn’t chaseable.

But, we are in often-unpredictable times, and this includes the bird world. Increased trans-Atlantic shipping could offer respite for a bird to arrive “ship-assisted” (we’ll save that discussion for another day, but in my opinion, we’re in the Anthropocene, so riding a cargo ship is just as “natural” as flying a thousands miles in the wrong direction on its own). The globe is warming – droughts, fires, floods, extreme hot and cold temperatures, the opening of the “Northwest Passage…” Could pesticides impact a bird’s ability to navigate? Recent research suggests so. So really, I could probably put any of the world’s 10,000+ birds on my predictions list and have a chance at this point!

Without vagrancy, no remote islands would have birds. No Hawaiian honeycreepers or Darwin’s Finches. These anomalies that excite us birders are not always evolutionary dead ends, but perhaps the vanguard, the pioneers, of a new species that in 10,000 to 1 million or so years, might be added to my next 25 species in Maine list!