“Shorebirds and Beer” was our first-ever “Birds on Tap – Roadtrip!” in partnership with our friends at The Maine Brew Bus last August. Now our 6th trip together, combining casual yet instructive birding in some of the state’s best seasonal hotspots with visits to two of our fantastic local breweries, we planned a return to Scarborough Marsh – where it all began!

And by popular demand, we added a second date. So this year, we had two “Shorebirds and Beer” departures, on August 7th and again on August 14th.  Both visited Scarborough Marsh, focusing our efforts on migratory shorebirds, but combined pairs of very different breweries.

We began the August 7th visit to Scarborough Marsh at the Eastern Road Trail.  A nice variety of birds were observed, including a couple of very cooperative singing Nelson’s Sparrows. Unfortunately, we found our destination, the salt pannes on the northern side of the marsh to be completely bone-dry due to this year’s drought. Needless to say, the numbers of shorebirds were not what we were hoping for. In fact, other than a few small groups of Least Sandpipers popping in and out of the grass, the pannes – often the most productive place in the entire marsh at this season – were completely devoid of shorebirds! 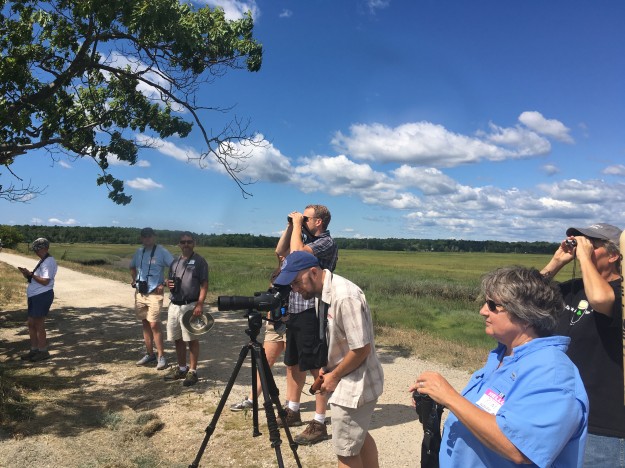 However, along the road, we had some good instructive lessons, including ultra-cooperative Least Sandpipers than began our introduction into shorebird identification. We learned how breaking shorebirds down into family by shape and size first narrows the choices, and allows you to focus on just a few species to identify. We even had a perfect example of this, when three members of the genus Tringa were standing side-by-side as a dainty Lesser Yellowlegs joined a couple of Greater Yellowlegs while a bulky Tringa-on-steroids, Willet (of the Eastern subspecies, for the record) looked on.

Heading over to Pine Point as the tide rapidly rolled in, various human disturbances in Jones Creek limited shorebird diversity, but we could not have asked for more cooperative Semipalmated Sandpipers and Semipalmated Plovers (about 200 and 100, respectively) that really allowed us to practice our plover vs. sandpiper feeding shape and style dichotomy. 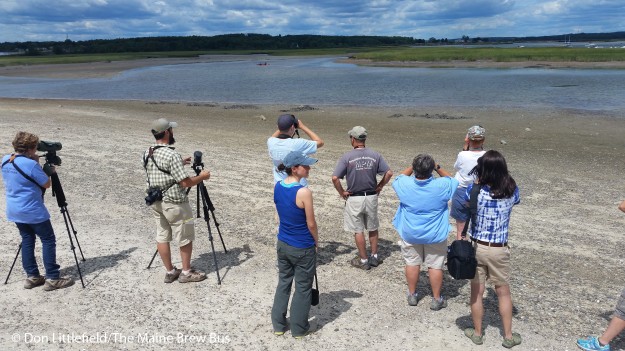 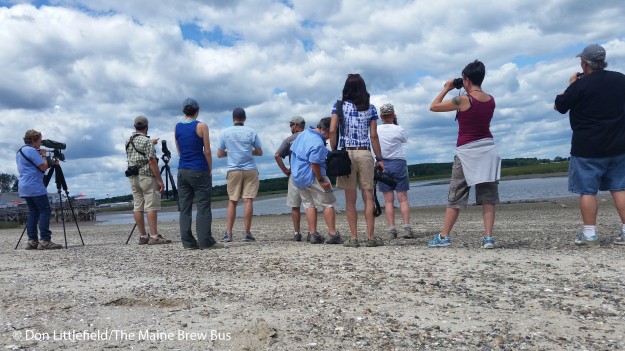 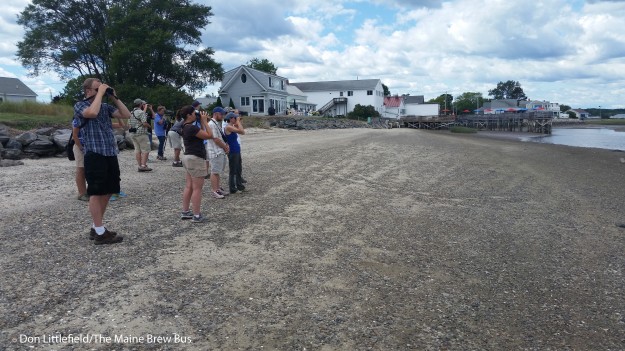 We then moved on to work on specific identification.

The remainder of our birding time was spent scanning the last of the distance sandbars (adding Black-bellied Plover to the shorebird checklist), before one of the members of the group called me over to check out an odd bird she found in her scope. It was an American Avocet!

While distance and heat shimmer precluded documentation photos, everyone was treated to a look or two in the scope of this very rare-in-Maine bird that isn’t seen every year anywhere in the state. While the long, fine bill was barely discernable at the distance, the very long legs and overall tall size (compared to nearby gulls) coupled with the distinctive tri-colored appearance (buffy head and neck, white underparts, and black wing with a broad white stripe) looks like no other.

First up was Barreled Souls in Saco, the only brewery in the country that is producing 100% barrel fermented beer in their Burton-Union system. Producing a mere 400 barrels a year – yet still offering 10-12 brews on tap at all times! – this time-consuming process which included two stages of fermentation, allows for the creation of some very complex beers.

Our samples today began with Half-Shilling, a very-light-bodied and low-ABV Scotch Ale as an introduction. Rosalita followed, using agave nectar in the primary fermentation and then steeped with hibiscus flowers during secondary fermentation, making for a very floral and subtly-sweet brew.  Space Gose was next, a summer refresher made with Maine sea salt, lemon zest, and coriander. By request, we then did a complete beer-wise-180 and shifted over to a heavy Barrel-aged MCAM – a very unique breakfast porter made with cinnamon, French toast, and bacon!  The spice, sweet, and smokiness were evident, as were the hints of bourbon from the bourbon barrels it was aged in. It was a potent, and very tasty, beer and a good representation of Barreled Souls’ creativity. 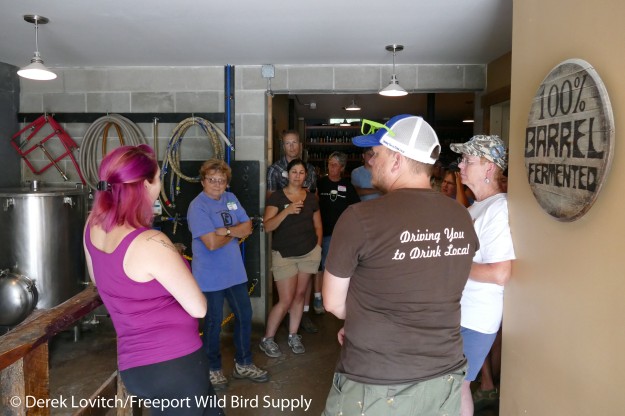 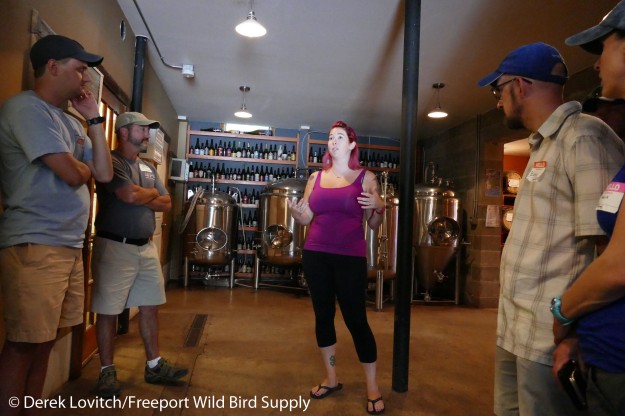 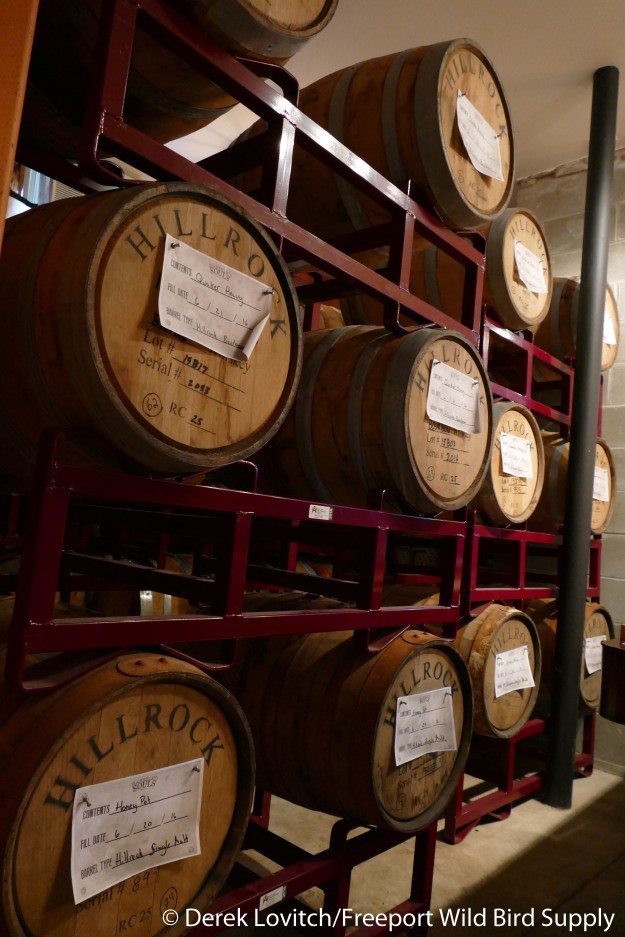 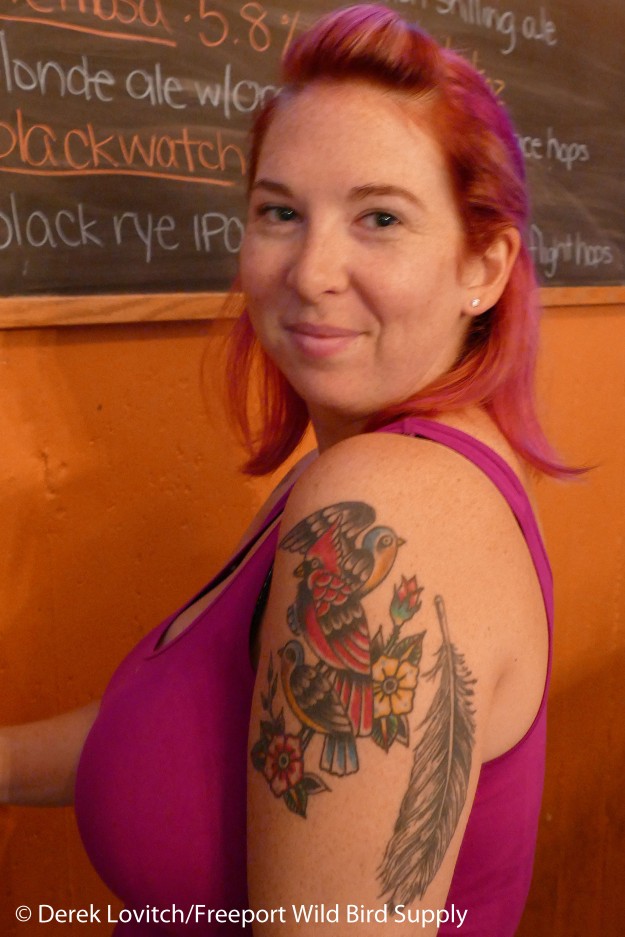 Kristi shows off her very-appropriate for a birding/beer tour tattoo.

Our final destination of the day was Lone Pine Brewing in Portland. We began with their flagship Portland Pale Ale, using 90% Aroostook County-grown malts. This is a really great pale, with lots of flavor but incredibly smooth and lacking bitterness. Pale ales are occasionally “boring” to those who like a lot of hops, but this exceedingly well-balanced beer could be a new go-to for quite a few of us on the tour.

Their new Brightside IPA was next on our agenda, and I would put this right up there with the best IPAs in the state. Bright and citrusy, yet without that overwhelming bitterness that often pervades stronger IPAs (this one clocks in at a potent 7% alcohol), it may be way too easy-drinking. It was also a very “accessible” IPA for the non-hopheads. One member of group in particular, who normally doesn’t like IPAs at all, was actually quite a fan of this also well-balanced beer. For me, a sign of a truly great beer is one that is so good is that it appeals to those who normally don’t like that particular style. 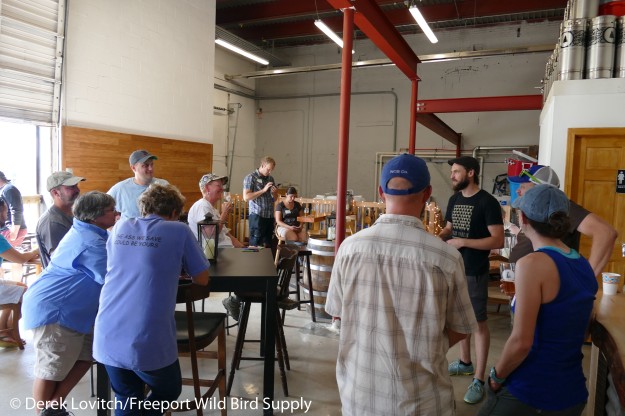 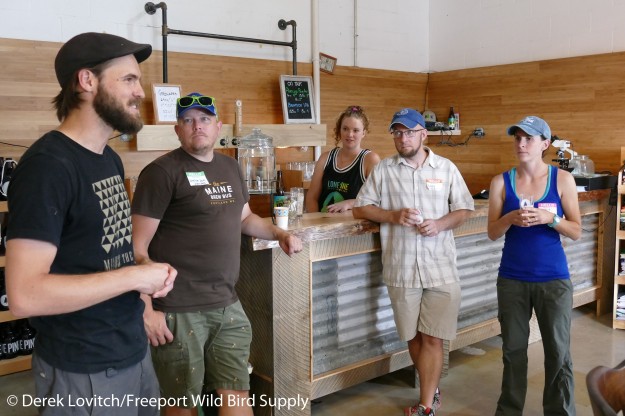 The following weekend, we once again began our birding at Eastern Road. Despite some rain in the past few days, however, the salt pannes were still dry. But to and fro, we encountered a nice mix of shorebirds, including some unbelievable cooperative Least Sandpipers once again. 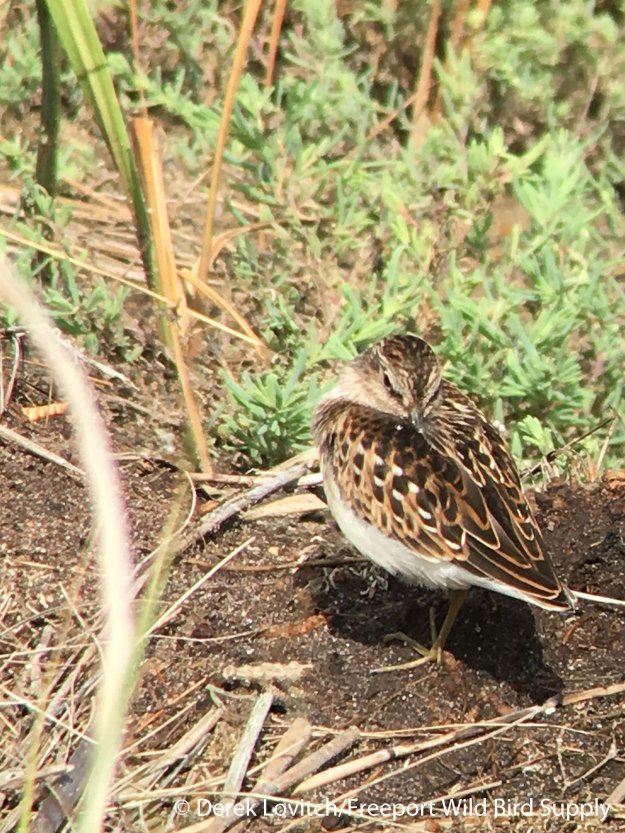 This one was phone-binned (a photo taken with an iPhone through my binoculars)!

Three Spotted Sandpipers – our first shorebirds of the day, actually – were encountered as we began our walk, and a decent number of Semipalmated Sandpipers were in the dried pannes. Both Lesser and Greater Yellowlegs were seen together for instructive studies. A distant hunting Northern Harrier, more singing (but this week, not seen) Nelson’s Sparrows, and lots of Cedar Waxwings and Song Sparrows foraging in the trailside scrub were among the highlights. We also took the time to watch Common Wood-Nymph butterflies, Great and Snowy Egrets, and stopped to enjoy the magnificently beautiful color of the eyes of Double-crested Cormorants.

On the walk back, with the tide just starting to recede, we had the opportunity to check out a few Semipalmated Plovers, Semipalmated Sandpipers, and a Least Sandpiper all side-by-side, just about 20 feet away.

A quick stop at the Pelreco marsh produced yet more Least Sandpipers, a better view of the details of Greater Yellowlegs, two spiffy adult Little Blue Herons, and most importantly: Patches! Arguably one of the rarest birds in the world, this Tricolored Heron x Snowy Egret hybrid that has been frequenting the marsh for the past 3 years put on quite a show for us. It could – hypothetically – be the only one of its kind! 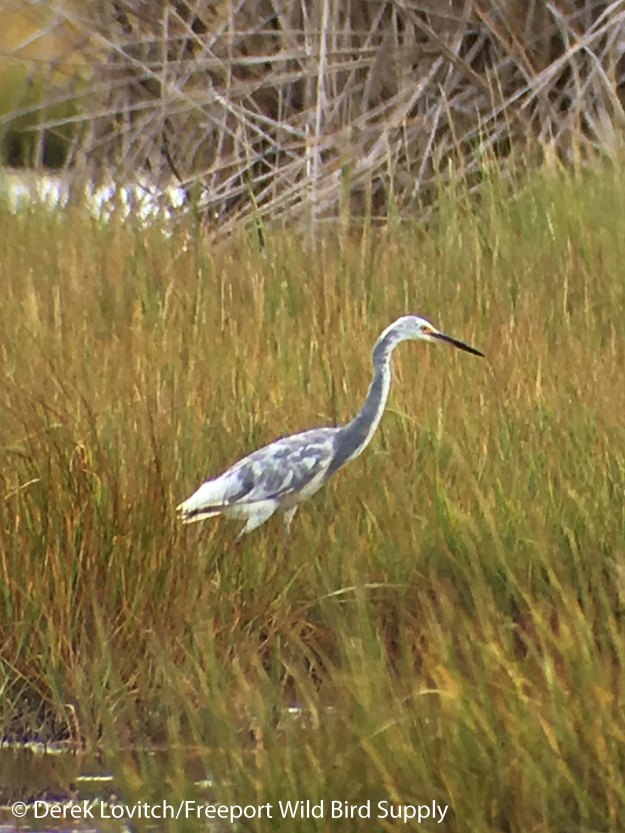 Thanks to a change in brewery itinerary for this second run of “Shorebirds and Beer,” I was able to stall at the marsh long enough to allow enough water to flow out that mud was rapidly being exposed at Pine Point. And with it, excellent numbers of all of the expected shorebirds began to appear: 400+ Semipalmated Sandpipers, 300+ Semipalmated Plovers, 150+ Black-bellied Plovers, 22 Short-billed Dowitchers, 8 “Eastern” Willets, 6 White-rumped Sandpipers, 4 Ruddy Turnstones, a few Least Sandpipers, and 2 Greater Yellowlegs.

No American Avocet though, but a hunting Peregrine Falcon zipped through, causing quite the ruckus.

And then it was once again beer o’clock, and today we began our beer-ing tour with a visit to South Portland’s Foulmouthed Brewing. Only open for 7 weeks, it was a new destination for everyone on today’s tour – myself included – and we learned all about the owners, the fledgling (see what I did there?) brewpub (yup, they opened a restaurant too), and their wide range of beers.  We even enjoyed a not-quite-ready-for-prime-time sample of their new “Blue Balls,” a Belgian dark, strong beer with blueberries. Still a week or two from being finished, it was a great introduction to their creative brewing side. 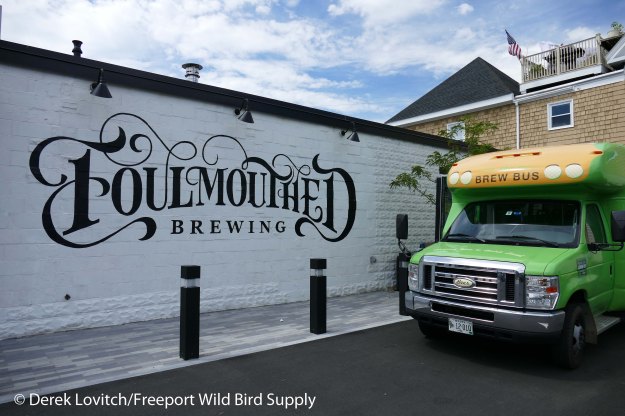 Inside at the brewpub, we sat at the big kids’ table and sampled four of their current offerings. Beginning with Brat, a German-style session with its bright and clean Noble hop finish, we moved onto Half Wit, a “hybrid” (not of heron and egret, mind you) of a Belgian Wit and an American Pale. A favorite of many on today’s visit, it was smooth and accessible, with enough body and flavor to hold its own. Kaizen Saison was up next, with its rotating hops producing a different flavor and aroma profile with each batch. We finished up with Rhubarb de Garde, a strong amber aged on rhubarb. I found a little extra sweetness and especially just the hint of tart from the rhubarb complimented each other nicely.

Our final beer stop of the day was a return trip to Lone Pine Brewing. Tom once again took us through their methods and philosophy, and shared with us their Portland Pale Ale and Brightside IPA. The more I drink the Portland Pale, the more I love this perfectly balanced beer.

And Abby was dressed in our honor today.

While Don, always attentive, looked like he had just spotted a Blue-footed Booby.

With our final sips of Brightside, the second installment of Shorebirds and Beer came to a close and it was time to head back home. Every day is different during the window of shorebird migration, and these two visits to Scarborough Marsh exemplified that. A wide range of shorebirds were studied, as we started to expand our identification – and appreciation – toolbox. And between Barreled Souls, Lone Pine, and Foulmouthed, we were exposed to a wide range of beer styles and methodologies. 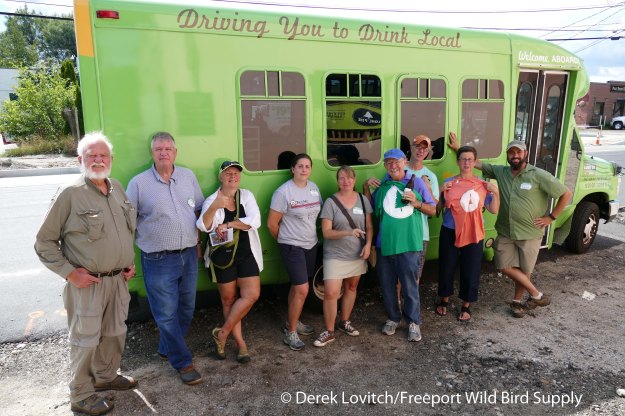 And both are the goals of our Birds on Tap – Roadtrip! series: exposure to some of our seasonal birding highlights and our vast array of fantastic local breweries. We hope you’ll join us for our next roadtrip, on October 9th, when we head to the deep south to visit Kittery’s Fort Foster and Seapoint Beach for our birding, and Tributary and Hidden Cove Brewing for our beering. Hope to see you then!