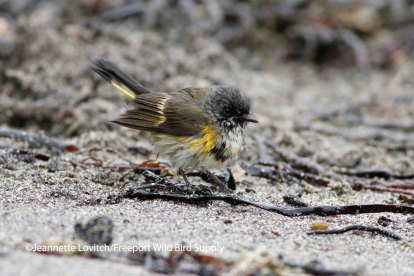 These bedraggled, exhausted, and desperate birds arrived on Monhegan in bad shape, and they didn’t have to contend with a lighted tower or spinning blades. (Clockwise from top: American Redstart, imm male; American Redstart, female; Yellow Warbler, adult male; a vagrant Acadian Flycatcher).

Some bad ideas just never go away. And it seems like the idea of putting industrial wind turbines off of Monhegan Island is one of those.

We have been vehemently opposed to the industrial wind development in the Gulf of Maine off of Monhegan Island from the start, and we have been outspoken in our concern about the impacts of this development. It’s simply the wrong place for such an endeavor. The costs far outweigh the benefits, especially the inordinate risk such structures would pose to migrating birds. And one of the densest concentrations of migratory birds (and birders) is simply not where you put so-called “green” power. There’s nothing “green” about poorly-sited energy development. And this is as poor of a site as you could find in Maine.

After the University of Maine-led consortium, Maine Aqua Ventus, failed to win a bid for Department of Energy funding, it looked like the project was dead. However, the recent announcement that the consortium has received $3.7million in federal funding with the possibility of more to come has us concerned once again.

The wind industry continues to propose locations for new turbines that are poorly sited and do nothing to minimize risks to birds and bats. This is happening across the country from California to Lake Erie to Maine. Monhegan Island is one of the most significant stop-over spots for thousands upon thousands of migrating songbirds in fall and spring – and therefore birders and wildlife tour operators such as ourselves. Most of these birds migrate at night. The size and height of today’s turbines necessitate lighting. Lighted structures disorient birds, especially under cloudy and foggy conditions so common on the Maine coast. Birds are drawn in and then circle the light in an attempt to reorient or simply escape the halo of light. Unfortunately, in the process, many can collide with the structure, each other, or simply drop dead of exhaustion as their flight muscles are metabolized in a last-ditch effort to find safety. New innovations are being developed to harness power from the wind without using massive blades, and this is where government funding and research should be directed – new technologies that maximize efficiency and minimize the risks to birds and bats.

Additionally, the wind industry often uses their own surveys to state that many of their projects pose little threat to wildlife. Such research proves to be woefully incomplete as they are generally based on carcass searches. Scavenging makes this methodology fundamentally flawed and completely irrelevant to offshore development projects. Additionally, much of this information is deemed “proprietary”, so the public rarely knows the full extent of their impacts. In a place as important to birds as Monhegan, a wind farm is not the avenue to pursue for energy generation. While nearshore wind development is much less conspicuous to humans, the risks to Maine’s migrant birds and bats cannot be discounted. The benefits of wind power have been shown to be under-promised again and again and they do not outweigh the potential costs in this case. At the very least, any off-shore turbines should be equipped with lighting that is less hazardous, a simple solution that the industry continues to oppose.

So what’s next for this ill-conceived project? What will throwing more taxpayer money at it prove? We know it won’t go to studying its impacts on migratory birds, and certainly not towards implementing alternative design and lighting. No, instead we’ll simply continue to hear Big Wind deny the problem exists, ignoring facts and reality and having the so-called conservation organizations they sponsor regurgitate the same tired, outdated misinformation.

With another renewal of the Federal subsidies for industrial wind development in the just-passed budget, we must remain vigilant in our fight against dangerously-sited projects. It’s not about being anti-wind power. I am definitely not! But I am most definitely against putting industrial wind development projects smack dab in the middle of some of the densest concentrations of migrant birds in Maine. And Monhegan Island is just one of those places…and there are better, safer, more economical, and more efficient ways of reducing the cost of electricity on Monhegan Island, without putting the birds, and the birder economy that follows them, at risk.

For more information about the threat that poorly-sited wind power development poses to birds, and what can be done to make the industry more ecologically-friendly, please visit the “Wind Energy” page from the American Bird Conservancy.

And you think this Canada Warbler is mad now?