The count period began yesterday (Monday, 12/14), and as usual, I participated in Maine’s first count of the season, the (Southern) York County Count. This year, I was joined by Kristen Lindquist and Jeannette, covering the “Moody Territory” that covers the marshes, beaches, thickets, and neighborhoods on the east side of Route 1, between Eldridge Road in Wells and the center of downtown Ogunquit, including Moody Point and Moody Beach.

Despite temperatures well above normal in the mid-40’s, a light east wind and persistent light drizzle made for a rather raw day. However, the continuing mild temperatures also reduced the concentration of birds in the warm microclimates and dense thickets that usually make this territory so, well, fruitful (pardon the pun!). And although we had a lot of birds overall, diversity was a little below average for me, and there were fewer concentrations of birds – many species were in fairly low numbers compared to what I usually find here.

The lack of snow and ice was certainly supporting plenty of birds in this area, but they weren’t concentrated at warm edges and seasonal hotspots like they usually are. In fact, the best days on this count are when it’s clear and cold, with seasonably cold (or colder) and snowy (or snowier) days and weeks prior. Check out my report from the frigid and snowy 2013 count, for example.

We began the day as usual, with a dawn seawatch at Moody Point, with several close alcids, fairly close Black-legged Kittiwakes, and decent numbers of all of the expected overwintering waterbirds. Three small flocks of Lesser Scaup (total of 21) migrating south were a surprise. We were even more surprised to later notice that not only was this just the 5th count record of the species, but it was also the first time more than 1 had been seen! These birds are no doubt late in departing their still-unfrozen northern lakes, bays, and rivers.

Conspicuous in their absence however, was the complete dearth of Yellow-rumped Warblers (almost no bayberry crop was seen at all), and Carolina Wrens (they really did get hammered over these last two winters), but our other “feeder birds” such as Black-capped Chickadee, Tufted Titmouse, and House Finch were actually above average.

Although our birdlist and respective counts grew steadily through the day, we were lamenting the lack of rarities that this territory has become known for. Granted, the bar was pretty high. But our perception changed over the course of about 5 minutes. First, I spotted the count’s second ever Clay-colored Sparrow (on Huckleberry St, and then later relocated and photographed on Cranberry St). 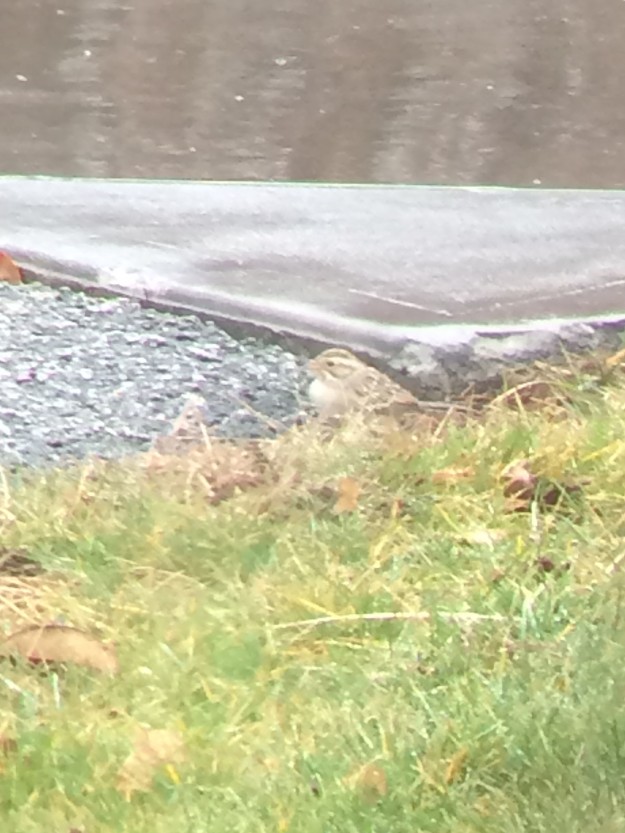 As the sparrow flew from his original spot, I spotted a Baltimore Oriole as we searched for the sparrow on Huckleberry St. This was a 5th count record. But note that my phone-binning attempt was not nearly as successful (the real cameras were in the car due to the persistent drizzle). You can kinda see it’s a bird, and there are two wingbars, and if you look really, really hard, you can just barely make out a little bit of orange on the head and chest. A little imagination will help.

We also finished the day off with a continuing Dickcissel (6th count record) that has been present for several weeks now at The Sweatshirt Shop on Route One, a perfect way to end our birding day.