Jeannette and I went in pursuit of three “good” birds in Bath on Tuesday.  We don’t “twitch” (chase a rarity) very often, and when we do, we always expect the worst.  Therefore we were shocked when not only did we get all three birds that we sought, but they all came quickly, were all photographed, and all were seen – at least at first – from the comfortable confines of our car.

In fact, one of the reasons we chose this particular endeavor this day was to avoid spending too much time out in the -20 wind chills.  Good birds, and a little warmth, made for a very good day.

First up was the Bath landfill, where a Golden Eagle has been present now for a couple of weeks.  Other than one quick late-afternoon visit in which we didn’t see the Golden, I hadn’t gotten around to visit it.  Jeannette didn’t have photos of a Golden in her library, so this seemed like a good opportunity.  And within a mere ten minutes of our arrival, the Golden – a 1-year old (first-cycle) bird – appeared from the north and circled over the landfill, harassing some Bald Eagles and causing consternation among the gulls.

We spent about a half-hour with the Golden, positioning ourselves for the best photos.  Unfortunately, when it was closest, thick clouds blocked the sun, making for backlit photos.  I think Jeannette did pretty well, however. 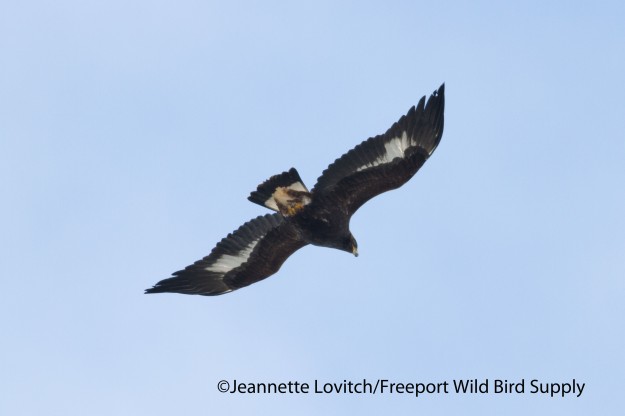 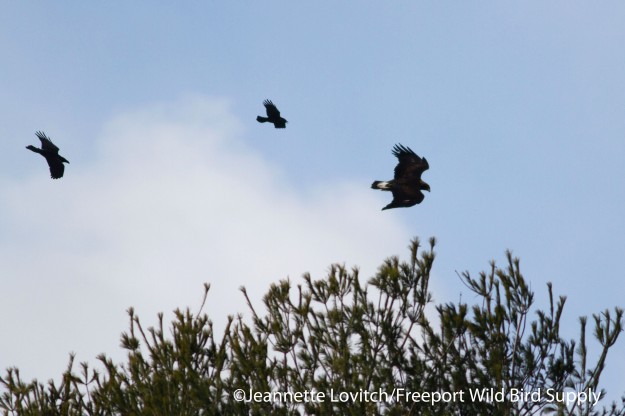 This photo is also an excellent comparison of the different size and shape of Common Raven (left) and American Crow (right), as both birds engaged in mobbing the Golden!

And we took some time to study the various ages classes of Bald Eagles, such as this 4th-cycle bird. 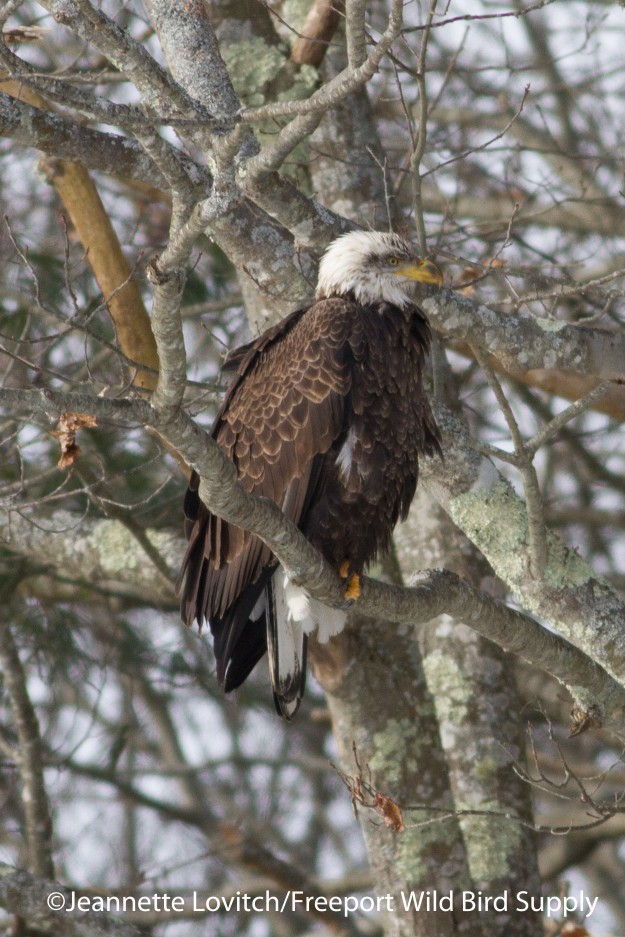 After a chilly – and not overly birdy, as expected in the woods right now – hike with Sasha down the Whiskeag Creek Trail, we pulled up to Telephone Pole #24 on Whiskeag Creek Road, where an immature Red-headed Woodpecker has been caching seed and suet.  Seconds later, the bird arrived.

We watched it for a while, flying east to a feeding station out of sight and returning with various foodstuffs to save for later.  Perhaps most interesting was the 3/4-piece of a saltine cracker that the bird jammed into a linear crack on another pole.  Not sure how well this cache will hold up to the next rain, however.

Last, and certainly not least, was a real oddity – a leucistic Black-capped Chickadee that is coming to a feeder easily visible from the road only a short distance away.  First reported by some as a Boreal Chickadee due to its brownish crown and bib, this bird is clearly a Black-capped Chickadee that is lacking melanin and other pigments.  It’s not a pure albino (lacking all pigment), but the sandy-buff body color is classic of leucistic birds – it certainly doesn’t have the gray back and peachy flanks of a Boreal Chickadee.  Also, it is the same shape and size as the Black-caps that it associates with.  Here’s a perfect example of the foible of identifying birds based on a single field mark!

The relatively dark brown cap and bib is fascinating, as it shows that the bird definitely has some melanin.   Of all of the birds that we were looking for today, this was actually the birds that I wanted to see and photograph the most!  And I was pretty excited with the shots that Jeannette scored once again. 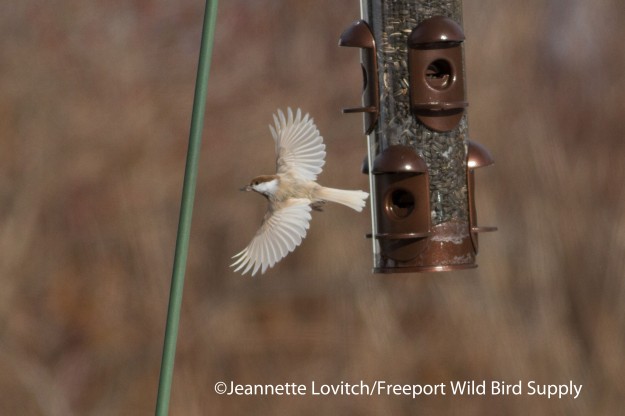 So while I most certainly prefer bird-finding over bird-chasing, a good chase now and again is never a bad thing.  Plus, it was cold out.  Really cold.  And we saw three great birds and still made it to the matinee of The Hobbit.  I’d call that a successful day!

2 thoughts on “Tuesday Twitching in Bath”