After three nights with little to no migration, birds took to the skies en masse come nightfall last night.  It was a big flight.  For examples, here are the 10pm, 1am, and 4am reflectivity and corresponding velocity images: 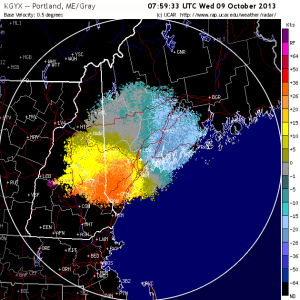 That’s a heckuva flight!  But as October goes on, more and more of the migrants are sparrows. Most sparrows (juncos and Chipping Sparrows are the exceptions) do not partake – or barely so – in the morning re-determined migration (“morning flight”), at least at Sandy Point, so I have been disappointed with the tally come dawn at Sandy Point on more than one occasion in mid-October.  While this morning’s flight was still good, it was not as busy as I would have expected based on the density of those radar returns.  But there were a lot more sparrows around in the bushes at Sandy Point and elsewhere this morning; I wonder what percentage of last night’s flight were White-throated Sparrows?

At the bridge at Sandy Point, the morning’s flight started out quite slow.  By 7:30, I had even considered packing it in and going to look for sparrows.  But then things picked up a little bit, and a steady trickle of birds slowly added up to a respectable tally.  Both kinglets spent a lot of time swirling around the point this morning (as usual, I was conservative in my count of how many were actually crossing, as many would turn around, come back, and try again), and the sparrow tally was probably a lot higher.  However, by the time I left the bridge, most White-throats had already dispersed into the woods.  Song Sparrows – which I do not attempt to tally due the number of breeding birds in the powerline cut – were definitely more abundant than they have been as well.

Afterwards, I did a circuit of the local “goose fields.” As with everywhere to our south, the resident, non-migratory population of Canada Geese is burgeoning in southern Maine.  This resident population begins to coalesce in the fields of Yarmouth, Cumberland, and Falmouth in early August, and by the middle to end of September, the flock includes a sizeable percentage of the local breeders.  The percentage of local breeders that are in the fields on any given day increases with the onset of early Canada Goose hunting season in early September.

This year, the number of geese among all fields has varied between 200-300 total birds since early September. This number of pre-migrant birds has grown steadily over the past five years in particular.  This week, the first real influx of geese arrived, presumably from some points north.  It is the flock of resident geese that know the safe fields (no hunting, less Bald Eagle activity) and travel corridors to and from the bay where they roost that attract the migrants, including those occasional rarities.

My high count this week of 445 Canada Geese today was my highest tally since the spring.  A couple of Eastern Meadowlarks and up to 8 Killdeer were also present at Thornhurst Farm this week, and Eastern Bluebirds have been rather widespread. A Pied-billed Grebe was once again in the pond on Woodville Road in Falmouth, as is often the case at this time of year.

The goose numbers and the chance for finding rarities should only increase (well, with various ebbs and flows) from now through the first heavy snow.  In fact, I often find my first “good” goose in the second week of October.  It’s also primetime for sparrows.  And this is why I hate leaving the state in October, but once again, I am off!

Early tomorrow morning I depart for Iowa, where I will be speaking at the Iowa Ornithologist Union’s Fall Meeting.  I’ll be giving the keynote presentation on “How to Be a Better Birder” using my SandyPoint case study program and I will also be showing my Russian Far East travelogue.  Finally, I will be joining the 2009 Bradbury Mountain Hawkcounter, Danny Akers, in leading a field trip.

After my weekend in the Hawkeye State, I head to Wisconsin to visit the Urban Ecology Center in Wisconsin.  In between and thereafter, I’ll be spending a couple of days birding and visiting with friends.   I’ll post the occasional update about migration in the Midwest, my birding, and other musings on my book’s Facebook page should you be interested in following my travels.

Now I am just left to wonder what state bird I will miss here in Maine while I am away (there’s always one!)