A strong, if relatively homogenous, flight passed over and through SandyPointBeach, Cousin’s Island, Yarmouth this morning.

I actually expected more juncos and especially White-throated Sparrows (at least in the parking lot, they almost never cross the water here), but the American Robin count was actually my third highest here.  The redstart, one of the first birds of the morning, was definitely unexpected – it has been several weeks since I have seen one.

Unlike Tuesday night into Wednesday, last night’s radar was unambiguous (I posted briefly about yesterday on the store’s Facebook page).  This was a solid late-season flight.  Here are the 10pm, 1am, and 4am reflectivity and velocity images for example.  You can see the rain mostly remaining well offshore. 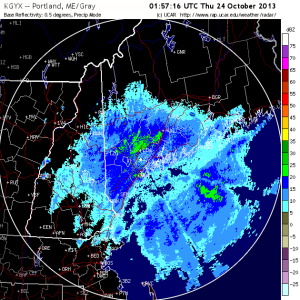 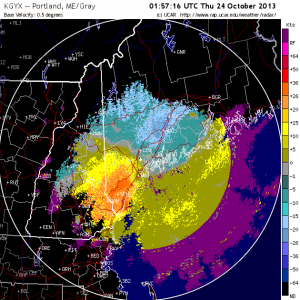 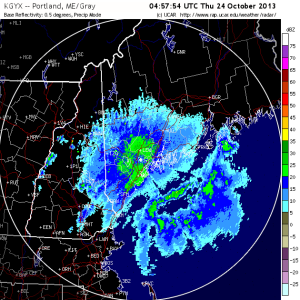 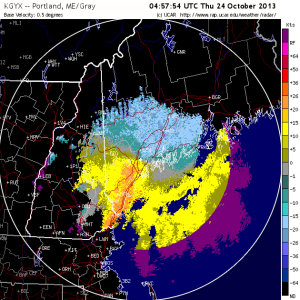 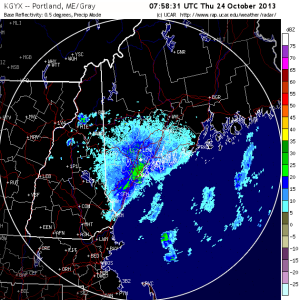 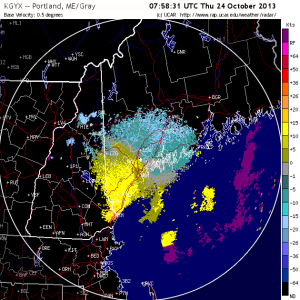 So was this my last good flight at Sandy Point?  I sure hope not, but the calendar is getting late.  There’s no doubt there is still a big push of juncos at least.  But we’ll see if the weather conditions cooperate.

Meanwhile, as SandyPoint winds down, “Rarity Season” starts to pick up.  There’s our Bell’s Vireo in Harpswell, an Ash-throated Flycatcher on Monhegan, a Pink-footed Goose that was up in The County, and the usual smattering of fun fall stuff like a White-eyed Vireo or two, a couple of juvenile Red-headed Woodpeckers, and a sprinkling of “late” birds in no doubt partially due to the mild season.  I believe there are symptoms of Rarity Fever welling up inside me!