I simply love birding Washington County, and my biennial “Washington County Weekend” van tour is little more than an excuse for me to bird the area. Of course, in doing so, I get to share the avian, scenic, and culinary glories of Downeast.  So everybody wins!

We set out from Freeport on Friday, 8/26. Not wanting to squander the entire morning just driving, we break up the trip by birding our way north. Corrina Marsh was our first stop this year, yielding Wood Ducks, side-by-side comparisons of Spotted and Solitary Sandpipers, several Ruby-throated Hummingbirds in the jewelweed, and a Northern Harrier coursing low over the marsh.

Nearby Alder Stream held multitudes of Wood and Ring-necked Ducks, along with a couple of Pied-billed Grebes. More Wood Ducks were at Plymouth Pond, along with Common Loons, but we didn’t find the Sandhill Cranes that we had hoped for.

After lunch at the flagship Dysart’s (no Maine roadtrip is complete for me without at least one grilled cheese from a Dysart’s), we strolled Essex Woods and marsh in Bangor. Four rare-so-far-inland Snowy Egrets were joined by a single Great, and we enjoyed superior views of Lesser and Greater Yellowlegs for comparison, along with more Solitary Sandpipers for comparison.

Our entrance into Washington County via The Airline was met with a bang: our first birds in the county were a migrant flock of 18 Common Nighthawks bounding overhead. Dinner, and of course, pie, from Helen’s in Machias (not to mention the blueberry sangrias!) was a sure sign we had arrived.

Without a doubt one of the best reasons for visiting this area in August is the massive congregation of gulls and seabirds, along with whales, that occurs in Head Harbor Passage, off of Eastport.  Therefore, one of the highlights of this tour is our private charter on the “Pier Pressure” for whale- and bird-watching. And this trip most definitely did not disappoint.

Sorting through 5,000-7,000 Bonparte’s Gulls finally yielded a Sabine’s Gull, a stunning adult, and one of the most sought-after species on the trip. It was nearly the end of the boat ride, my eyes were shot from combing through so many Bonies, and then I spotted it on the water, a short distance away.  It took off and joined some commuting Bonies, and we tried to follow it, but despite Captain Butch’s best efforts, we unfortunately could not keep up with it as it headed towards Maine waters, and lost it as it mingled with a large flock of Bonies. But my goodness, what a stunning species it is!

300-400 Black-legged Kittiwakes was likely a ridiculously low guesstimate, as is the goodly 200+ Razorbills. Although Razorbills are regular in the passage in most summers, the numbers this year have been exceptional. Scattered Great Cormorants among the multitudes of Double-cresteds, plenty of Black Guillemots, about a dozen tarrying Common Terns, and a total of 15+ Bald Eagles added to the show. A total at of 5 Lesser Black-backed Gulls of various ages were detected, but I admit to not sifting through every large gull – it was the rare “hooded” gulls that we were on the lookout for! 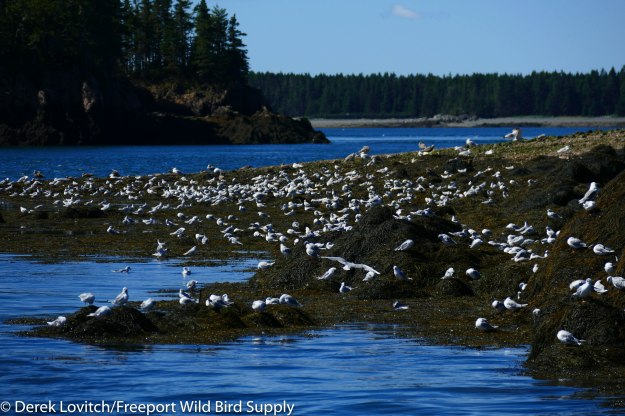 Lots and Lots of Bonaparte’s Gulls (and Black-legged Kittiwakes). 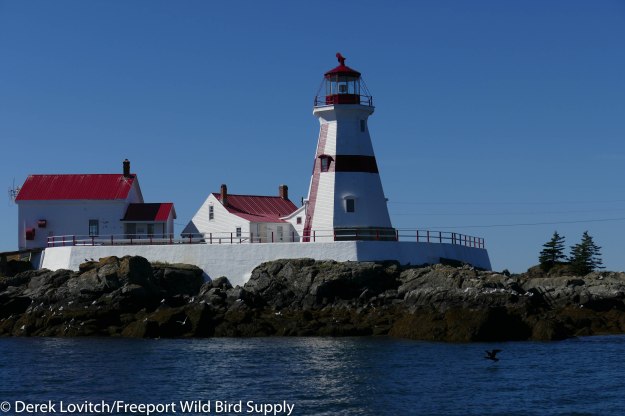 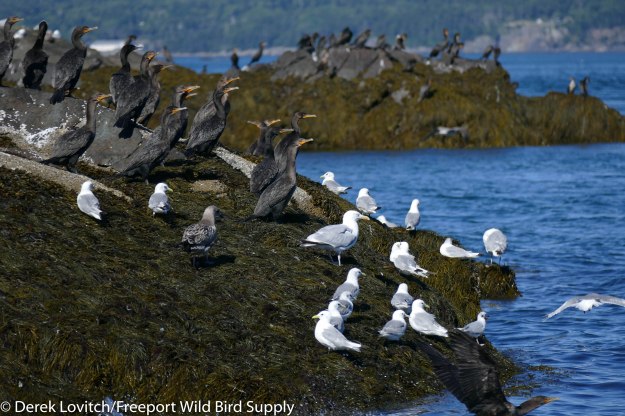 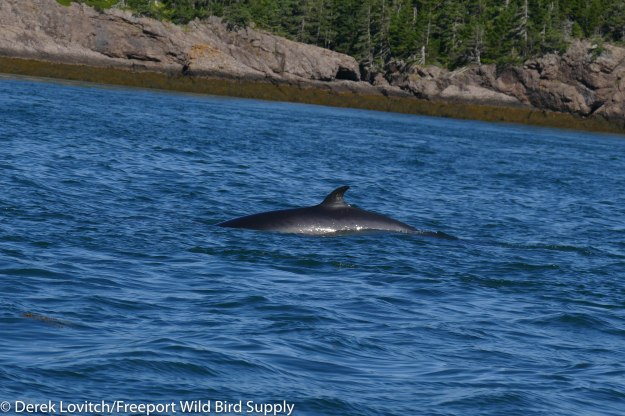 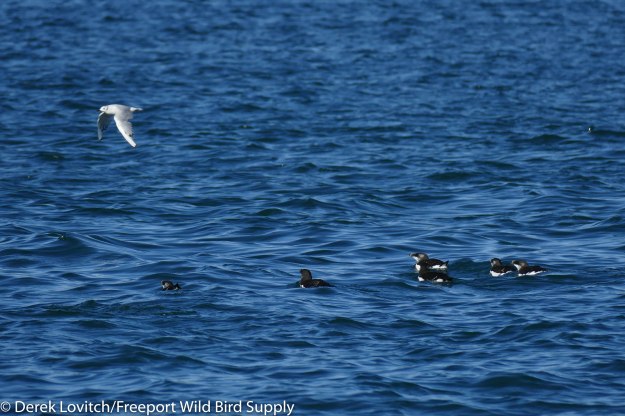 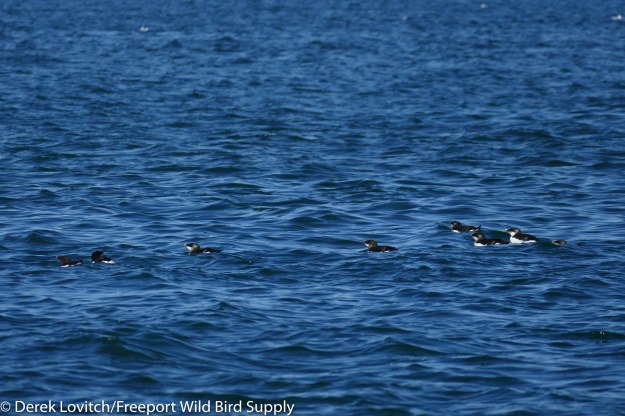 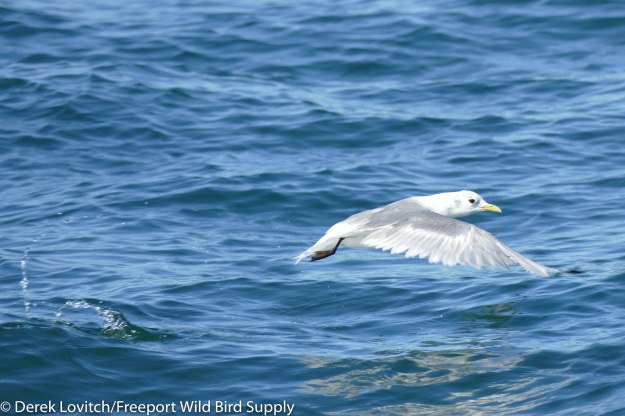 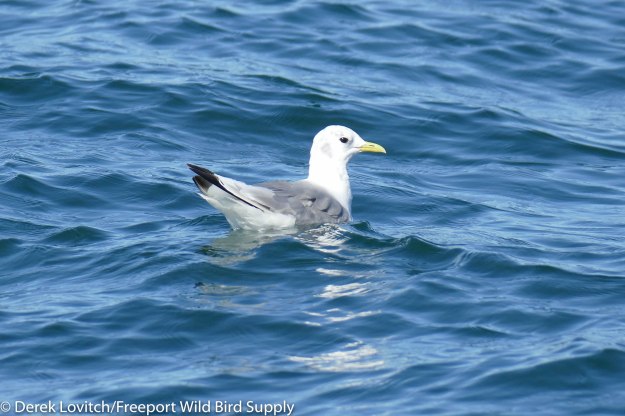 Harbor Seals and Harbor Porpoises were common, and we visited with some massive Gray Seals as well. We spotted a single Minke Whale, and then drifted with a massive Fin Whale for a little while. 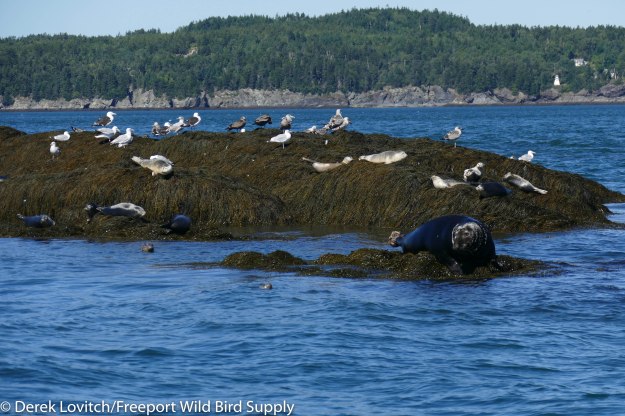 While we only has one fly-by unidentified phalarope and did not find a single tubenose (despite spending some time off of East Quoddy Head), the trip was an incredible success, because, well…Sabine’s Gull!

We fueled up on arguably the best lobster rolls in the state at the Quoddy Bay Lobster Company, before spending some time seawatching at the end of Clark St (hoping for the Sabine’s to reappear!). Close-up kittiwakes and Bonaparte’s Gulls were nice, as were a couple more Lesser Black-backed Gulls. However, it was the molting adult Black-headed Gull that was the welcomed consolation prize. 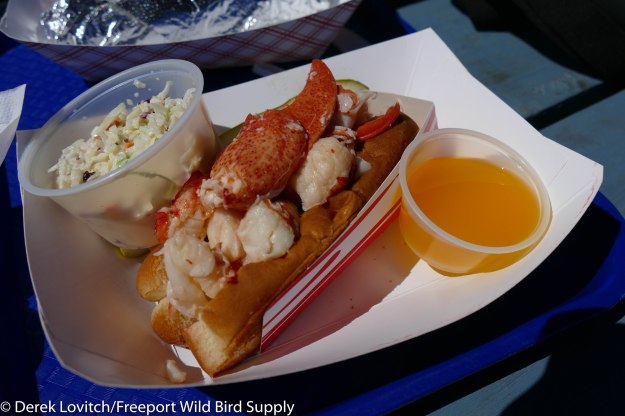 We slowly worked our way up the peninsula, checking out various viewpoints, and seeing a smattering of shorebirds and lots of Black Guillemots in the process. Finally, at the Sipayik Trail at the ballfields at Pleasant Point, a nice mix of birds as always included a trio of out-of-place Sanderlings, a few Bobolinks, more Bonaparte’s Gulls and Black-legged Kittiwakes offshore, and 2 Nelson’s Sparrows in the marsh. Another close Northern Harrier coursing low over marsh stirred the pot, kicking up more Green-winged Teal and Least Sandpipers than we thought were present.

Dinner at the Hansom House in Dennysville left much of the group speechless. It is a very interesting, and very different place indeed!

Day 3 found us making an even earlier start, but we were rewarded with our efforts with a dapper male Spruce Grouse doing its thing in the trail at Boot Head Preserve in Lubec. 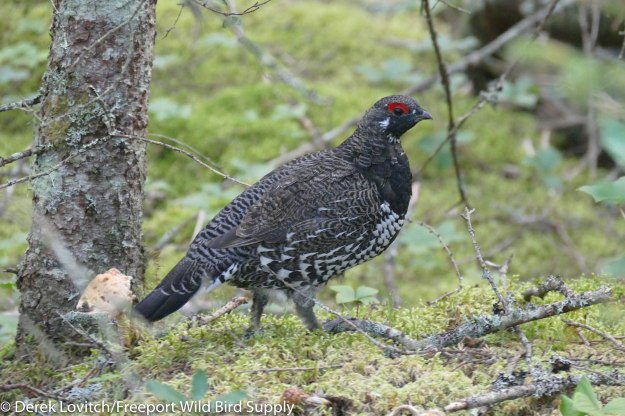 Following that success, some edge- and sky-watching at the bog there yielded fly-over Red Crossbills (2+), 3 Pine Siskins, and among the scattered warblers in small flocks working the edge, at least 6 Palm Warblers (local breeders).  We also began to truly get a sense for just how incredibly abundant Red-breasted Nuthatches are in the forests around here right now – undoubtedly portending a great finch winter to come!

Our Lubec-area day continued with a stroll at Quoddy State Park, where Red-breasted Nuthatches were once again downright deafening. At least 4 Red and 3+ White-winged Crossbills were detected, and we spotted a Philadelphia Vireo within one of the mixed flocks around the edge of the bog. There, we also took time to enjoy the plants of this fascinating habitat, including carnivorous Pitcher Plants and the two species of sundews.

Our busy and productive morning continued at the Lubec Bar and Flats, where a large number of shorebirds had aggregated. Although it has apparently been slow here recently, we found a rather decent number and diversity of shorebirds. I do wish we were arrived about a half hour earlier, and had about an hour more time here, however!  About 1500 Semipalmated Sandpipers and 250+ Least Sandpipers were joined by 75-100 Sanderlings (a surprisingly high count for here), 60-80 Black-bellied Plovers, a handful of Semipalmated Plovers, 1 Ruddy Turnstone, and 1 Whimbrel.

Lunch at Cohill’s was a hit. In fact, the Shepherd’s Pie turned out to be the favorite meal of the trip for two people, although I was quite over-satisfied with my “Drunken Potato” with Guinness gravy and cheese curds.

Following the obligate stop at Monica’s Chocolates – where we left with the cooler overflowing! – we headed back to Quoddy State Park for some relaxing sea-watching. In 1.5 hours, we tallied at least 14 Sooty Shearwaters (making up for the lack of them on our boat trip), counted 10 juvenile Laughing Gulls (they seemed unusually frequent up here this year, and of course, we tried to string each of them into a jaeger!), picked out a few Razorbills, and spotted two Northern Gannets, and excitingly, two Atlantic Puffins. A few more Great Cormorants and a dozen Black-legged Kittiwakes were noted, for those who hadn’t yet gotten their fill. 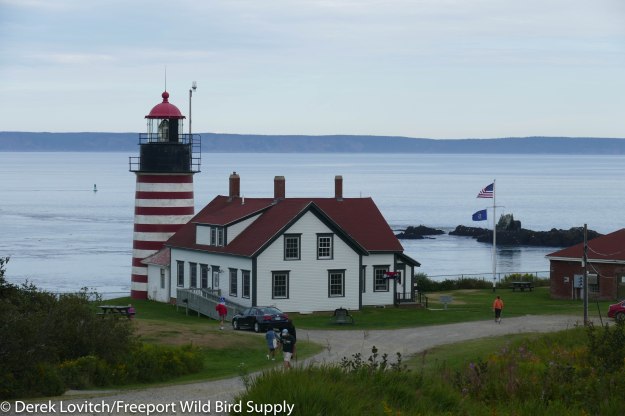 Scanning the flats again, but this time from the roadside, we finally picked up a single White-rumped Sandpiper, increased our tally to 6 Short-billed Dowitchers, and otherwise improved on our looks at the other species from earlier. 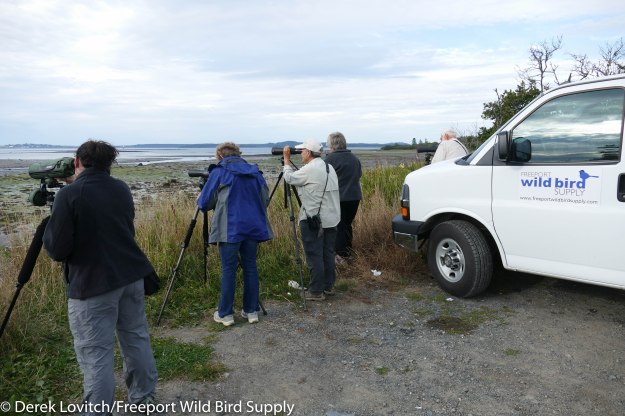 While Pike’s Puddle was nearly dry and devoid of birds, the beach on the other side of the road yielded a juvenile Baird’s Sandpiper. That was cause for celebration enough, but the show was stolen when a Merlin came out of nowhere and nabbed an unsuspecting Semipalmated Plover. That’s a hearty meal for even a female Merlin, so after quickly dispatching it, she struggled to drag it across the rocky beach before finally taking off and disappearing into the trees to have her dinner. 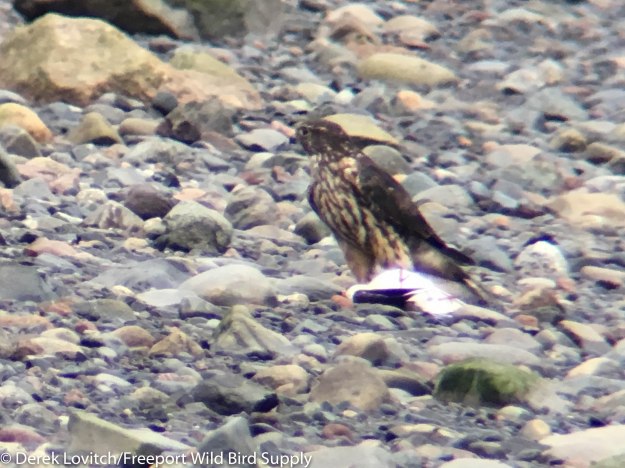 Phone-scoped documention of the Baird’s Sandpiper

As did we…and no Derek Lovitch tour is complete without a brewery, apparently, so our evening’s destination simply had to be the new Lubec Brewing Co!

No visit, tour or otherwise, gives me enough time to bird this area. This four-day weekend is truly just a sample, and despite my interests in going back to the Lubec flats or the Eastport gulls, after two long days of jam-packed birding, we began our day (after a leisurely breakfast at Helen’s) simply by watching the shorebirds behind our motel.  606 Semipalmated Sandpipers, 41 Semipalmated Plovers, 20-30 Least Sandpipers, and another out-of-place-on-mud Sanderling surpassed expectations.

I like to slowly mosey back home, and I like to mix in a new site or two on each tour. Therefore, instead of racing east only to start the drive back west, I decided to do some exploring, beginning with the Mason Bay Conservation Area on the Jonesboro/Jonesport border.  More Red-breasted Nuthatches and a couple of mixed species foraging flocks were indication that this is a spot worth checking in the breeding season, and at the end of our stroll (which included some more botanizing, a few butterflies, and fun with Tent Caterpillars) another Red Crossbill passed overhead.

A typical stop for me when taking Route One back towards Ellsworth is Addison Marsh. Although we arrived at high tide and the productive mudflats and river edge were no longer visible, the salt pannes provided some entertainment. Although diversity was low, we could not have asked for more enjoyable views of a mixed flock of Least and Semipalmated Sandpipers. A couple of Solitary Sandpipers and a Greater Yellowlegs passed overhead, and a couple more Northern Harriers and Bald Eagles, along with three migrant Ospreys, stirred the pot.

A great opportunity to compare Least and Semipalmated (center) Sandpipers.

Exploring access points to scan Flat Bay in Harrington, we found some shorebirds here and there as the ride finally started to go out. As shorebirds were appearing off of Oak Point, I realized lunchtime was approaching, and I decided to get back into the van before I spent the next three hours making everyone (myself most definitely included) starve as I sorted through shorebirds. Besides, a rapidly increasing northwesterly wind was making it challenging to see any birds in the distance (our first experience with anything other than perfect weather all weekend!).

But to be honest, most of that exploring was just to put us in position for Vazquez Mexican Takeout in Millbridge for lunch (second only to Helen’s pie as sought-after “twitches” for this tour!). I ate too much, as usual. Actually, gluttony was a regular theme of this tour, as many of us were forced to roll out of many of our meals. Apparently, we were all single-handedly trying to jumpstart the region’s economy with our consumption! 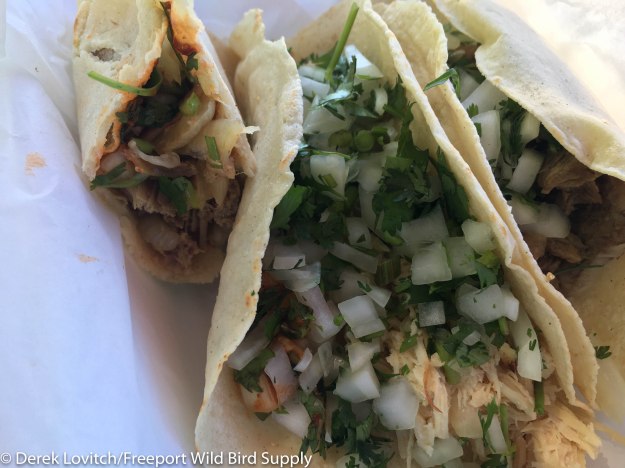 A quick check of Hog Bay was thwarted by the increasing winds, and that was a sign it was time to begrudgingly bring our birding to an end and make our way back home. From Sabine’s Gulls to Spruce Grouse, from thousands of Bonaparte’s Gulls to hundreds of Red-breasted Nuthatches, from blueberry pie to “tacos as good as in McAllen, Texas” (according to one of our transplanted participants), and from pitcher plants to Fin Whales, there is no doubt that I will be looking forward to my next tour to this awesome area!  In fact, one participant on this year’s tour has already signed up for 2018. That should tell you something!