Jeannette and I took our annual pre-Bradbury Mountain Hawkwatch (starts on Wednesday!) roadtrip this year to Buffalo and Niagara Falls.  We went to Buffalo on a pilgrimage to visit the Anchor Bar – the birthplace of the Buffalo Wing. And we spent the rest of the time in the gull-watching Mecca of Niagara Falls.

On our first day at Niagara, wind gusts over 60mph were ripping over the falls (the local airport recorded a gust of 72 mph!) and birding was brutal at best, but essentially impossible (at least for a vacation). We spent a couple of hours in Niagara Falls State Park, but although it looked pretty that day, it was a day to go to the Anchor Bar! We also checked out the Olmstead-designed Delaware Park while in the big city. 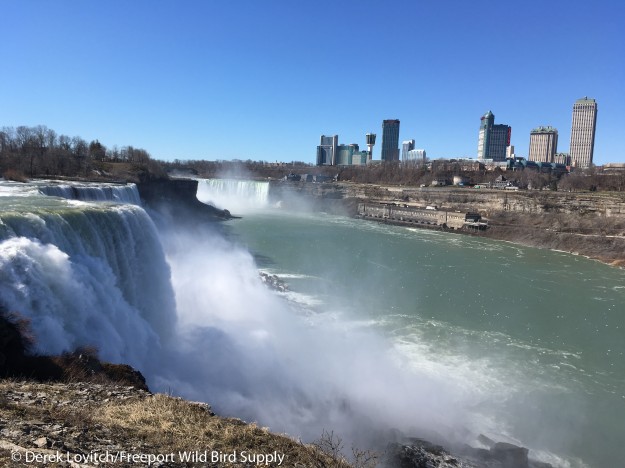 The next day (Thursday, 3/9) it was quite a bit colder, but the winds were “only” 15-25mph. It was far from pleasant, but it was most definitely bird-able! And the birding was very good!

Despite the relatively late date for the peak of “winter” gulling here (despite what it felt like), we sorted through the many thousands of gulls (predominately Herring and Ring-billed, with a small number of Great Black-backed) and conservatively estimated at least 31 Iceland Gulls, 23 Lesser Black-backed Gulls, and 8 Glaucous Gulls in and around Goat Island alone. 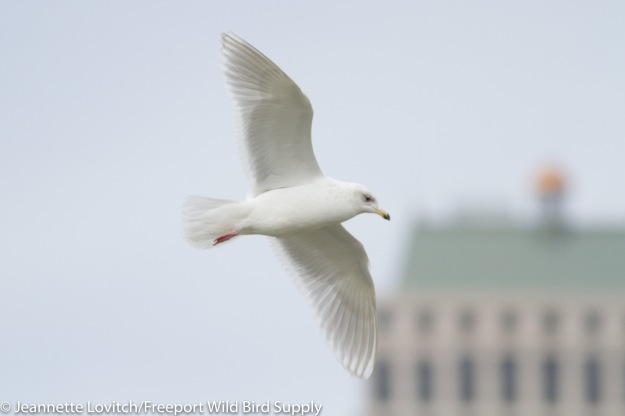 And then there was this one:

I identified it as a possible or “putative” Laughing Gull x Ring-billed Gull hybrid on account of several features:
– near-complete blackish hood with smudgy white around the eye.
– mantle was 1-2 shades darker than the surrounding Ring-billed Gulls.
– overall size and structure was comparable to Ring-billed Gulls, and didn’t bring one of the smaller hooded gulls to mind.
– large white apical spots on the outer primaries.
– dark orange bill with a blackish band, slightly smaller and thinner than nearby Ring-bills.
– yellow-orange legs

And frankly, it looked a lot like photos I have seen of this presumed pairing, such as this one from Amar Ayyash in Chicago.

Jeannette photographed it and we moved on. We never felt a need to flush it, and the bird clearly was not going to raise its wings on its own for us! But feeling the identification was solid, we enjoyed it, left it alone, and went on our way (perhaps we were simply being ultra-conservative about disturbance after the Great Gray Owl debacles this winter!)

A few minutes later, we ran into another birder, and alerted him to our find. He saw it, got some photos, came back to chat, and then went back to the bird. We continued to bird our way around the island.

I knew I needed to take a look at the photos on the computer, and do some homework. A couple of things really bothered me.  But before I had a chance to study the photos and re-evaluate my initial ID, chatter broke out on the area’s birding listserve. Chris Kundl was the birder we met, and he went back and spent some quality time with the bird, extensively photographing the wing pattern, which we – unforgivably!- did not. He, and several other local birders, then identified it as a (rarer) Black-headed Gull x Ring-billed Gull hybrid, based on the extensive white in the wingtips and the white leading edge to the wing. (His photos are here)

Kevin McGowan posted a link to a basic-plumaged individual of this presumed combination, and it definitely looks similar.

However, as Shai Mitra then pointed out on the listserve, a few things are a bit off for that combination. “(T)o me, this bird looks so unlike a Black-headed Gull that I remain puzzled. Specifically, it looks large, thick-necked, large-headed, broad-winged, and heavy-billed. Black-headed Gull is only half the mass of a Ring-billed Gull and very differently shaped, whereas this bird looks quite similar to Ring-billed Gull in overall size and structure. It is of course possible for hybrids to tilt toward one parent or the other in various ways, as opposed to showing intermediacy, but note that the Sullivan County bird from 2002 showed much more intermediacy in these very features (e.g., more obvious influence of Black-headed Gull in terms of size and shape). Looking more closely at the plumage, I also note that the hood seems to lack any of the brownish tones usually evident in Black-headed Gull, and that the mantle appears subtly darker than those of Ring-billed Gulls (Black-headed Gull is notably pale-mantled).”

The size, structure, shape, blackish (not brownish) hood, and darker mantle was what led me to the call of Laughing x Ring-billed. But how else does one explain that white leading edge to the wing? And the extensive white on the outer primaries? A hybrid Bonaparte’s Gull would explain that (and the black tone of the hood), but that’s even smaller and daintier gull than Black-headed.

So what does this mean? Simply: I don’t know. My initial ID does not explain the wing pattern, and that really bothers me.  So what is this? It looks like I have some more homework to do – and I will be sending this blog around to gather additional insight. I also want to look up when the various hooded gulls acquire their alternate plumage, as this seems incredibly early for a hooded gull to be hooded. Keeping in mind that not all hybrids are perfectly intermediate, that backcrosses occur, and that it’s hard to “prove” parentage, I think this bird is worthy of a little more debate.

Of course, we looked at everything else during our visit, including a couple of Harlequin Ducks off Goat Island, and goodly numbers of a wide variety of ducks (especially Common Goldeneyes, Red-breasted Mergansers, and Buffleheads) at a number of locations. And later, we finally caught up with a “as good as they get” Thayer’s Gull – a spiffy adult at Devil’s Hole State Park (after passing on labeling a couple as such at Goat Island earlier in the day).

The Niagara River Gorge and the Whirlpool from Whirlpool State Park. 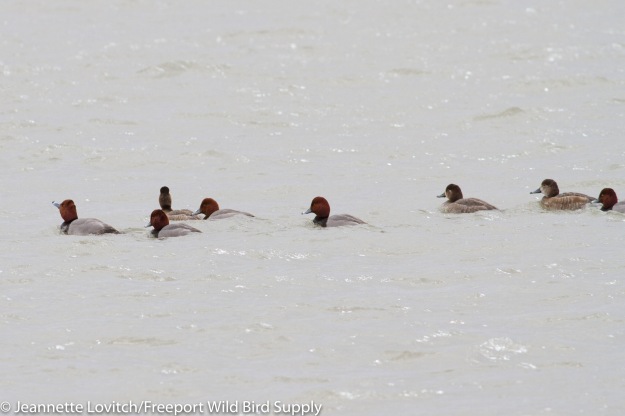 Unfortunately, it was already time to head home on Friday, so after another walk around Niagara Falls State Park, we began the trek eastward, birding Iroquois National Wildlife Refuge. Unfortunately, the winds were very strong once again and our time was limited, but we thoroughly enjoyed the hundreds of Tundra Swans (it’s been a while since we’ve seen any!), good numbers of many ducks especially Ring-necked, and sorted through many thousands of Canada Geese at the refuge and nearby cornfields (13 Cackling Geese in Gypsum Pond were our only non-Canadas, unfortunately) before beginning the long drive home (made much longer by snow squalls and that darn Norlun trough that set up over southern Maine!).

Our time was far too limited, as always, but it’s time to get ready to count some hawks!  And at least we still have this gull to mull over.