Well, it’s finally cold out! And snowy. Yeah, winter is here, and with it, I expect some hot birding!

After a fairly slow start to the Rarity Season, as I recounted in my last blog, November continued to be slow. A Cattle Egret continued in Pittson through 11/22, and the long-staying Marbled Godwit surprisingly (and rather incredibly) continued through at least 12/4.  Meanwhile, the usual smattering of otherwise “late” rare-but-regular birds were spotted here and there like Yellow-breasted Chats and Dickcissels.

Once it finally got a little colder, a little snow and ice fell (especially to our north and west), and natural food sources became harder to find, excitement finally began to pick up a little. With warm coastal microclimates and pockets of seasonally abundant food finally starting to concentrate birds, a few goodies began to turn up -just not as many as there should have been. In fact, it was not a very good second half of November, as far as second halves of November usually go.

As usual, I combed my favorite haunts, with several visits to my favorite late fall/early winter hot (pun intended) spots, including the Saco Riverwalk, patches in Cape Elizabeth and Harpswell, etc. In doing so, I found quite a few late/lingering/pioneering/stuck birds such as a Common Yellowthroat and a Winter Wren at Kettle Cove on 11/27; a male Wilson’s Warbler and 2 Ruby-crowned Kinglets in the remaining un-clear-cut woods at the western end of the Eastern Promenade in Portland on 11/27; a Wood Duck at Old Town House Park in North Yarmouth on 12/1; 2 Northern Flickers and a Double-crested Cormorant along the Saco Riverwalk on 12/2; an incredible Saturday Morning Birdwalk on 12/3 that yielded Red-shouldered Hawk, Black-bellied Plovers, a hen American Wigeon, along with Ruddy Turnstones and Purple Sandpipers; a female Wilson’s Warbler on Bailey Island on 12/4; plus a Hermit Thrush in our Pownal yard on 12/5; as well as the usual smattering of Swamp Sparrows and a few Chipping Sparrows here and there. 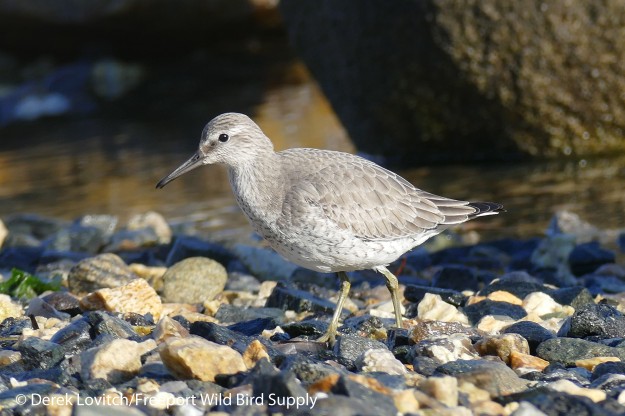 Rather unexpected considering the date, location, and especially the insanely confiding behavior, this Red Knot was at Wharton Point in Brunswick on 12/1 as I spent the morning guiding for a client from Maine interested in learning the local winter hotspots.

Shockingly, however, despite combing the coast from Kittery through Wells all day on 11/28, Jeannette and I didn’t turn up a single thing out of the ordinary – it might have just still been too warm to concentrate birds in Maine’s “banana belt.” With temperatures in the mid to upper 40’s for several days at the end of November into early December, our wait for real cold weather continued.

Same was true as I thoroughly birded the greater Biddeford Pool area from the Saco Riverwalk through Timber Point on December 2nd with good friends Barbara Carlson and Paul Lehman visiting from California. We enjoyed some good birding, led by this Pacific Loon we found of East Point, but nothing unseasonably “lingering.” 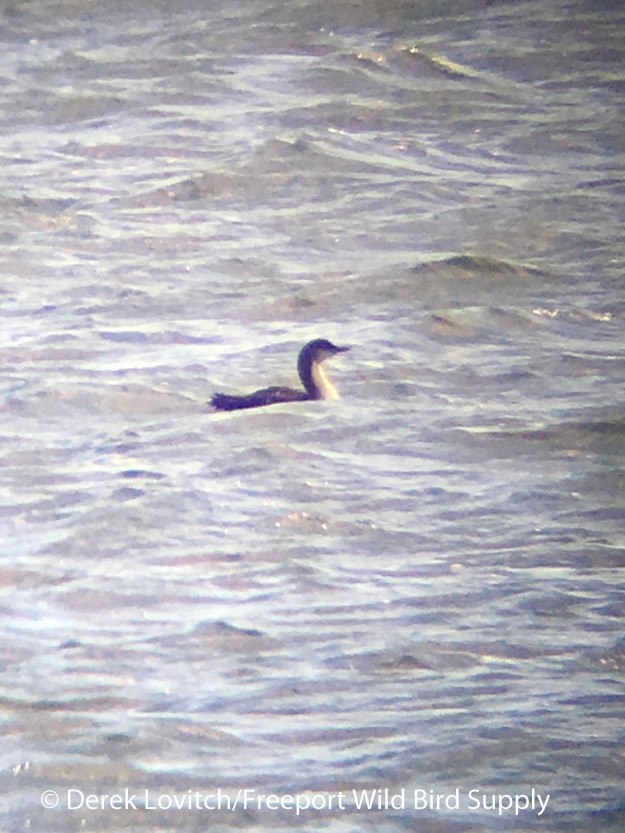 This heavily-cropped phone-scoped photo shows the rounded head, dark back and hindneck, small straight bill, and even the narrow chinstrap (not always present or visible) of the Pacific Loon. It was also much smaller than nearby Common Loons, as well as darker and with a different profile from the Red-throated Loons also present.

Paul and Barbara had been birding their way from New Jersey, and the same refrain was heard everywhere: “it’s slow.” The coastal thickets, migrant traps, and other seasonable hotspots are just not what they usually are this time of year. Although there are a smattering of rarities here and there, it’s just not that “good” right now overall. At the very least, I know we’re not alone here in Maine!

Trying things further afield, Evan Obercian, Jeannette, and I scoured the Belfast area on the 6th. Unfortunately, the only bird of note we turned up was a single Ruby-crowned Kinglet in East Belfast. 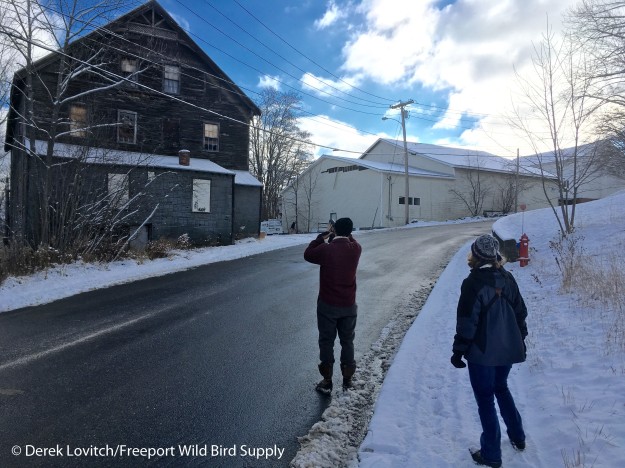 However, well-stocked feeding stations have became a bit of a hotspot, as they often do at this time of year. “Feeder Rarity Season” began with a one-evening wonder Harris’s Sparrow in Central Maine on November 18th. Four days later, a Bullock’s Oriole showed up at a feeder in Camden and stayed through at least 12/3. Luke Seitz and I drove up to successfully twitch it on Black(bib) Friday – my 374th species in Maine! 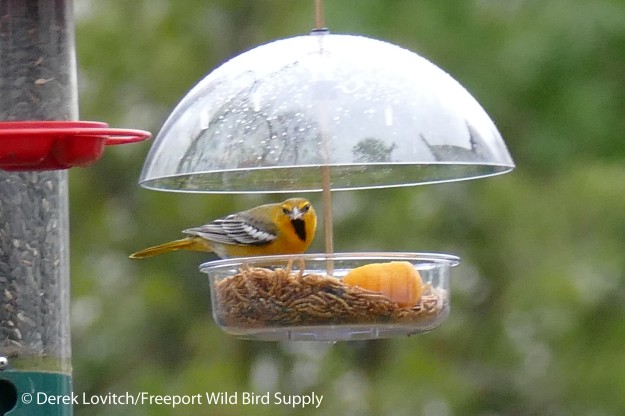 Two Dickcissels continue at a feeder in Clinton, but a female Black-throated Blue Warbler coming into a feeder in Portland was perhaps the most unexpected of all.

Other recent, more-seasonal highlights for me included a Northern Shoveler amongst 13 species of waterfowl at Sanford Lagoons on 11/22; 24 American Coots at Chickawaukie Pond in Rockland/Rockport on 11/25; a Rough-legged Hawk over Richmond Island from Kettle Cove on 11/27; a continuing American Coot at Fortune’s Rocks Beach on 12/2; and the “Blue” Snow Goose continues in the Greater Yarmouth Goose Fields through last week. Jeannette and I also had a great visit to Sabattus Pond before the snow began to fall on 12/5, tallying an excellent late-season total of 16 species of waterfowl despite the pond being about half covered with a thin layer of ice. A rare-inland female Long-tailed Duck, 3 Gadwall, 1 drake American Wigeon, a pair of Northern Pintails, 21 Green-winged Teal, 1 Ring-necked Duck, and 73 remaining Ruddy Ducks were among the highlights.

Finches continue to trickle in and through, with scattered Evening Grosbeaks and Red Crossbills over the past couple of weeks. And some more birds of the season included all the fun stuff like Harlequin Ducks and Purple Sandpipers along the coast, Snow Buntings scattered about, etc.

So, although we lament what the season has yet to bring – for example, I’ve only had twospecies of warblers (Yellow-rumped and Wilson’s) so far this December compared to the insane total of 10 that I accumulated in December of 2015 – there really is never a “bad” season of birding here in Maine! It’s just that our expectations are elevated at this time of year.

But now it’s cold. And snowy. That should finally push birds to the coastal microclimates and migrant traps. And in less than 2 weeks, Christmas Bird Counts get underway, believe it or not, and hopefully a return to more seasonably cold weather will turn up the heat on the birding season!