I’ve been feeling the gravitational pull into the boreal forest recently. No longer able to resist, and finding a way to make another hole in my schedule, Evan Obercian and I made a rather impromptu trip north this weekend, heading to one of the most incredible areas of the state. It’s been way too long since I have visited Baxter State Park – the “crown jewel of Maine” – and the surrounding boreal-transition habitats.

We definitely had a target bird for this trip: American Three-toed Woodpecker. However, this was really just the excuse to spend a few days birding together, exploring an area Evan hasn’t been too, and enjoying the area that I don’t get to nearly enough. And camping.

We hit the road on Sunday morning, not exactly early, making it to Lincoln in time for the quintessential Maine road trip lunch: Dysart’s. Driving through rain, with more rain in the forecast, we wondered about whether or not this trip was really the best idea. But by the time we arrived at Harvester Road just before 3pm, it was mostly sunny, warm but breezy, but of course rather quiet: it was the afternoon in the middle of July after all. 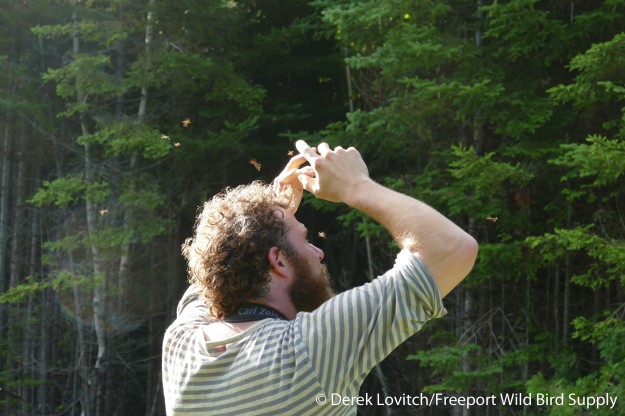 We admittedly did only a modicum of research as to where three-toed woodpeckers had been reported from recently, so used that as a guide for our stops, if only for reconnaissance. Olive-sided Flycatchers were particularly vocal and conspicuous, and encountered one Fox Sparrow. Other “boreal specialties” included 3 Palm and 2 Wilson’s Warblers, and 2 each of Yellow-bellied Flycatchers.

In the heat of the afternoon, we looked at more “bugs” than birds, such as lots of Aphrodite Fritillaries… 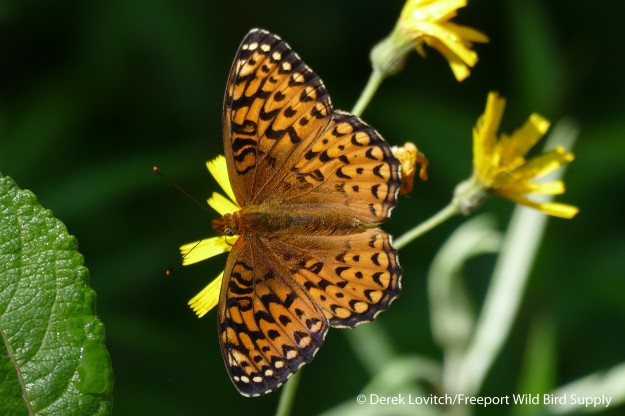 …But at our last stop at a particular prime looking woodpecker spot, we did enjoy great views of a Black-backed Woodpecker – a very good sign.

A thunderstorm kindly missed our campsite…

..and we stayed up way too late listening to Common Nighthawks and a lone American Woodcock give way to a chorus of 3-4 Eastern Whip-poor-wills.

Come dawn, dense fog and dueting Common Loons precluded the desire to get out of the sleeping bags. The vociferous “whip” at 4:00am didn’t help, either, as welcome as its song was. As we ate a leisurely breakfast, the fog lifted. 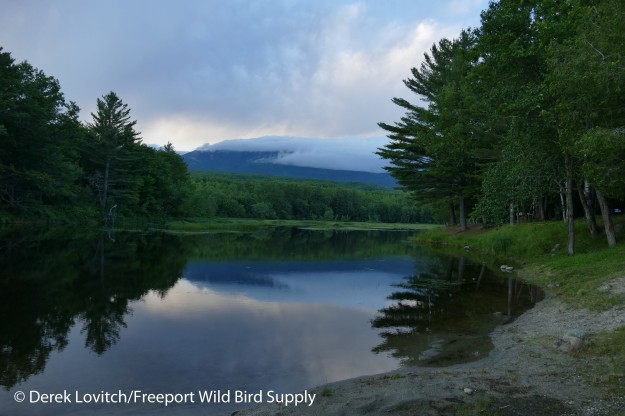 Once again, however, we realized we were vacationing more than birding, and it was already 9:00 when we entered Baxter State Park. Making a bee-line for the Nesowadnahunk area, we took the Tote Road, and not stopping until we hit the best boreal-transition habitat in the stretch of road north of the Nesowadnahunk Field Campground.

A couple of Gray Jays made their presence known, we spotted a molting Bay-breasted Warbler or two, but possible woodpecker habitat was in short supply.

We continued to explore, and the combination from the recommendations of a friend (thanks, Luke!) and an unrelated tip from a park ranger, led us to unmarked trail that lead us to Nesowadnahunk Lake and the adjacent campground.

Besides the view, a few “trip birds” on the water, and a cold drink, we finally put together vague sightings reports to figure out that some of the summer’s American Three-toed Woodpecker reports were from this road to THIS campground. Of course, it was the mid-afternoon, and it was now the worst time of day at the worst time of the summer to find secretive boreal woodpeckers!

But we had a plan for the morning now, and although we hustled back to the car with an approaching thunderstorm, we had renewed optimism for our search.

We worked our way back south on the Tote Road, spending a couple of hours casually birding in the trails of the Tracey-Elbow-Grassy Pond area. A pair of Boreal Chickadees, a couple of family groups of Ruby-crowned Kinglets, and plenty of Yellow-bellied Flycatchers were seen and heard, while Grassy Pond hosted 16 Ring-necked Ducks and 5 Common Goldeneyes.

Mostly, however, we studied plants, insects, and other general nature observation. Stunning Ebony Jewelwings were everywhere…

…and we learned what a gorgeous damselfly the Variable Dancer was.

Of course we continued to look for birds, and Evan tried creatively to get a closer look at a family group of Red-breasted Nuthatches… 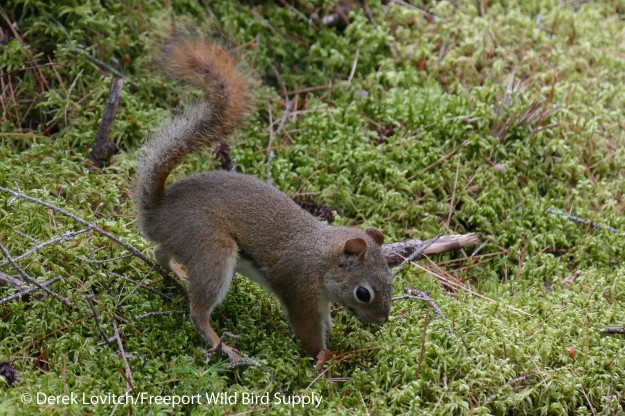 …but perhaps this is why we haven’t been seeing many woodpeckers! 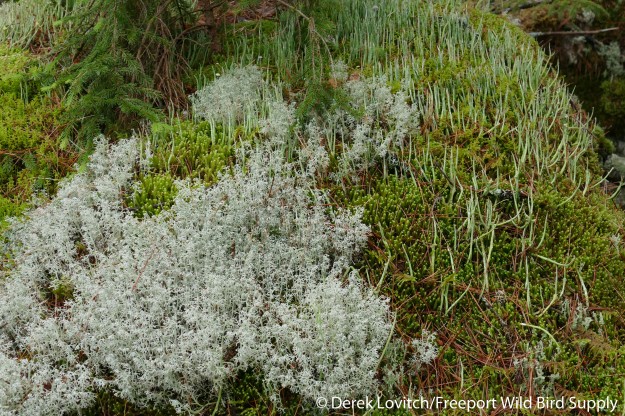 We offered advice to a hiker who was making the rather-tame bug situation much worse for herself, changed a tire from a tourist clearly out of her element, and gave a lift to two guys who might have been off a little more than they can chew on their day hike. As we left the park, we were feeling pretty good about having built up some good karma for the next day’s dedicated (and less lazy!) effort to see a three-toed woodpecker!  When the two guys tried to give us some money for the lift, we of course refused, as I said something like “return the favor someday.”  We had no idea how soon we would need such favors.

Back at our campsite at the Abol Bridge Campground (our last-minute trip precluded any chance of getting a site in the park, plus we wanted to stay between the park and the Telos Road area), we spent some time photographing the pair of loons in the river/pond behind our tent. 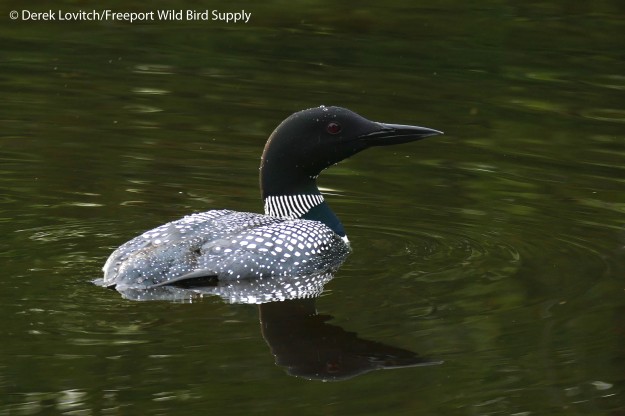 And then Evan prepared dinner…local (from Lincolnville) Belted Galloway steaks and wild-foraged chanterelles (earlier, Evan yelled for me to “stop” while we were driving. I thought he just saw a woodpecker, or a ghost. Nope, he saw mushrooms). 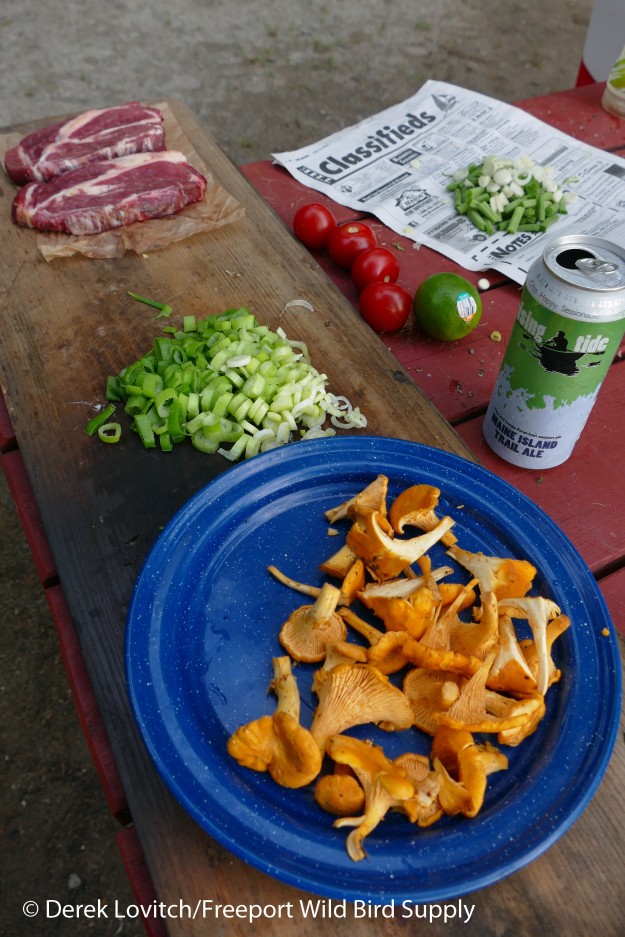 Although we were still sans American Three-toed Woodpecker(s), we had a great day, and the sunset was the icing on the cake!

On the morning of our last day, we some how struggled out of the campground before even coffee, focused on seeing the woodpecker. We decided to first try the spot along the entrance road to the Nesowadnahunk Campground (not to be confused with the Nesowadnahunk FIELD Campground in the park) via Telos Road.

Stomping around the edges of a clearcut and bog for a while, it was beginning to feel hopeless, and we decided to stop at the campground for a cup of coffee, before heading further up Telos Road to renew our search in the promising spot off Harvester Road.

However, I noticed a diffuse trail on an old skidder track; almost exactly at the posted milemarker 6 (which was the only specific location given in the handful of vague eBird reports). We walked all of about 30 yards when this happened: 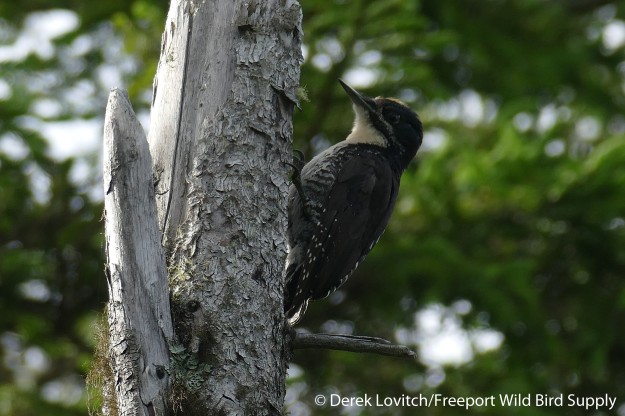 I am fairly sure a second bird we saw briefly was a juvenile, being fed by the male. We followed the male for a while, taking hundreds of photos, while basking in the glory of our success (my 372nd bird in Maine and #1 for about the fourth year in a row on my Predictions List of my next personal State Birds) and in the glory that is the enigmatic American Three-toed Woodpecker. 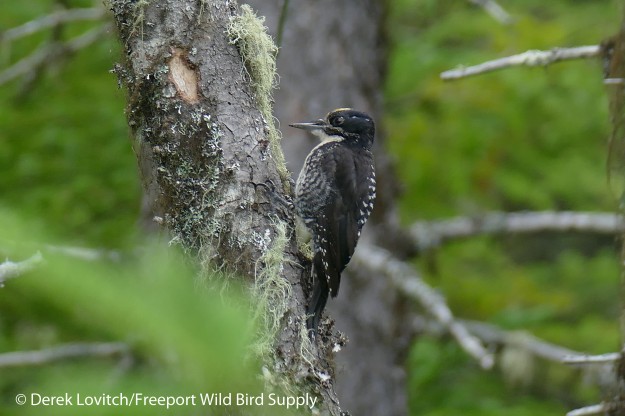 We then found the female, and watched and photographed her for a while.

One Red Crossbill – our only non-Purple finch of the trip – passed overhead, but we barely looked up.

Happy that we were successful in our search, we hatched a plan to casually bird and explore for the rest of the day, stopping to photograph bugs and abundant Snowshoe Hares. 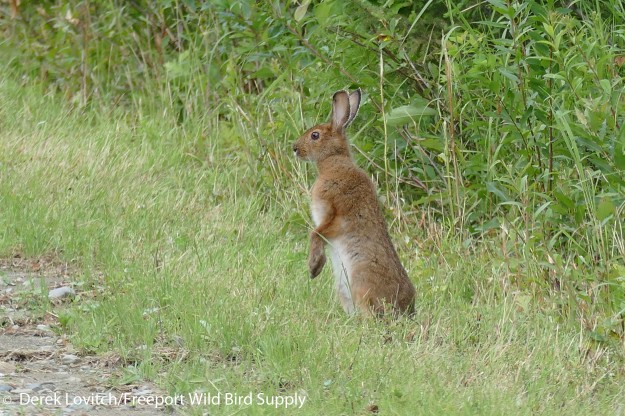 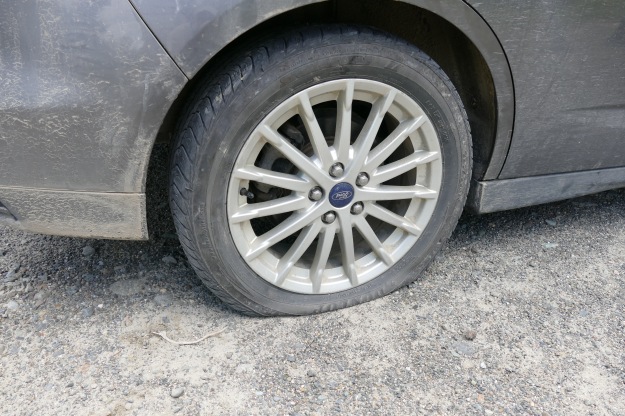 So….my car, like a lot of new cars, especially hybrids, comes with a pump and canister of fix-a-flat instead of a spare or a donut. Unfortunately, the canister of goo attached to the pump didn’t work.

The roads up here are notorious for shredding tires, thanks to the underlying flint bedrock that occasionally chips and breaks into upright daggers, aimed perfectly for taking on even the heaviest duty of truck tires.

A couple, heading down from the checkpoint, stopped, and offered a better plug than our impromptu creation, and a fresh can of Fix-a-Flat. The tire inflated, air was not heard, and we thought we were good to go.

We rolled about three feet, and the “giant Nelson’s Sparrow” sound returned.

Good thing we were about 15 miles from a phone (and yes, you can forget about cell service in these parts, as we knew).

Two loggers, their workday cut short by a broken part, happened by, and we hopped in. They generously took us in the opposite direction they were heading to deliver us back to the Abol Bridge Campground. A very insightful conversation about logging, the economy, and the possible National Park/Monument ensued.

“Umm, hi again. Can we use your phone?” I called Ford Roadside Assistance.

We waited for the tow truck confirmation. It didn’t come.

Not wanting to tie up the phone line incase that confirmation came through, I paid for the wifi and texted Jeannette. She called Ford. Apparently, the service was on hold.

I’ll make a long story short: Ford Roadside Assistance sucks. When we finally got a tow truck (thanks to a tip from our very helpful waitress and calls from Jeannette), it turned out that John – really the only option – told them what it would cost and they refused to pay it, even though I had already approved ANY cost overruns beyond their allocated $100 for towing. I knew $100 wasn’t going to get us very far. Of course, I would have liked to have known they refused it.

At least there was beer on tap – we needed it! – and a very good plate of poutine. More great conversation, with hikers just starting on the AT, and another just about finished, and the staff of the campground and restaurant passed the time.

Luckily, John was available, picked me up at the campground and we went up to the car (Ford told me to return to my car – in the middle of nowhere, without any kind of phone service – and wait for their tow truck which was still not arranged), loaded it up, and he entertained us with some really great stories on the long drive to Medway for the new tire.

A $110 tire, a $245 tow (yes, the complaint has already been filed with Ford), and 5 ½ hours later, we departed for the long drive home. It had just become a very expensive state bird!

To be honest, the “adventure” and the quality of the conversation (not to mention the beer and poutine), the clichéd but very real “kindness of strangers,” and the overall experience somehow turned into a highlight, rather than a lowlight.

That being said, as I mentioned to Evan as we stood there staring at the irreparable tire after the plug gave way “Good thing we actually saw the woodpecker!”