The third Birds on Tap – Roadtrip! tour of 2016, with our partner the Maine Brew Bus, ventured south to the unique habitat of the Kennebunk Plains…and a couple of very unique breweries! 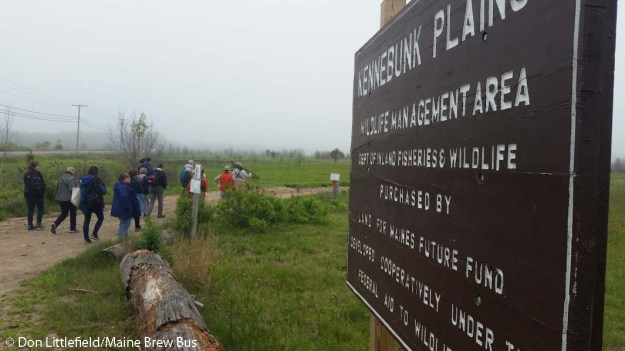 A managed blueberry barrens, one of the few habitats for grassland species in the region, the Kennebunk Plains Wildlife Management Area is home to one of the state’s largest (if not the absolute largest) concentrations of Grasshopper Sparrows (a state Endangered Species), Vesper Sparrows, and Upland Sandpipers (a state Threatened species). Additionally, large numbers of Prairie Warblers, Eastern Towhees, Field and Savannah Sparrows, and much more call this special area home.

Unfortunately, due to a likely combination of a light breeze, dense fog, and the mid-morning arrival of our group, overall bird activity was suppressed, and all of the first time visitors were left with only a taste of what the Plains can offer. Our last stop, a pocket of activity that included a couple of Field Sparrows and Prairie Warblers, a confiding Chestnut-sided Warbler and Common Yellowthroat, and singing Gray Catbird and Brown Thrasher hinted at what one could expect here on a future visit. 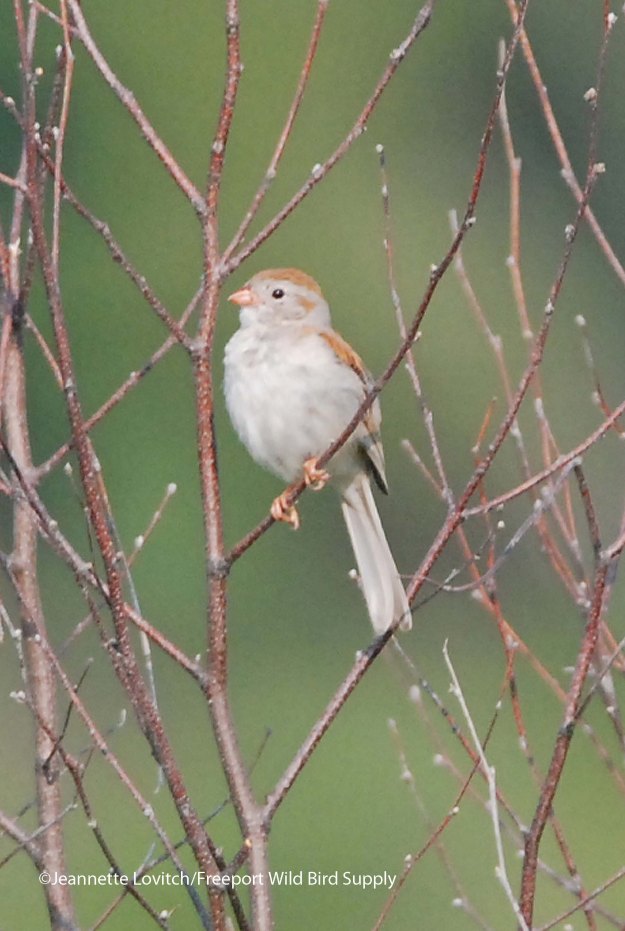 But we did see just about all of the plains denizens, expect for Upland Sandpiper which just a couple of people were able to glimpse as a displaying bird disappeared into the fog. I warned the women in our group not to immediately slug the guy next to them if they thought they were being wolf-whistled at. Unfortunately, only one or two distant “Uppies” sounded off, limiting the potential for any such confusion. This is what it would have looked like.

On the other hand, Vesper Sparrows were incredibly conspicuous. Many were foraging in the open in the dirt roads, others were singing, and it was the most frequently observed bird on the day…

…and near the end of our birding time, we finally got a good look at a Grasshopper Sparrow. Perched on a rock along Maquire Road, the sparrow was spotted by a member of the group and enjoyed by all. The subtle orange-buff tones in the face contrasted nicely with the gray day. 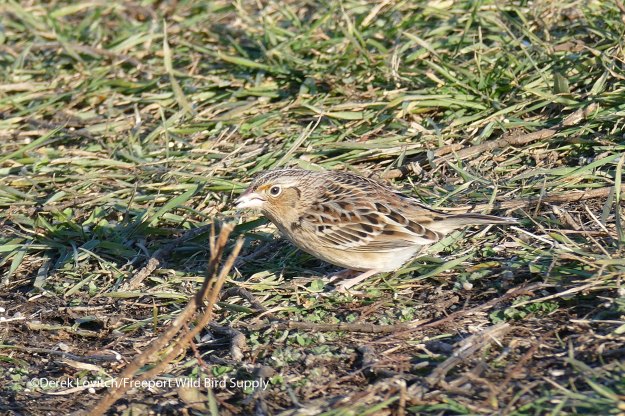 As usual, Eastern Kingbirds were conspicuous. 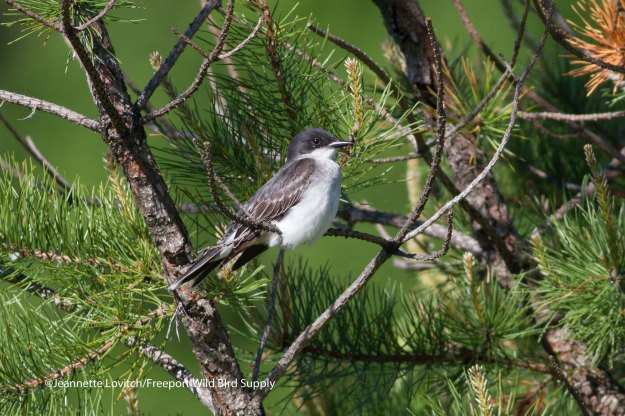 And we were treated to some good looks at spiffy Prairie Warblers.

As we walked through the plains, occasionally lamenting about the lack of birdsong and the first light showers of the day…

…a streaking larger animal caught our eye.  And while it’s especially true on a “slow” birding day, as is often the case when you’re out birding, the highlight of the day wasn’t even a bird. We soon realized our speedster was an Eastern Coyote (or CoyWolf) that treed a Gray Squirrel!  We watched the coyote as it tried every angle, leaping a short distance up each small trunk of the young Paper Birch tree. The squirrel, frozen at the very tip of the tallest stem, peered down, no doubt hoping that its chosen stem would not waver. The coyote, focused on the hors d’oeuvre, was oblivious to our presence.

Eventually, we caught its eye, or perhaps its nose, and it turned and sprinted back to the trees. The squirrel remained frozen. We wondered for how long.

Of course, even though I predicted the coyote would cross the two-track ahead of us, I failed to take my eyes off the captivating situation long enough to have my camera ready!

We also had a special guest aboard, Caroline Losneck, who was on assignment to record a story on our unique birding and beer-ing tours for MPBN. I think Caroline had more recordings of me making desperate pishing and squeaking sounds than actual bird sounds today, unfortunately. 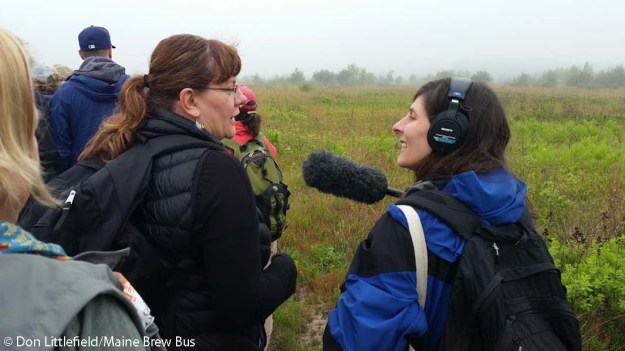 As steadier rain arrived, it was time to head back to the bus, and turn things over to Don. The good thing about brewery tours, is you are guaranteed that the beer will be there (unlike, sometimes, the birds)!

And the beer – and fresh brick-oven pizza for lunch – was waiting for us as we arrived at Funky Bow Brewery and Beer Company in Lyman for the first stop in the brewery half of the tour (which we learned was the only place on Trip Advisor in the town of Lyman!)

Co-founder Paul Lorraine greeted us and introduced us to the brewery, their mission, and their history…

…then the pizza oven….

…and last, but most certainly not least, the beer! 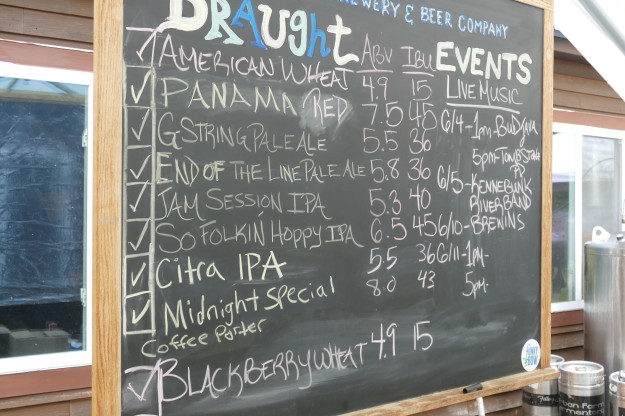 As we sampled four of the eight beers on tap, Paul added the color commentary. Don listened intently. 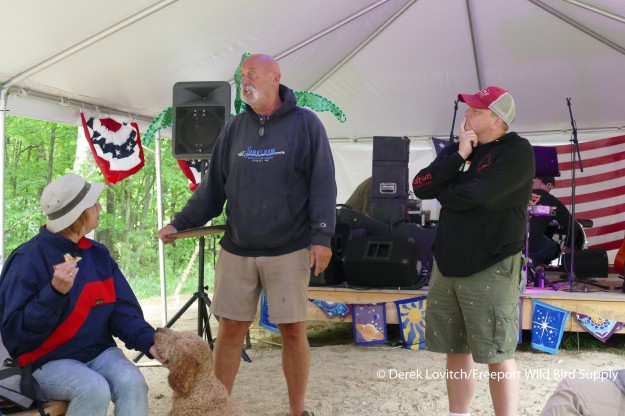 I chose to sip on their Citra IPA, one of my new favorites from Funky Bow, and G-String Pale Ale – still my favorite offering from the brewery. I just find it so refreshing and perfectly balanced, with a nice hop bite for a pale, but smooth and easy-drinking throughout.  I hadn’t had their American Wheat before – which I found pleasantly hop-forward for a wheat, and gave their new Blackberry Wheat a try. I am not usually a fan of fruited beers (which is why I like tasting samplers at breweries to try new and different things out of my usual comfort zone), but I found the tartness of the blackberry just subtle and suggestive enough without being overwhelmingly fruity…and admittedly, the color was very appealing (second from right).

Next up was Banded Horn Brewing Company in Biddeford. The “Eurotrash trifecta” of European Starling, House Sparrow, and Rock Pigeon greeted us, while Chimney Swifts fluttered overhead. 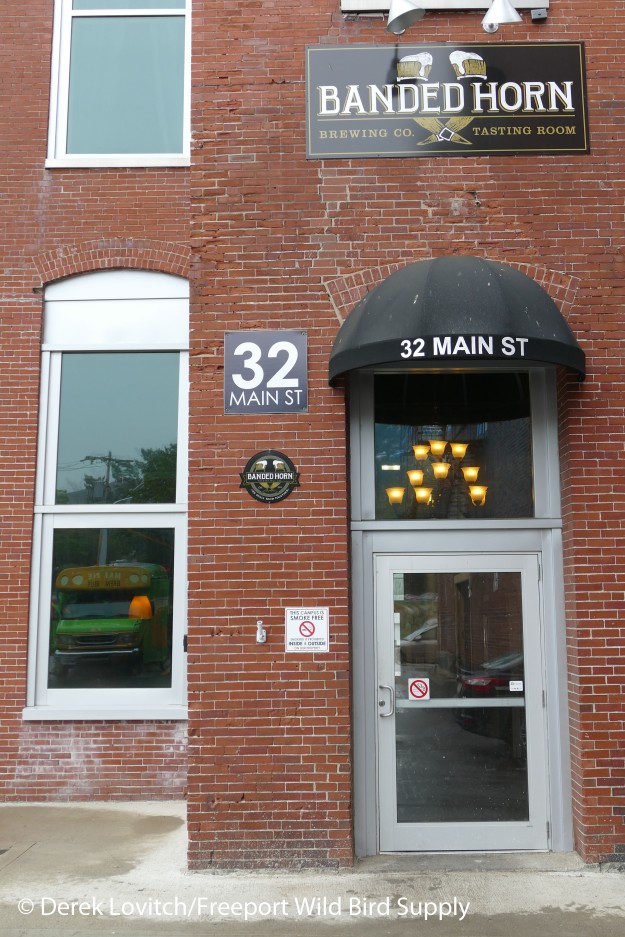 Entering the beautiful restored mill, a much different atmosphere than the rustic setting of Funky Bow, we were greeted by brewer Bob Bartholomew, who just happened to be a wildlife biologist in his former life.

In complete coincidence to the title of our tour “Grassland and Grains,” which was chosen for alliteration more than anything, Bob focused on the grains – malted barley in particular – that go into beer. We sampled several malts from bready pale malt to rich and roasty chocolate malts.

Breaking down beer into components helps you understand the subtle tastes and differences in each brew, not unlike how we use subtle differences in shape and structure to sort sparrows into family groups before we go about specific identification.

We also sampled the edible white spruce tips (Bob informed us they are exquisite deep-fried, something I undoubtedly will be testing in the near future) that go into their Green Warden beer, learned the differences between lagers and ales (it’s like warblers verses sparrows!), and sampled four of their current offerings. 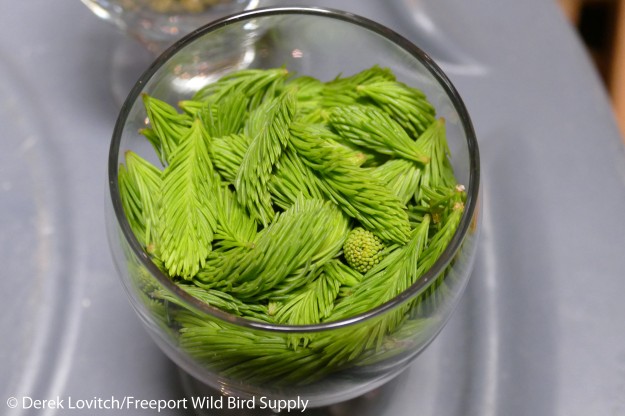 We began with their light-bodied but flavorful Pepperell Pilsner (local pilsners are a rarity in Maine), followed by Wicked Bueno, a Mexican-style lager using corn to bump up the sugar content pre-fermentation without adding too much body. Their flagship IPA, Veridian, was up next, a West Coast style IPA and finished up with their Austry Imperial Lager with Maine-made bitters. This is one of my favorite brews by Banded Horn, as it brings back memories of sitting on the veranda of the Asa Wright Nature Center, watching hummingbirds, honeycreepers, and tanagers at the feeders, shortly after finding a couple of drops of Angostura bitters added complexity and flavor to the otherwise bland and boring (but thirst-quenching) lagers typical of the region. (Yes, it always comes back to birding!)

As we begrudgingly began our return northward, conversations about new birds, new beers, and new adventures continued. And plans were made for the next two Birds on Tap – Roadtrips! in August (a second date was added by popular demand, and this is before Caroline’s story airs with hours of recordings of my pishing!) 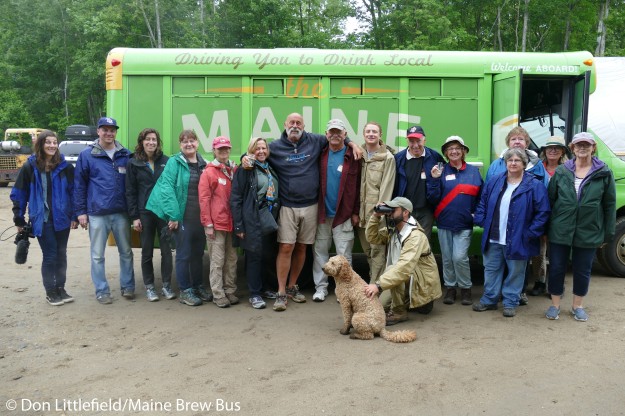 (Note: As you may have guessed from the bright sunlight, these bird photographs were not taken during the Roadtrip tour…but all except the Grasshopper Sparrow were photographed in the Kennebunk Plains by Jeannette).