A couple of weeks ago, I wrote about what a hotspot of Simpson’s Point in Brunswick currently is. I also predicted that it was about due for another rarity. And recently, with increasing numbers of migrant ducks, my Rarity Fever was further stoked.

Last Thursday, I counted an amazing 2600 Black Scoters – a really ridiculous count for interior Casco Bay. After enjoying a growing number of Palm and Yellow-rumped Warblers among other migrants (first of year Swamp Sparrows, etc) at Florida Lake this am, I took advantage of the finally-calm conditions to visit them again, and perhaps do a little sorting through the masses.

Those scoters were still present this morning, and the goodly number of Horned Grebes (20+ each day) continued. Horned Grebes molting into breeding plumage can look a lot like vagrant Eared Grebes, especially as the blond tufts are still growing in. I was scanning a small raft of Horned Grebes, thinking about finding the second Eared Grebe record for here.

That’s when I found…a Western Grebe! Not only was this a significant rarity, it was actually a “State Bird” for me (the first time I have seen the bird in the state). A long overdue one that was becoming a nemesis of sorts, it was #6 on my latest predictions list for my next 25 species to see in Maine. And of course, it is always sweeter and more rewarding for me to find it for myself.

It was not close, but the distinctive shape and profile was unmistakable. The relatively short body riding low on the water – like all grebes – looked disproportionally small as that long and skinny neck was craned up. The long bill and fairly large head (relative to the width of the neck) further added to the bird’s distinctive profile.

Upon closer look, the two-toned black-and-white neck and face was obvious. There’s little doubt as to this bird was a member of the genus Aechmophorus – Western and Clark’s Grebe. Luckily, as the active bird moved a smidge closer, I was able to scrutinize several features that ruled out Clark’s. For one, the black hindneck was evenly wide, not narrow and thin, and not pinching toward the top. Although it was too far to see the details of the face, it definitely did not look “white-faced” and I certainly could not see the eye (On Clark’s, the eye stands out in the white face in breeding plumage, on Western, the eye is harder to see as it is enshrouded by dusky black). The bill also looked yellow, but not as bright “banana yellow” or even orange-y like Clark’s.

But it was far, and perhaps a hybrid could not fully be ruled out. However, with one record of Clark’s for Maine (and all of New England) and with at least a dozen or so records of Western for Maine alone, there’s a fair “percentage play.”

Anyway, like many birds at Simpson’s Point, it was off to the east, and the light was not great in the mid-morning. After diving several times, it began to preen, and then loafed for a bit before tucking in its sinuous neck and falling asleep (had I scanned while it was asleep, I probably would have never picked it up!). In between, I managed to rattle off a bunch of phone-scoped “documentation” shots. Well, for what they are worth… 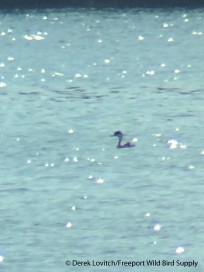 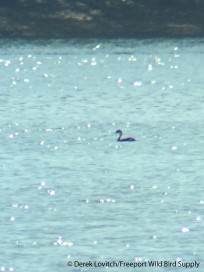 And here’s another lousy photo, from 4/21. However, it was in better light, so the bill color is a little more evident. However, the overexposure of the distant phone-scoped photo makes the face look much more whiter than it really is.