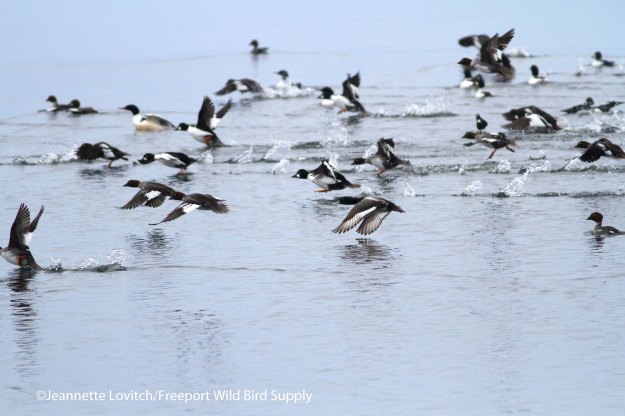 Simpson’s Point in Brunswick, at the northern end of Middle Bay (Delorme Map 6: C-3) has become one of the best waterbird-watching spots in Casco Bay over the last few years. That trend continues this spring, with outstanding concentrations of waterfowl.

While there might not be a rarity or an addition to your year list right now, I highly encourage a visit to see the concentration (a scope is highly recommended), and it is certainly ripe for a rarity to be discovered!

I visited the point twice times this week, each yielding some remarkable counts (my attempts to visit it for a third time today was thwarted by unexpectedly dense fog). The first number is the count or estimate from 3/26 with my Saturday Morning Birdwalk group, and the second is from Monday, 3/27 with Jeannette.

While more birder attention has definitely worked in its favor, it was always a well-known duck-watching hotspot. However, these numbers are outstanding, even based on the renewed attention to this spot over the last few years. I wonder what has changed? Sure, this winter the water was open and that kept the scaup around, but what is attracting all of these scoters? Is there a new food source? Is there a lack of some food somewhere else?

But it’s the oversummering birds (exceptionally rare for the state birds in summer like scoters, Red-necked Grebes and Red-throated Loons, and Long-tailed Ducks) that really suggest the uniqueness of this area. While rarities over the past few years, including Eared Grebe and Pacific Loon, have put this spot “on the map,” it is the numbers of common birds and small numbers of oversummering “winter” ducks that is most noteworthy. Is it nothing more than more birders paying more attention in mid-summer? I certainly am.

So go out and have a look, and perhaps you’ll get there on the day the scaup are close enough to pull out a Tufted Duck!

Meanwhile, nearby Wharton Point is always worth a visit, and can easily be combined with a trip to Simpson’s. Currently, it is hosting more typical-for-here large numbers of dabblers, led by American Black Ducks (800/495). On 3/28, Jeannette and I teased out a pair of American Wigeon and 1 Green-winged Teal from the masses, while 8 Dunlin were on the flats.

So in between the excitement of new arrivals, hawkwatching, and the anticipation of the diversity of May, I know I’ll be taking some more time to do a little local ducking!