I love birding Nova Scotia, but it’s been a few years since I was last there. This year, with the rebirth of ferry service from Portland, I knew it was time; there were no more excuses.

I finally got a chance to make the voyage this week, with two primary agendas: explore the birding potential of the Nova Star (and scout for the potential of making this a new weekend tour), and visit with my friend Eric Mills for a little southern Nova Scotia birding.

Ever since we lost the Scotia Prince, I have been hoping for a bird-able boat that traverses the Gulf of Maine. The short-lived, high-speed catamaran that replaced the Scotia Prince was of little value – it had almost no outdoor space whatsoever, and it moved far too fast.  With the return of ferry service, and this time with a ship that moved at a more reasonable speed for birding, I was optimistic for a new pelagic birding platform.

I waited until August to take my trip, as the warmer late-summer waters host more pelagics now (especially birds that arrive from their sub-Antarctic breeding grounds). Furthermore, the high cost of a trip on the Nova Star would not permit me to take many journeys this year, unfortunately (and will clearly be the biggest hurdle in running a tour that utilizes this boat), so I had to choose my dates wisely. 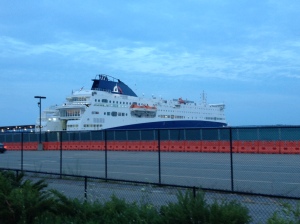 Boarding at 8pm on Tuesday night for the 9pm departure, I settled into my spartan, but plenty comfortable, bunk. 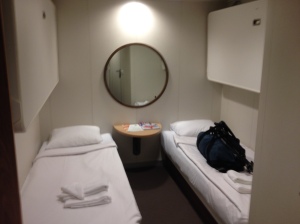 Next, I walked every corner of the boat in search of the best location for my birding. There’s no access to the top deck, the bow, or anywhere close to it on the sides. The only forward-view was the piano bar with occupied tables, and less than a desirable view to the sides. Really, the only places to view are outside decks on the stern. Not expecting a big ol’ cruise ship to attract many following birds, I was concerned about the birding potential. Quite concerned (especially at this price).

Come morning, the viewing locations were the least of my concerns, however. We were socked in with fog, too thick to see a thing. 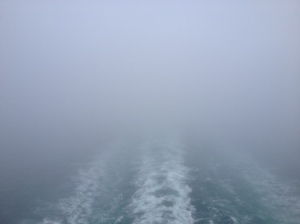 It wasn’t until we were about to enter Yarmouth Harbor that we finally exited the fog, but other than a single Northern Gannet, there would not be any seabirds for me this morning. 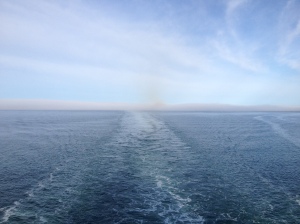 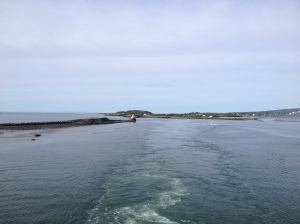 Entering the harbor, however, the sun was shining, gulls were busy with newly-arrived Herring trawlers, and the mudflats were lined with shorebirds. 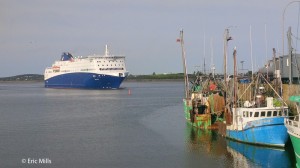 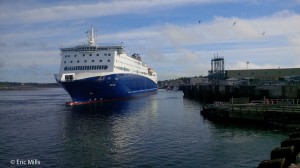 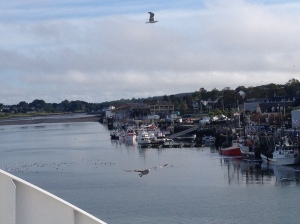 After disembarking (and I must say, having the relatively few walk-ons wait until every car had offloaded was just stupid; I get why we couldn’t walk down the deck with traffic, but had we been allowed to go first, we all would have been clearing customs before the first cars were being offloaded, but I digress), I met Eric, who I had not seen in four years; it had been way too long.  After the usually greetings and pleasantries, we of course immediately began birding.

The first order of business was Yarmouth Harbor, where I was evaluating the birding potential of a vehicle-free tour. Good shorebird habitat, with decent numbers of Black-bellied Plovers and Short-billed Dowitchers were close by, and we encountered perhaps the last two Laughing Gulls (rare but regular in Nova Scotia) from the fall-out of this species that was caused by Tropical Storm Arthur – the first addition to my Canada list on the trip. A couple of thickets and small parks hold potential for migrant landbirds. 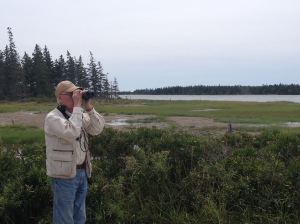 Moving on, we drove up and down the Yarmouth Bar (Nelson’s Sparrow, Peregrine Falcon, more shorebirds) and north to Mavillette Beach Provincial Park (more Nelson’s Sparrows). After dipping on two Black Skimmers that had also been lingering post-Arthur, we met up with local birder Ronnie D’Entremont for a shorebird survey at Cook’s Beach on Pinkney’s Point. Well, the survey was easy! All of the birds were jam-packed into one gravel spit due to very high tides. The estimation, however, was not easy, but we came up with about 1500 Semipalmated Plovers (a very impressive count), joined by about 750 Semipalmated Sandpipers, 100 Least Sandpipers, 51 Short-billed Dowitchers, 20 White-rumped Sandpipers, 17 Black-bellied Plovers, 2 Killdeer, and 1 Ruddy Turnstone. 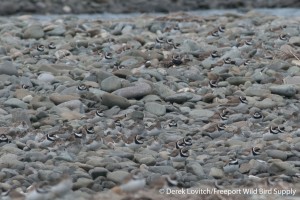 What was particularly cool about the roosting Semipalmated Plovers was that once we rotated to the side of them, we saw how carefully lined up they were in little, linear depressions in the cobble beach. 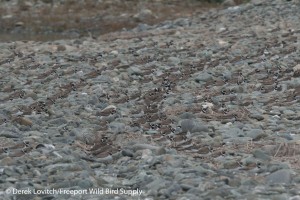 One last check of Yarmouth Harbor – OK, there are three lingering Laughing Gulls, apparently – and then it was beer o’clock and dinner time at Rudder’s brewpub.

On Thursday, the birding hotspot (to say the least) of Cape (Sable) Island was our destination, and it surpassed all expectations!  Jeannette and I birded here in late September during our first visit to the province beyond Yarmouth 8 years ago, but here in August shorebird season. it was in its full glory.  First, we twitched a vagrant American Avocet that had been present for about a week, finding it within seconds of pulling over. 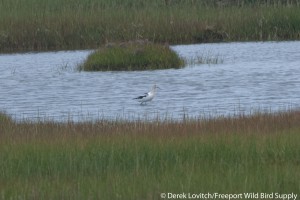 While we missed peak shorebird density at Hawk Point by perhaps as much as an hour, one of the 4 pairs of American Oystercatchers in the entire province were visible, as were plenty of shorebirds, with a combined guesstimate of several thousand Short-billed Dowitchers, Black-bellied Plovers, Semipalmated Sandpipers and Plovers, with smaller numbers of Lesser and Greater Yellowlegs, Least and White-rumped Sandpipers, along with handfuls of Ruddy Turnstones, “Eastern” Willets, and Sanderlings. Only one Whimbrel, however, and no Hudsonian Godwits.  I was still impressed – especially if we had missed the peak – and thoroughly enjoyed the waves of shorebirds streaming overhead and out of the bays, heading towards their high-tide roosts on the sandy barrier island of Cape Sable.

Next up was South Side Beach at Daniel’s Head. Wow. Simply, wow. We knew there was a Buff-breasted Sandpiper here, and we knew a lot of shorebirds roost here at high tide, but we definitely did not know there would be this many birds!  The narrow strip of sand was coated with shorebirds – the best Eric has ever seen here, and we estimated around 10,000 total birds!  Semipalmated Sandpipers, Sanderlings, Least Sandpipers, and Semipalmated Plovers led the way, followed by goodly numbers of White-rumped Sandpipers, 3 Black-bellied Plovers, 2 “Eastern” Willets, and 1 Short-billed Dowitcher. 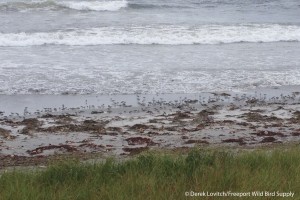 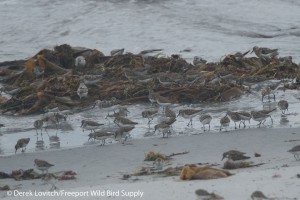 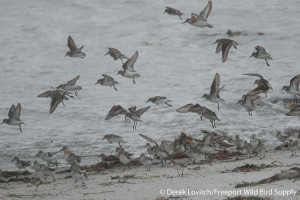 Oh yeah, the Buff-breasted Sandpiper was there, too. 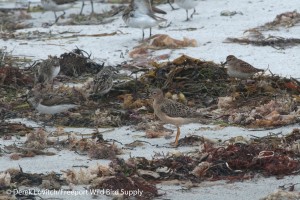 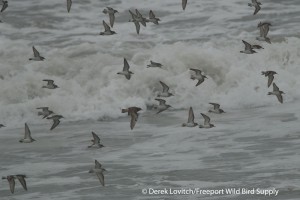 After lunch, we picked up another staked-out rarity in a juvenile Yellow-crowned Night-Heron, as my Canada list grew nicely. Back at South Shore Beach, we found very few shorebirds – another birder saw two harriers flush them out, so Eric and I considered ourselves incredibly lucky to have hit the beach at prime time. While we were there chatting, small numbers of bird began to return as the tide just barely began to recede.

The weather forecast for the day had been a concern, leading us to expect rain on and off throughout the day. But we lucked out, as the rain stayed away until around 2pm, at which time we were already working our way back to Yarmouth, with a detour to Lower West Pubnico.

My short trip was coming to an end on Friday morning, but the most important part – professionally anyway – was about to begin. Eric and I said our goodbyes (after a quick check of the harbor once more), promising it won’t be nearly as long this time until we see each other again, and I boarded my vessel for the return trip.  Unfortunately, the view in the harbor, and for quite some distance offshore, looked familiar. 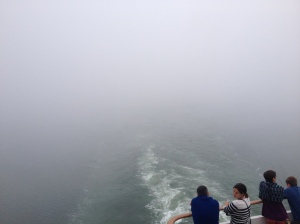 We departed at 10:00am ADT with nearly zero visibility.  A small hole in the fog just outside the harbor presented a Red Bat that circled the boat a few times before moving on.  It wasn’t for an hour and a half that the fog lifted enough to see much else, and a short-lived hole produced several Great Shearwaters and Northern Gannets: a frustrating tease as the fog closed back in.

We were in and out of dense fog for the next two hours, but whenever there was visibility, I was on deck, scanning the gentle (today!) seas. Great Shearwaters, Northern Gannets, a few Wilson’s Storm-Petrels, and two Atlantic Puffins were welcome, and then several Leach’s Storm-Petrels. I could only help but wonder what was out there as thick fog once again swallowed the boat, and I set off to find some lunch (the buffet was not very good, especially for a hefty $17…it felt like a mediocre college dining hall; breakfast was only marginally better).  Sitting at the window, doing my best to get the most out of my dollar, the fog started to clear, and views of Leach’s Storm-Petrels sent me scrambling for the deck at 1:10 EDT. I sat down again at 6:25 EDT.

When the fog cleared, the winds were light and the seas were fairly calm, and birds were everywhere. As it turned out, my scouting of birding locations worked out – the corners of Deck 9 provided a decent view from about 2:00 (using the bow of the boat as 12:00) on out. I couldn’t see what was crossing the bow, but I could pick birds up before and after. And, the height of boat gave me great visibility to see well away on either sides, where I spotted most of the action. 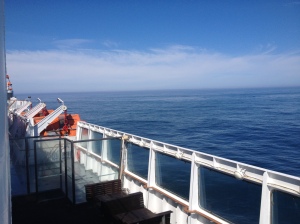 Nonetheless, I would not have guessed that the birding would have been this good!  Shrouded in fog, I was beginning to think my money had been wasted. By the time we arrived in Portland, I was thinking about how I could bring a group aboard and when I could afford to take the trip again (a rather large hurdle, especially for a tour).

I swept all of the expected tubenoses (4 shearwaters and 2 storm-petrels), with the count of Leach’s Storm-Petrels most impressive. While most phalaropes were too far to ID, there were plenty of Red Phalaropes to be seen. Four Fin Whales, 9 Mola Mola (including a patch of five in close proximity), a pod of wake-riding Atlantic White-sided Dolphins, and a breaching Blue Shark were among the non-avian highlights.  At nearly the mid-point of the crossing, well south of Mt. Desert Island, a wayward Yellow Warbler came aboard.

While the height of boat preclude great photography opportunities, I did alright with “documentation” shots of Leach’s Storm-Petrels as they flew around, bounded like sea-worthy nighthawks. 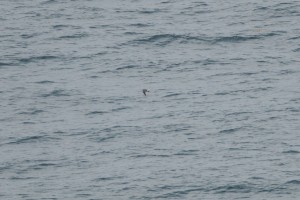 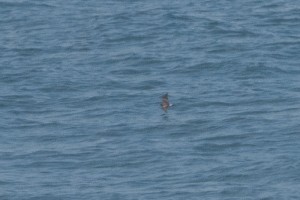 Great Shearwaters, however, were a little more cooperative. 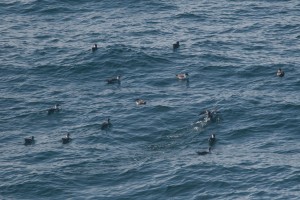 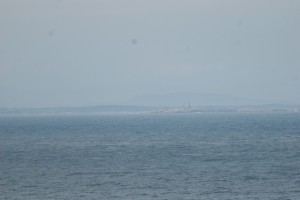 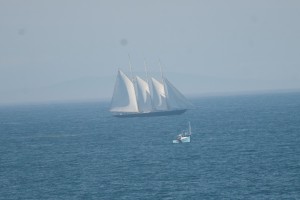 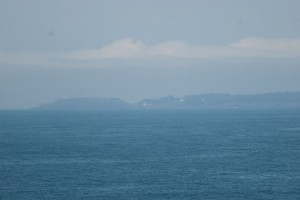 So while the birding situation is not optimal, clearly the boat passes through some productive waters. I’m sure not every trip will hit this much activity (‘tis the nature of pelagic birding), but at least my concerns about the feasibility of birding (at least for a small group) from the Nova Star are alleviated. Fog and inclement weather will always be a concern; this is the Gulf of Maine after all.  As for a future weekend tour, I have a plan in mind. Let me give this some thought (and make some calls). But at the very least, suffice to say that birders traveling to and from Nova Scotia, or those just looking for a ride to sea, have another option now, albeit an exceptionally expensive one.