Our Saturday Morning Birdwalk surveyed the waterfront in Freeport and Yarmouth.  On Sunday, Kristen Lindquist and I enjoyed an epic white-winged gull show in Portland, before working our way around the Cape Elizabeth shoreline.  Then, on Monday, we birded from Biddeford Pool through Scarborough Marsh with Snowy and Great Horned owls, Rough-legged Hawk, and Ruddy Turnstones among the many highlights.

Further south, Jeannette and I covered Kittery through Wells, as is our tradition on the first Tuesday in March.  Another exceptionally productive day was enjoyed, including two more Snowy Owls and a Common Eider of the northern subspecies, borealis.

Wednesday was spent dealing with various car issues and seed delivery, so birding was limited to the woods near our house, and the feeders of course.  Same for Friday, where at Hedgehog Mountain Park, a mere 7 species was actually the most that I have detected in a couple of months there.  In between, I was back in Portland and Westbrook on Thursday, and although the Westbrook riverfront was a disappointing, the continuing white-winged gull show in Old Port more than made up for it.

While “new arrivals” were few and far between this week as bitter cold continues, there were definitely signs of the season.  Waterfowl are obviously on the move: Brant, Canada Geese, Mallards, and American Black Ducks are returning in numbers, while the concentrations of seaducks, especially all three scoters, was greatly reduced as these birds have begun to disperse – if not actually migrating north.

For the first week of March, I recorded very few “first-of-years” this week: Great Horned Owl, Yellow-rumped Warbler, and Fox Sparrows.  Of those, only the sparrow is likely a true migrant; the owl is a resident, and the warbler likely wintered locally.  American Robins were definitely on the move, however, with several flocks noted moving northbound (at least at the given time), and American Tree Sparrows also seem to be on the go.

New reports of Snowy Owls – especially inland – likely included northbound migrants.  While all three of the individuals that I saw this week seemed to be birds that were continuing in a specific area for several weeks or more now, the fact that Kristen and I only saw one bird in a very thorough search at Biddeford Pool (four had been present for a couple of months now) suggests birds are already departing. Northern Shrikes – such as the one that briefly visited the yard here at the store on Thursday (our second of the season) are also likely migrating right now.

In the woods there is a different story, however, as even the local residents are a little less active vocally right now than we would expect.  I have yet to hear a Brown Creeper sing – although I am seeing them on regular basis – and Golden-crowned Kinglets remain very few and far between.  And other than goldfinches and resident House Finches, finches remain virtually non-existent.

But all of this is about to change, and my guess is that it will change rather rapidly.  In fact, with the winds turning south today, I wouldn’t be surprised if a few Turkey Vulture and Red-winged Blackbird reports trickle in this weekend.  And once the snow really begins to melt (especially to our south), expect those floodgates to really open!  (Any day now…any day now…) 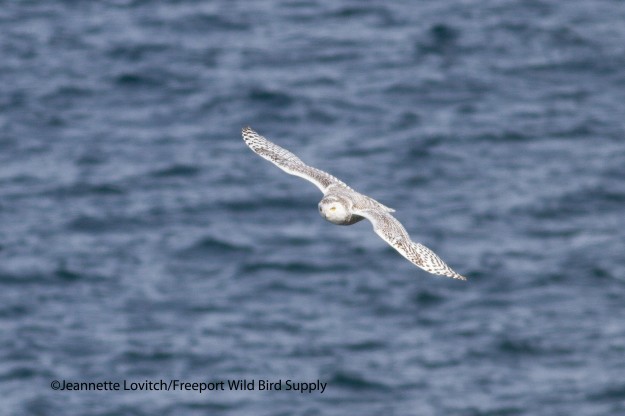 Snowy Owl, The Cliff House, York, 3/4/14. As you have seen on this blog, our store’s Facebook and Flickr pages, etc, most of our Snowy Owl photos this winter have been of relaxed birds, often with their eyes closed.  Few have been “perfect” shots, whether in lighting or resolution.  And we’re proud of that!  To us, the birds ALWAYS comes first, and we pride ourselves in minimizing any chance at disturbance.  Unfortunately, this bird was sitting close to the parking lot and we spooked it before we knew it was present.  A pair of crows likely also affected the bird’s immediate response.  As it flew away from both us and the crows, Jeannette snapped some photos, as the bird first flew straight out to sea – thereby ditching the crows – before returning to land a short distance away.  We backed off and left it alone.  With a lot of unethical and selfish behavior occurring – as always – around charismatic owls around the country, we support the idea that the circumstances of photos be explained when it shows a behavior that may have been modified by our presence or behavior.

2 thoughts on “A (Very) Early Spring Week in Review”