With a busy tour and travel schedule once again this fall (every year I say I will schedule fewer things in my favorite season to bird in Maine!), my time at Sandy Point is at a premium.  Since it takes certain conditions to make birding here worthwhile, I get quite excited when conditions line up for a good flight.

I was very anxious to arrive at “my office” on Tuesday morning.  Moderate northerly winds overnight turned to the northwest, resulting in an exceptional flight over and through SandyPointBeach come dawn.  Here is the morning’s scorecard:

Simply put: wow!  That was one heck of a flight.  In fact, it was downright overwhelming at times – flocks of flickers, waves of warblers, packs of waxwings.  It was almost too much to count, and thankfully, Jenny Howard agreed (OK, so maybe I didn’t exactly ask, but beg) to tally flickers for the busiest part of the morning for me. That helped a whole lot.

After a flood like yesterday morning, I am not disappointed by the slow, but steady trickle through the point this morning.  It was a more manageable number to count, with quite a few birds lower than yesterday, and often only a few at a time; it was easier to sort through.

I’ll admit, I wasn’t expecting it to be quite this good.  And despite really only a “good” flight, parulas had their second highest tally – I didn’t think there would be any left after yesterday’s flight!  And yes, this more manageable flight was more “enjoyable,” if considerably less awe-inspiring.

So, what made me have lower expectations for today?  Let’s go to the radar!

First, the massive flight overnight Monday into Tuesday that led to all of the records yesterday.  I have included the 10pm, 12am, 2am, and 4am radar and velocity images: 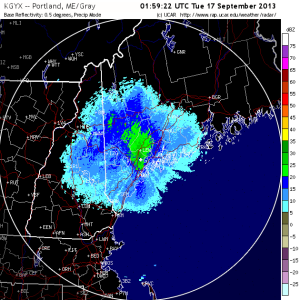 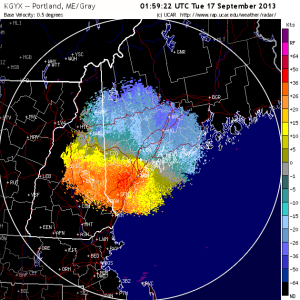 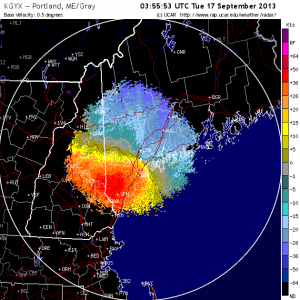 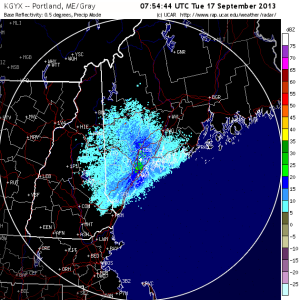 Combined, these images show a very strong flight all night long, with a lot of birds offshore come twilight, and likely a lot of birds arriving at the coast come dawn.  Looking at that image when I went to bed, and when I awoke, coupled with the light northwesterly winds all night left no doubt that things would be hopping at Sandy Point.  And, as we now know, there most certainly was. If you see a radar image that looks like this – go birding in the morning!

In fact, it was a good day all-around for migrants, and everywhere we looked up yesterday, raptors were on the move. 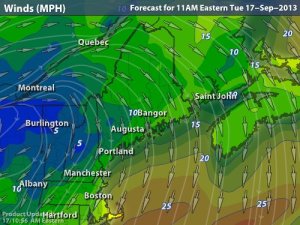 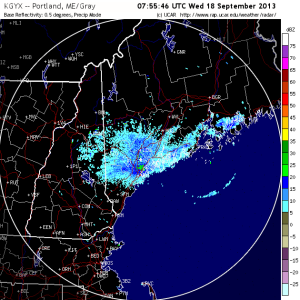 As night fell Tuesday night, clear and mostly calm conditions let birds take to the air once again – but not nearly as many as the night before. Notice how much smaller the area of return is, and how much less dense? Meanwhile, the velocity image was much less distinctly fast-moving, north-to-south as the previous night (of course, with little to no wind, the ground speed of the birds would be less anyway) – a little more ambiguous than the night before.  Furthermore, with a forecast for westerly winds (not as good as northwesterly), and the chance that they would become southwesterly by dawn, I did consider skipping Sandy Point this morning, but with the rest of the week looking even less productive, I knew I had to give it a go.

And, obviously, I am glad that I did.  But upon returning to the store, and checking those above radar images once again, I find it a bit odd that the radar image (small in diameter, but very dense) did not translate to a more distinct velocity image.  Perhaps there was a lot of slow-moving stuff up there (insects, pollen, dust, etc) that clouded the motion of the birds.  Either way, it was a good night for flying, and if it’s a good night for flying, it’s a good morning to be at Sandy Point!